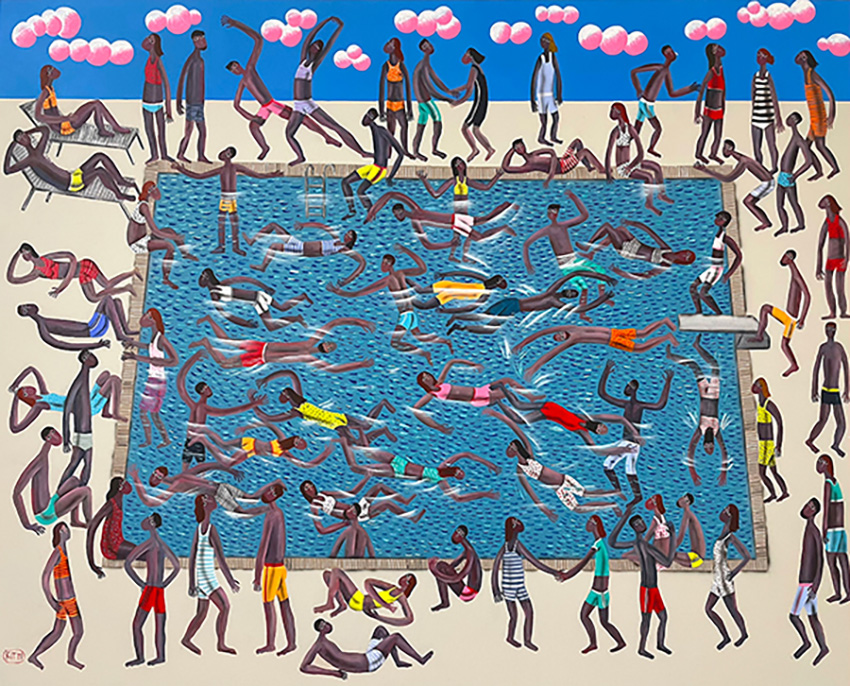 Reminiscent of photographic portraits, two couples – four friends – are posing together under a delicate summer breeze that moves lightly through their hair; Another couple is caught into an impromptu tango in the laundry room; Two pally men are leaning onto each other during an afternoon nap on the sofa; And a herd of horses are galloping with vitality, resonating with the summer pool teemed by bodies in full Dionysian sensuality.

“Style is a simple way of saying complicated things,” said Jean Cocteau. His words best exemplify Kitti’s world, in which the imagery of life is depicted as it is – in its simplicity.

Born in 1976 in Thailand, after obtaining his Bachelor of Arts degree in Bangkok, Kitti started to develop a unique artistic dimension which gradually evolved towards a language of graphic signs and simplicity. Elaborate and superfluous styles are whittled in order to arrive at the sheer essence of each image. The skillful mastery on the modulation between abstraction and the real world then enables Kitti to infuse his personal journey into his art: as an autobiography which seeks to get beyond the borders of the self and become no longer self-centered, but rather a symbol of everyone’s potential life.

Kitti’s art provokes with extreme delicacy. It is all a calling forth rather than a sting. Spontaneity and immediacy become the triumph of interiority and communicability. It’s in the apparent simplicity of his subjects, bi-dimensional figures of people or animals represented with curved lines, that lies his visual strength. Paradoxically combined, realism and stylization correspond to the maximum of individuality and the maximum of universality. Those who are capable of grasping the contrast in Kitti’s art will find a further meaning: there’s an element always immanent in reality he represents. Endowed with the quintessence of vitality, his figures are literally imbued of this substance, rather than being obfuscated by a superimposed concept.

Kitti’s figures never sit still – that’s perhaps the reason why we are in love with his art: not for the alleged ease, but for the dizzying accumulative frenzy, a surrounding sensation that brings us “inside” the painting and energizes us while it pushes us out. The movement of bodies is a tangle with an entropic central vortex, it opens up for us the space far beyond the canvas.

Master of representing different points of view, Kitti is also a master of relationships: between subject and object, between past and future, between action and desire. The complication of reality becomes easy on his canvas. In the scenes, he represents all the characters meeting in a unifying embrace, with the hope that the engine of life, “the desire”, will never fail.

The exhibition is curated by Michela Sena.