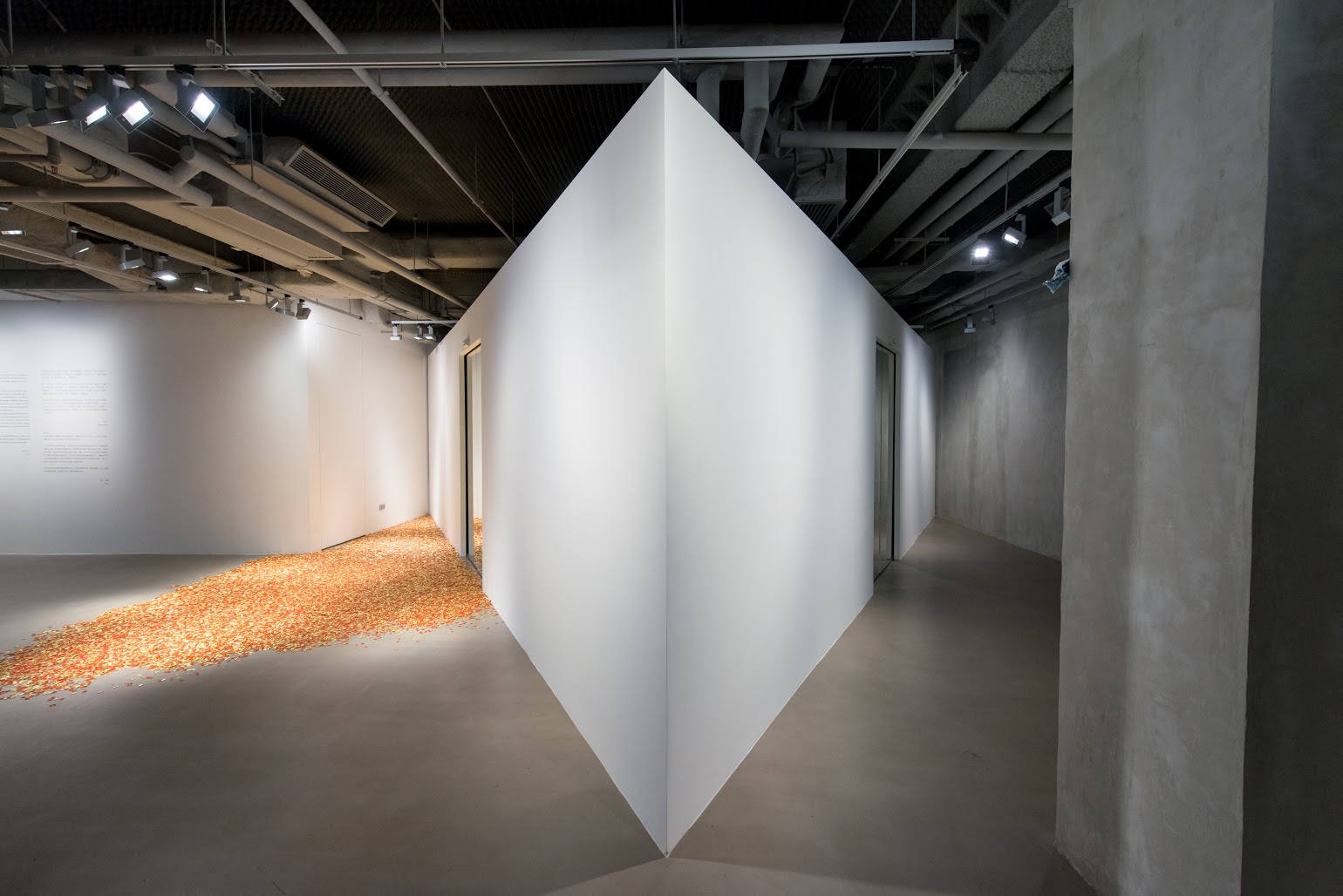 This statement assumes that the idea of a social fabric has already been lost: the exhibition leaves aside the complexity and diversity of Hong Kong’s population to focus on its confused identity and the loss of some very specific communities. The two artists’ works are clearly separated in the space, and do not respond to each other; instead they follow their own visions and languages.

Kwan Sheung Chi has conceived his installations around the recurring concerns of his work, questioning the Hong Kong identity and the very status of contemporary art in a society led by materialism. A feeling of coldness and emptiness dominates the atmosphere. Every work stands like a provocative joke: Hong Kong flag pins piled up like rubbish, a useless TV surveillance system, a ridiculous globe and a mysterious triangular
space illuminated by a plastic totem.

The whole installation functions as a dead-end journey: three mirror-covered sliding doors open by surprise and lead to this white totem-chamber. The confusion triggered by the structure could reflect the haziness that still persists regarding Hong Kong identity and how to approach such a sensitive issue, with the three doors representing three visions of Hong Kong’s political future: integration with China, relative autonomy and independence. One sliding door is actually only accessible by walking on the thousand of Hong Kong flag pins, making the audience hesitate before crushing them. This buffer zone leads to a final room where a tiny paper globe is displayed. This globe, a work from 2012, is completely reductive and self-centred: it shows only the territory of Hong Kong, calling to mind old maps that only showed the known parts of the world. This treasure hunt thus turns out to be as short as the narrow vision it expresses – and mocks.
Mariana Hahn’s approach is more direct, even a little over-literal. She spent two months in Hong Kong searching for female former silk workers, and met one of the last remaining old boat-dwelling people who live off fishing. Her series is an illustration of these encounters, featuring a blue artificial pond for fishing, drawings on fabric and
omnipresent threads, as if to embody the weaving of lost stories.

Transparent silk dresses are hung up like ghosts. The shadow of a blue one seems to have been trapped, drawn further with charcoal on organza silk, while a yellow one hides an image of Aphrodite of Milos, better known as the Venus de Milo. Hahn plays with temporality, creating false mythologies or memories to blur the line between the past and an uncertain future. In a series of charcoal drawings on yellow paper, the artist represents primitive divinities whose faces are undefined or missing. A red thread runs through them, like a scar. In her titles (such as No it isn’t easy, but it is), Hahn repeatedly underlines her attempts to understand a confused reality, but it is difficult to share her concerns. Surprisingly, her illustrative works fail to provoke an emotional response.

Despite the excessive number of works displayed, one can’t help but be seized by a feeling of nothingness after the exhibition. The social fabric the artists are dealing with seems to be empty and abstract, denying as they do its lively multiplicity and the assumed connections between individuals. Perhaps a deeper collaboration between the artists would have been more fruitful.