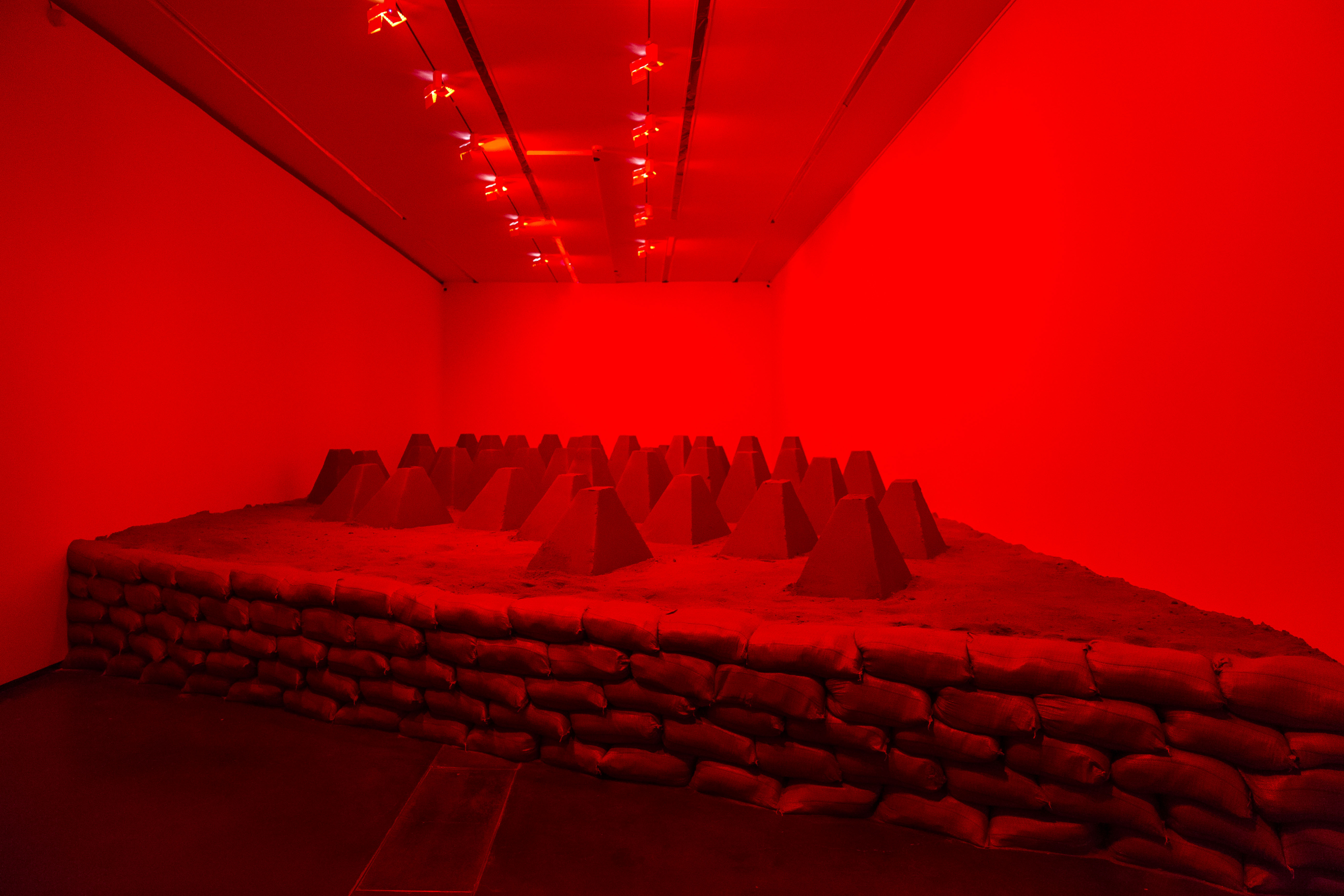 New Directions: Nadim Abbas, the artist’s first solo show in mainland China, at the Ullens Center for Contemporary Art in Beijing, consists of a single, new work, The Last Vehicle (2016). Curated by Guo Xi, it combines a mixed-media installation with a durational performance, the latter a first for the artist, who recently returned from a year exploring physical theatre in New York.

The name The Last Vehicle comes from Abbas’s reading of Paul Virilio’s essay of the same name.  The French philosopher’s main concern is how technology and the acceleration it causes have altered our perception and experience of the world.

“More specifically, the title The Last Vehicle, the way I would read it in relation to Virilio’s text, indicates this historical moment when the traversing of space or distances, to get from one point to the other, changes from actual vehicles to this even faster moment of telecommunications, and that way of overcoming distances,” says Abbas.

In The Last Vehicle, Abbas takes over the elongated Long Gallery of the UCCA and divides it into two physically separated spaces linked by CCTV monitors. The first room, termed the sandscape, takes up most of the gallery space and contains numerous mounds of sand packed down into trapezoids on a raised platform. The room is bathed in red light, giving it the aura of an alien landscape.

The second room is much smaller, bunker-like and divided into two parts. First comes an anteroom, entered through an automatic glass door, with a small sink in the far corner. Windows at eye level allow visitors to see into the main “control room”. This can only be reached through a heavy metal door and contains an observation desk with several monitors as well as equipment to survey the sandscape on the other side. There is a single gallery space, but it has been divided in a way that only allows people to connect the two spaces through technology. In the bunker room they receive only a second-hand experience, through the monitors displaying images of the alien landscape.

On closer observation the audience realises that these spaces are inhabited. The work involves two actors who never appear concurrently and whose performance has no set beginning or end.

One of them is an “alien” dressed in a tight white suit, whom the audience occasionally glimpses among the mounds of sand, moving coyly around on all fours. The possibility of seeing an alien either in the sandscape or as an image on a monitor in the control room creates alternate realities. Perceptions of what is real and what is imaginary are constantly challenged.

The second actor, the “pilot”, is found in the control room wearing a helmet and facing away from the audience. With his joysticks the pilot remotely controls “the vehicle” on the sandscape, a rover fitted with prosthetic eyes that transmits images back to the control room. Sitting in his carpeted room, complete with items to allow for a comfortable extended stay, the pilot never actually steps out of the control room and into the alien landscape to explore it in real time, relying solely on technology and mediated images to understand his or her reality.

“The work is a play on distinctions: distinctions between the real and the imaginary,” says Abbas. “And between the different frames of seeing things, so you look at the same landscape from all the various different angles and different temporalities at different moments in time, while at the same time experiencing that space physically in this visceral sense, through your movement through it.”

Abbas instructed the performers to be as inanimate as possible. “In a way I’m reversing the method I use when I work with objects. There is always the sense of trying to activate the object, to animate the inanimate. Whereas in this case, with the performances, it’s the opposite. I’m trying to de-animate a living being.” For example, the artist instructed the alien to be shy around the audience: to act “like an insect”. The pilot, on the other hand, “is literally rooted in his chair”, reinforcing the idea that people have become inanimate through over-reliance on technology.

The pilot also does not interact with the audience. The audience only enters the control room when the pilot isn’t in it; otherwise they observe the pilot from behind the windows in the anteroom. “Even though they look very different, in terms of costumes and aesthetically in many ways I think of the alien and the pilot as mirror images of each other, in the sense that both of them are conceived as living things that activate the space, that activate an inanimate environment,” says Abbas. “But all of the instructions in terms of the movement and how they interact with the space is geared toward trying to get them to reach a state of inanimate existence.”

In The Last Vehicle Abbas transports the audience into spaces that could come from a sci-fi novel or film: the convincing alien landscape complete with an alien hiding, the rover navigating the terrain and the bunker equipped with a multitude of gadgets to monitor the sandscape all mean that, as in our everyday lives, our understanding is mediated by technology. The artist suggests that in our haste, we forgo actual experience for speed or convenience, losing meaning and context.