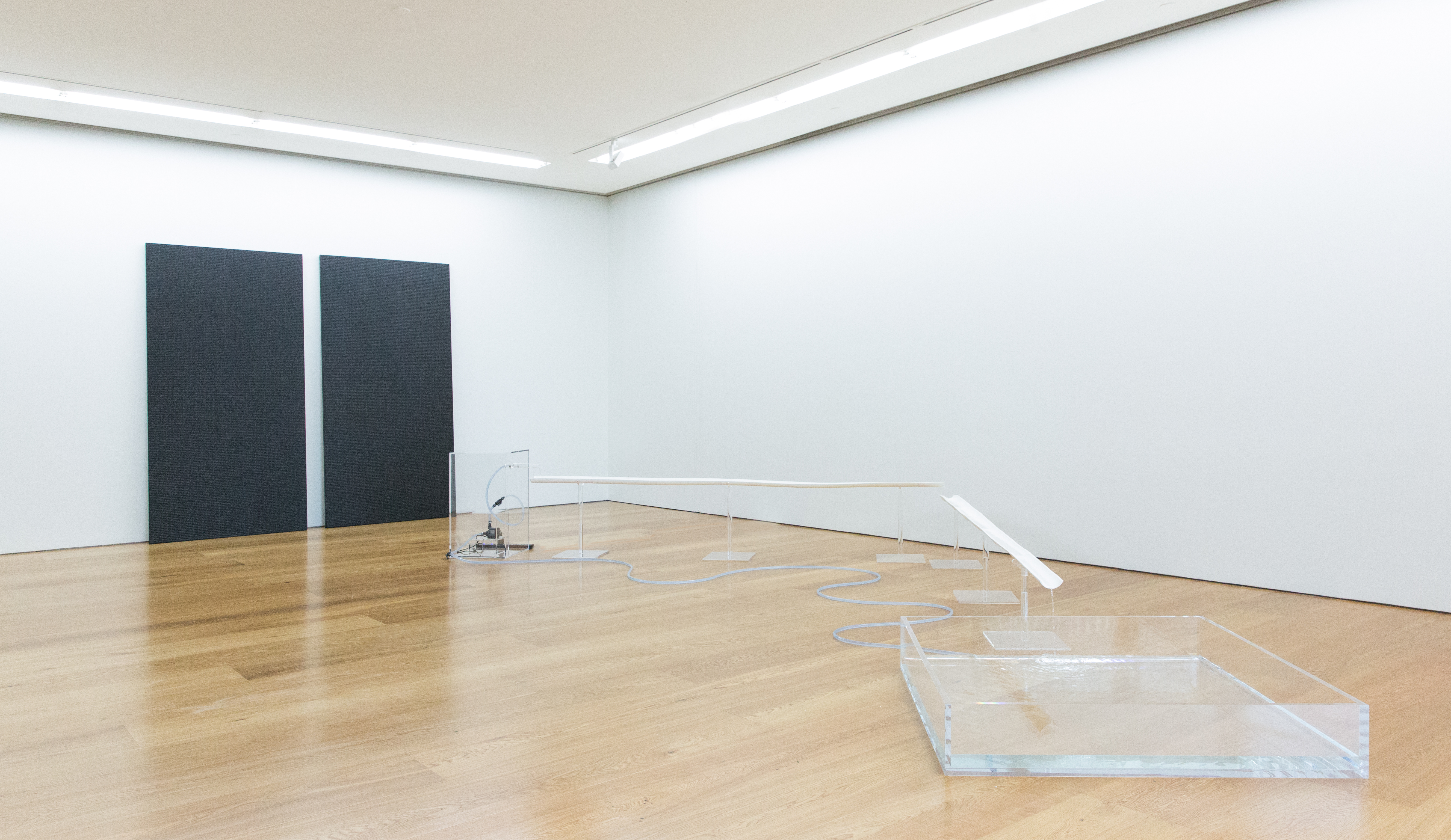 Philippine artist Maria Taniguchi estimates that she has painted a few hundred thousand bricks since 2008, when she started her ongoing series of untitled brick paintings. Shown alongside a fountain installation at Galerie Perrotin this winter in the artist’s first solo show in Hong Kong, these minimal, solemn paintings have become Taniguchi’s signature pieces, through which her practice – video, sculpture, pottery and installation – is often understood.

Large in format (on average 250 x 120cm) and repetitive in design, the paintings consist of small graphite rectangles carefully filled with black acrylic paint. The result might look mechanical but each brick has been painted individually in a laborious operation. The bricks, uneven in tone, with some darker than others depending on the ratio of paint to water, form abstract patterns that reflect the artist’s hand. Still, the series’ overall uniformity purposely belies Taniguchi’s labour-intensive, time-consuming efforts. This is perhaps a subdued comment on the undervaluation of manual labour in our post-industrial, globalised world, a topical subject in her homeland and across Southeast Asia. “All work is produced within multiple contexts and these all play out, regardless of whether they’re immediately visible,” says Taniguchi, leaving the door open for multiple interpretations. “My work is about making work,” she adds; the process cannot be separated from the outcome.

Taniguchi sees these works as parts of one single painting, and while this might be true conceptually, the way they are displayed at the exhibition suggests otherwise. The works are isolated from each other by large gaps and simply lean against the wall instead of hanging from it, so that the backs of the canvases are visible to the viewer and become part of the work. This presentation shatters the illusion of solidity that the bricks symbolise because it reveals what they truly are: paintings. No longer bricks but art works, the paintings are freed from their literal association with physicality. Monumental yet devoid of weight, they do not wall us out but rather draw us in.

Monochrome works on such a scale are soothing because they give us a space to feel rather than think – they allow for introspection – and Taniguchi’s brick paintings are no exception. Brick by brick, canvas by canvas, the viewer embarks on a meditative journey, the pace of which is dictated by the work’s regular, rhythmical structure. If there is a common trait between her brick paintings and the vernacular irrigation system also displayed in the Galerie Perrotin exhibition, it is this idea of perpetual movement, embodied by these tangible markers of the passing of time. Each black rectangle is like the tick of a metronome, and the incessant flow of water like unlimited sand in an hourglass. Far from a straightforward denunciation of our age of mechanical reproduction, however, the artist’s obsessive gestures are highly ritualistic. Her discipline and rigour are mirrored by the viewer’s act of looking. “Making work and encountering work are a kind of dialectic,” she says. The truth in her work is the process: of creating for the artist and of contemplating for the viewer.

These paintings, along with her lesser-known video and installation work, have earned the artist international recognition in recent years, including the Hugo Boss Asia Art Award in 2015. Her success has not gone unnoticed in Hong Kong, with several of her brick paintings presented by Berlin gallery Carlier | Gebauer at Art Basel Hong Kong last year and immediately acquired by institutions including M+ and K11, as well as the Burger Collection. She participated in Para Site’s much-acclaimed spring 2016 group show Afterwork alongside such household names in social and political art as Alfredo Jaar and Santiago Sierra. In addition to her Galerie Perrotin exhibition, she is one of five artists contributing to Heman Chong’s book Writing: Cabin Fever, for which she is writing a short story. She is also about to begin a residency at Things That Can Happen, where she hopes to investigate how her brick paintings relate to writing, language and codes.