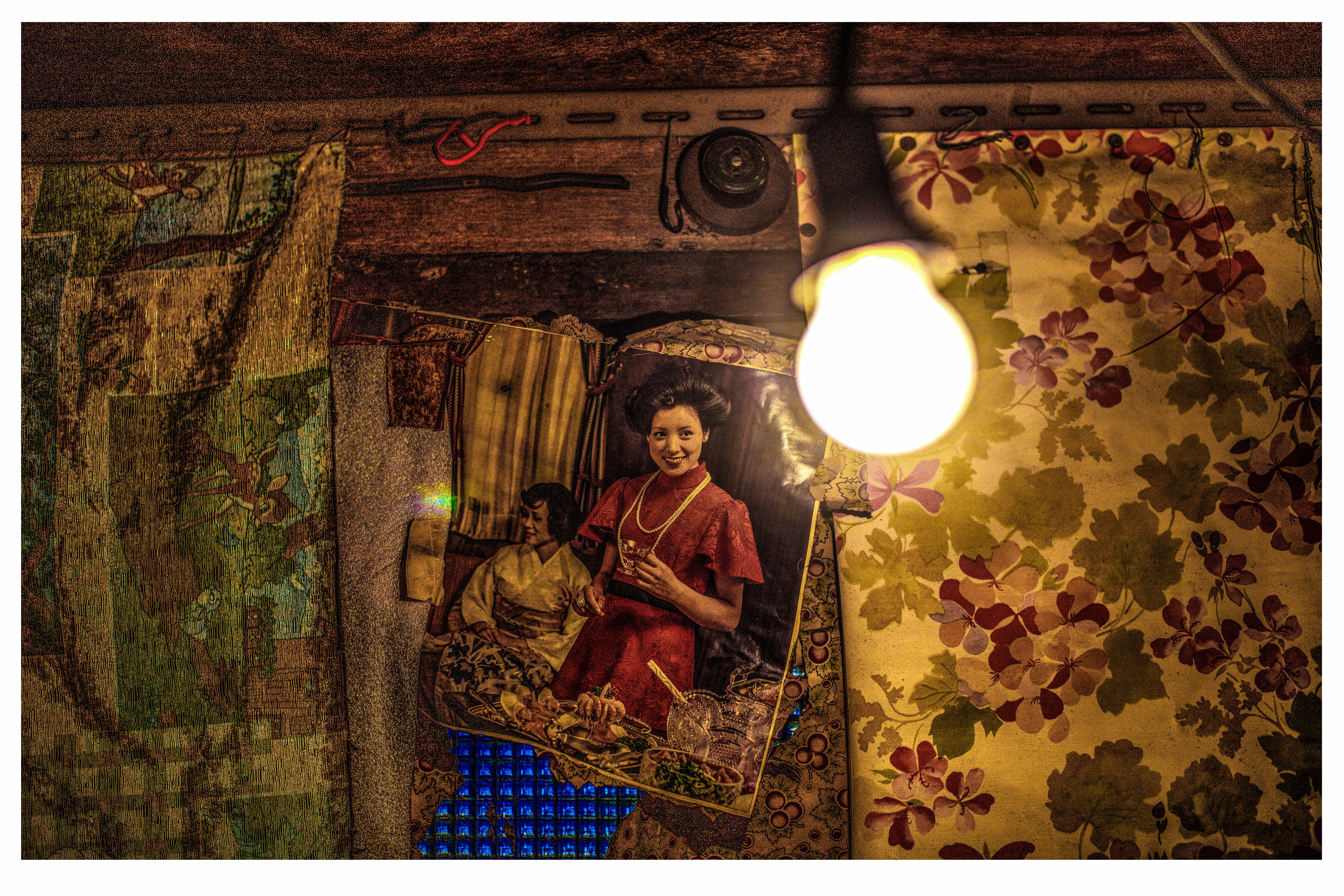 Photographer Ernest Chang and the Blue House share more than addresses along Stone Nullah Lane in Wanchai: they both overcame troubled pasts that could have cost them their existence. The former has emerged stronger and ever more tenacious after recovering from drug addiction, but the latter is still in the process of making a full recovery.

The story begins in the 1920s, when a four-storey tenement building, or tong lau, was erected at 72 Stone Nullah Lane, replacing what was once the district’s first hospital. Over the years it housed a martial-arts school run by a former pupil of kung fu master Wong Fei-hung, and then an osteopathy clinic, always with a few residential units on the upper floors. Accidentally painted royal blue during maintenance in the 1990s by workers who only had the Water Supplies Department’s blue paint to hand, the building was named accordingly. Today, though temporarily moved for the duration of the renovation, a charity shop and an exhibition space, House of Stories, occupy the ground floor, while eight families live upstairs.

Although it does not possess any particularly notable architectural characteristics, the Blue House is now listed as a Grade I historic building and is a symbol of Hong Kong’s traditional tong lau designs, merely for having survived the 1980s and 1990s, when the city’s foundations were wiped out to make space for the modern structures that shape today’s vertiginous skyline. Its colourful makeover perhaps also gave it the exposure necessary to stand out and become a notable landmark in the area.

Blue House #16. Rotationally symmetrical images, of roots of a plant growing on the walls of Blue House, layered on top of one another. Courtesy the artist and The Stallery.

As such, the Blue House, along with the yellow and orange neighbours with which it forms a cluster, were at the heart of a conservation project initiated in 2006 by the Development Bureau to safeguard and revive Hong Kong’s cultural heritage. A number of organisations submitted proposals for the project and charity St James’ Settlement was selected four years later for its overall vision, especially with regard to placing the local community at the programme’s core by fostering a sustainable regeneration model devised for and by the people.

The refurbishment of the house, led by architect Kenneth Tse, is scheduled to be completed by the end of the year, and will finally provide both commercial and residential tenants with basic facilities such as running water and private bathrooms. A vegetarian restaurant and a dessert bar are also planned for 2017, and will contribute to the fund that covers management and maintenance costs. The goal is for the building to become self-sufficient and to instil a sense of community back into the area, with St James’ Settlement choosing new tenants on that basis. Tenants will be expected to actively participate in
neighbourhood life by sharing skills and knowledge.

Blue House #23. Duplicated and flipped images of fluorescent tubes on the 6’ ceiling of a residential unit on 2/F. Courtesy the artist and The Stallery.

While the aim is to retain as many as possible of the house’s existing features, destruction and loss are inevitable given the structure’s very poor condition. Aware of this fate, Stone Nullah resident Chang used his lens to immortalise the interior of the Blue House before the scaffolding went up in March this year. The artist’s desire to preserve Hong Kong’s cultural heritage stems first and foremost from his upbringing. Born in Florida and raised in Hong Kong in the 1990s, Chang experienced the city’s transformation first hand, witnessing the demolition of many old buildings in favour of glass-and-steel skyscrapers. Having travelled to Europe often as a kid, he also developed an appreciation for historically rich architecture and learned that conserving the old while integrating the new was not only possible but also culturally valuable.

“I love it here,” says Chang over a drink at Stone Nullah hangout Tai Lung Fung; his passionate enthusiasm for the neighbourhood is contagious. “My flat, my studio and my watering hole are all within 50 metres of each other. But more

importantly it’s about the people here. They helped me through difficult times, so I wanted to find a way to give back.” After successfully battling drug addiction and leaving rehab, Chang found the stability and support he needed within the Stone Nullah community, allowing him to start afresh and remain clean.

Just as the environment proved right for the Blue House to thrive, so it did for Chang. For him, the greatest good can be achieved by starting locally, helping the people closest to him and letting any further positive effects happen organically. His relationship with St James’ Settlement and the Blue House dates to 2015 when through his studio and gallery The Stallery he sponsored Step Out Blue House, an annual workshop launched by the organisation to promote and stimulate conversation about the significance of tradition and heritage in Hong Kong. Raising funds through photographs of the house provided a way to continue supporting the Blue House’s development while also integrating his own artistic practice.

Blue House #13. Layers of retro floral wallpaper untidily ripped from a wooden partition. Courtesy the artist and The Stallery.

He visited the building twice with his camera, first as part of a public tour and second on his own. Both times Chang entered the house he was instantly drawn to the textures and motifs he discovered inside. The 30 photographs focus on details, or “the camera’s immediate view”, as Chang puts it, emphasising the claustrophobic dimensions and rough appearance of the spaces. “I wanted to recreate what the residents saw when they walked in or lay in bed looking at the wall.”

The photographs say little about the space itself but a great deal about its decrepit condition: dusty fans, torn wallpaper and old tiles populate the images as gritty testaments to years of neglect. Through the series we learn more about the building’s identity than we do about its occupants; the lives, habits and tastes of past tenants are only suggested.

“It’s a transient building,” says Chang. “People didn’t live there for a long time so no one really took the time to decorate or care for the place.” This is changing as the development project makes the Blue House a desirable place to live, aiming for an ideal fusion of past and present.

The saturated reds and greens throughout Chang’s work are not a stylistic choice but the result of his colour blindness, reflecting his personal experience of colour. The result is high contrasts and low reliefs, affording the images the quality of abstract patterns similar to those of the tiles and wallpaper they depict. Viewing most of the photographs is comparable to staring into the middle distance for a long time, so that the eye naturally starts to blur contours and flatten depth. One shot, however, stands out in both form and content: unlike the rest of the images, Blue House #11 (2016) is black and white, with a strong focus on the centre foreground, highlighting a padlock blocking a second-floor entrance. Except a light bulb shining on a Japanese ad from the 1940s pinned between floral curtains in Blue House #26 (2016), the padlock is the most recent accessory in the house. The depth of field on the left gives perspective to the image, opening up a three-dimensional space absent from the other photographs. Out of focus, what’s behind the door is uncertain, hinting at the endless possibilities of the soon-to-be remodelled room: the best is yet to come.

The series was jointly showcased for the first time at The Stallery and Stone Nullah Lane bar Tai Lung Fung on September 10 during a one-day block party organised to raise funds for the project. All profits from sales of the photographs this year will be used to meet costs related to the house’s upkeep. To Chang, it represents an opportunity for the city at large, beyond Stone Nullah, to engage with one of the most important regeneration initiatives the government has ever backed. The success of the undertaking will have the power to encourage and justify the creation of many more, in the hope that what remains of Hong Kong’s cultural history can still be saved and moved forward.