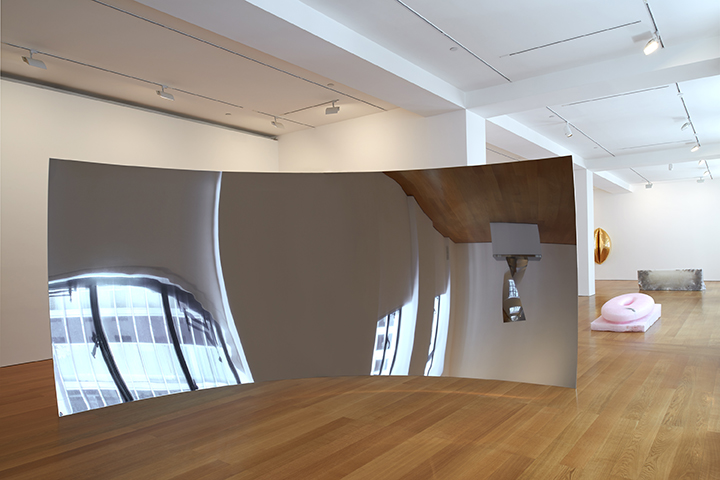 Anish Kapoor’s recent solo exhibition at the Gagosian, his first in Hong Kong, serves as both an introduction to his oeuvre and a subversion of it. The exhibition guides us through works from the past decade, starting with Kapoor’s iconic mirrored surfaces and moving into new, ongoing explorations of sculpture and sensory experiences.

Entering the gallery, Mirror (Black) (2014) hits the viewer with the sheer force of its materiality. In this first section, reflective surfaces highlight the interaction between subject and object, with Mirror’s dark, concave facade destabilising perspective. Similarly, Vertigo (2006), a large mirrored wave, dominates the gallery with its warped convex/concave structure, reflecting distorted images back at the viewer. More unassuming is Right Angle Triangle Twist (2016), a smaller work that takes the warped mirror of Vertigo and keeps twisting it, confronting the viewer’s sense of space and reality.

The exhibition’s second section illustrates a new direction in Kapoor’s art, with heavy slabs of stone lying on the floor. Compared to Kapoor’s immaculate mirrored surfaces, they are imperfect: corners are broken off, colours are uneven and edges are rough. The voids carved into them are contrastingly smooth and deep.

These works create a new sense of distance between subject and object. Gossamer (2015) and Stone Saddle (2016), two heavy blocks of stone with stretched wells carved into their centres, contain deep voids inside their rough facades; however, as they lie flat on the ground, we cannot gaze into and be enveloped by them. Instead, viewers interact with the pieces as objects rather than simply as sensory experiences. As such, their figurative qualities become clearer: they draw on an artistic tradition of vaginal imagery, featuring narratives beyond the ones between object and viewer.

This blurring of the boundaries between the figurative and the abstract is certainly not new for Kapoor, who has frequently used imagery from the female body to evoke emotional responses. The presence of figurative imagery nevertheless disrupts the sensory, interior experiences that we otherwise expect: a fascinating but occasionally frustrating interruption. Works such as Hysterical Sexual (2016) and Clip (2015) invite contemplation of their polished materiality; at the same time, their references to sex impede this contemplation. Their focus on surface is at odds with imagery that is intimate and loaded, and the juxtaposition ultimately leads nowhere.

Much of Kapoor’s previous work with voids explores the idea of the non-object, and with the reintroduction of the figurative object into his voids, Kapoor seems to simultaneously question the removal of the object and challenge the object’s very existence. He draws on this intriguing tension in Chamber 3 (2016), in which a void covered in gold leaf is carved into one side of the stone, its luminosity blurring perception of its depth. On the opposite side Kapoor has used pencil to scrawl an approximation of the void’s shape, forcing it into figurative, two-dimensional form and opposing its glossy perfection. The piece, in which both sides of Kapoor’s work co-exist and challenge each other – perfection and imperfection; the object and the void – epitomises this quietly captivating exhibition.