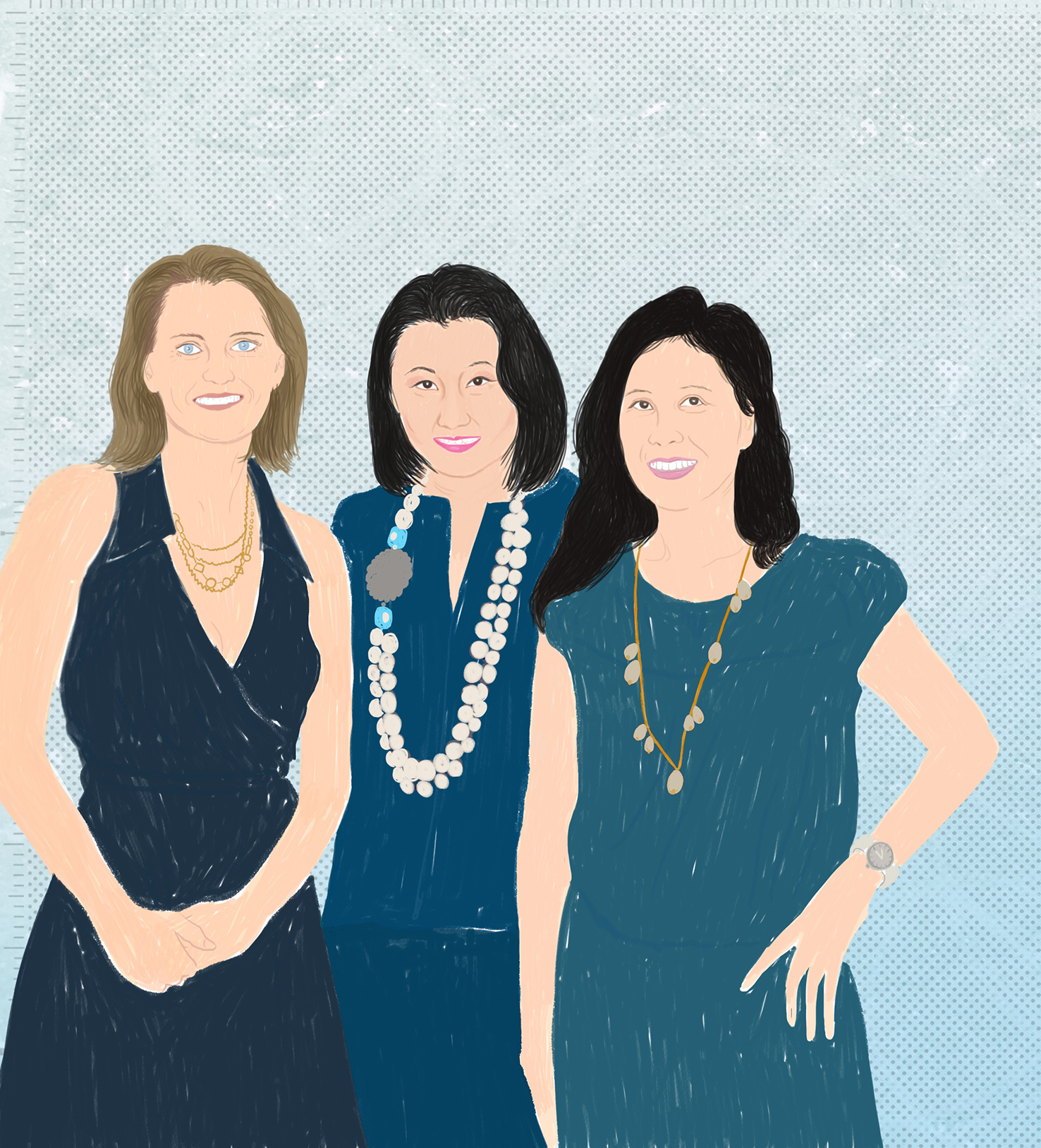 Meet the three women behind some of Hong Kong’s most ambitious large-scale public exhibitions.

On a recent December afternoon at the Ladies’ Recreation Club, three women gathered to discuss art. They were passionate, vocal and slightly stunned at the speed with which their lives have shifted. For Levina Li-Cadman, Sarah Pringle and Vita Wong-Kwok, art is not about recreation. This is a high-octane, professional partnership, reflected in the name they chose when they launched their company exactly a year ago: Art-Partners.

The core founder was Li-Cadman, whose background is in luxury-goods and media marketing. In 2003, when the Financial Times launched its Asia edition in Hong Kong, her job was to build its relationships with high-end clients. One of these was Christie’s, and she was subsequently asked to become the auction house’s Asia-Pacific director of business development.

After that, she began consulting for White Cube and for the Royal Academy of Arts in London. As Hong Kong’s second Art Basel fair approached in May 2014, the Peninsula hotel was keen to demonstrate its artistic sensibilities through an installation on its facade. The hotel asked Li-Cadman; she asked White Cube; the gallery asked Tracey Emin; she agreed to show one of her neon works, My Heart is with You Always.

“I was looking for a projection machine, and I knew Sarah was the art specialist with technical installation experience,” says Li-Cadman. Pringle, the only one of the three partners with a formal art education (Bath Academy of Art and Chelsea School of Art in the UK, and Cooper Union School of Art and Design in New York), has been an art consultant in the city since 2003, with particular expertise in public projects.

Li-Cadman and Pringle knew each other from the ceaseless round of openings that is Hong Kong’s art world, but this was their first collaboration. At about the same time, Pringle was involved in trying to bring Antony Gormley’s Event Horizon, consisting of 31 statues dotted at high and low levels around a cityscape, to Hong Kong. After a man jumped from a tall building in Central, however, main sponsor Hongkong Land pulled out.

Tim Marlow was then in charge of exhibitions at White Cube, which represented Gormley, suggested that Li-Cadman become involved. In November 2015, having being obliged to find new funding from scratch, Event Horizon finally arrived. There was initial public uncertainty: in the first fortnight the police received 29 reports of potential suicides, and the Highways Department briefly fenced off a statue in Central after a complaint about an “obstruction”.

“We love Hong Kong’s energy but it can sometimes be incredibly risk-averse and cautious,” says Pringle. “What was so wonderful was that Hong Kong people really enjoyed it. The predicted disasters didn’t happen.”

Event Horizon lived up to its name by widening perceptions of what public art could be. By then, Li-Cadman and Pringle had again collaborated with the Peninsula on British sculptor Richard Wilson’s technically demanding work Hang On A Minute Lads… I’ve Got a Great Idea, in which a coach balanced on one of the hotel’s parapets. The reaction to both high-risk art ventures exceeded expectations.

In January 2016, Li-Cadman contacted Wong-Kwok, whom she’d known for a decade. Wong-Kwok had joined Louis Vuitton in 2002 and in 2010 she’d established and managed its cultural projects across Asia. She’d liaised with local artists, arranged educational programmes and talks, where she encountered Marlow, and advised head office in Paris on acquisitions.

After she’d left Louis Vuitton in 2014, she’d set up her own art consultancy. “I’d got to know a lot of the artists,” she says. “I didn’t want to give up this fantastic relationship.” Li-Cadman and Pringle wanted her help on a project for Henderson Land’s H Queen’s in Central. Its hoardings presented an opportunity to brand it as an art building and showcase 10 Hong Kong artists during Art Basel.

The following year they conceived Voyages, 200 LED screens showing video art from galleries that were due to become the uncompleted building’s tenants. One of those works, courtesy of Pace in New York, was teamLab’s Gold Waves, an arrestingly beautiful display of aquatic movement that transfixed social media.

By then, they had founded Art-Partners. “People would ask me about something and I’d say, ‘You know what? You should meet Levina and Vita’. And we’d arrive with different name cards,” says Pringle, who came up with their collective name.

They worked on 16 projects during 2017’s Art Basel. “We see a lot of art; we travel round the world; we go to Art Basel, Documenta, Frieze, Venice,” says Pringle. When Swire wanted an entertaining, engaging piece for Pacific Place, for example, Art-Partners sourced Julius Popp’s Bit.Fall. The work, in which words from internet news sites are generated within a waterfall, was thought-provoking, mesmerising and freely
available to all – a perfect example of what they want to bring to the city.

Someone like Popp, who isn’t represented by a gallery, had to be persuaded to see Hong Kong as a worthwhile art destination. “Your pitch is as much to the artist as to your client,” says Pringle. “You have to describe the cultural landscape of this city, to explain that a shopping mall really is a public space; it’s not like a mall in Germany, where Popp is from.”

The trio are naturally attracted to the concept of the gallery without walls. To that end, they’re working with the Leisure and Cultural Services Department and the Hong Kong Arts Centre to create what’s being called the Harbour Arts Sculpture Park for March 2018. The idea, still being fine-tuned, is to show sculpture, by international and local artists, in the public space between Art Basel and Art Central. With luck and official blessing, the harbourfront park could last longer than the brief, intense flurry of those late-March fairs. It will be curated by Fumio Nanjo, director of Tokyo’s Mori Art Museum, and Marlow, now artistic director of London’s Royal Academy of Arts.