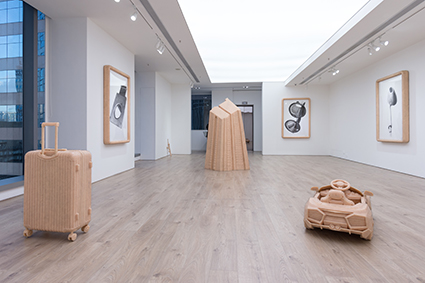 At first glance they can make you blush. The fleshy, carnal texture of Wang Du’s works at Tang Contemporary is at once erotic and almost repulsive, like seeing the back of a stranger’s thighs up close. For his exhibition Post-Fetishism, the Chinese artist presents five recent charcoal drawings surrounded by pale silica frames implanted with thousands of individual synthetic hairs. The large-scale pictures are close-up views of contemporary fetishised objects: Apple headphones, stylish sunglasses, a cork from a 2004 French wine, a cigar cutter depicted in such large scale that it resembles a guillotine. On the floor are models of a child-size car, a Rimowa suitcase, a wonky skyscraper and an AK-47 made of a peach-coloured gel that gallerist Shasha Tittmann described as “similar to that of breast implants”, each as whiskered as the picture frames on the wall. They look as if they would wobble and shake if pushed. The works are numbered rather than named to draw attention away from the objects’ original functions.

Born in 1956 in Wuhan, Wang began his artistic career aged 16, copying Cultural Revolution propaganda for the government. After founding the group Southern with other intellectuals and artists, and later being imprisoned for speaking out against corruption, he moved to Paris, where he has lived and worked since. His interest in fetish objects follows from his concerns about media and technology’s effect on society; The Space-Time Tunnel, shown at both Palais de Tokyo and UCCA in Beijing, consisted of a tunnel of crumpled newspapers and magazines, with 66 screens broadcasting global television programmes inside.

Wang is also known for sculptures of human bodies that exaggerate or warp gender – with grotesquely enlarged breasts, for instance, or hyper-masculinised musculature. His works at Tang Contemporary are a wry comment on commodity fetishism and the abstract value embedded in the objects; the guns, cars and technology are signifiers of supposed power and luxury. By adorning the material goods lusted after by consumers with flesh, as if they were human, Wang levels the playing field of desire, realigning man and the man-made, and pointing to the absurdity of our hope that objects could love us back.