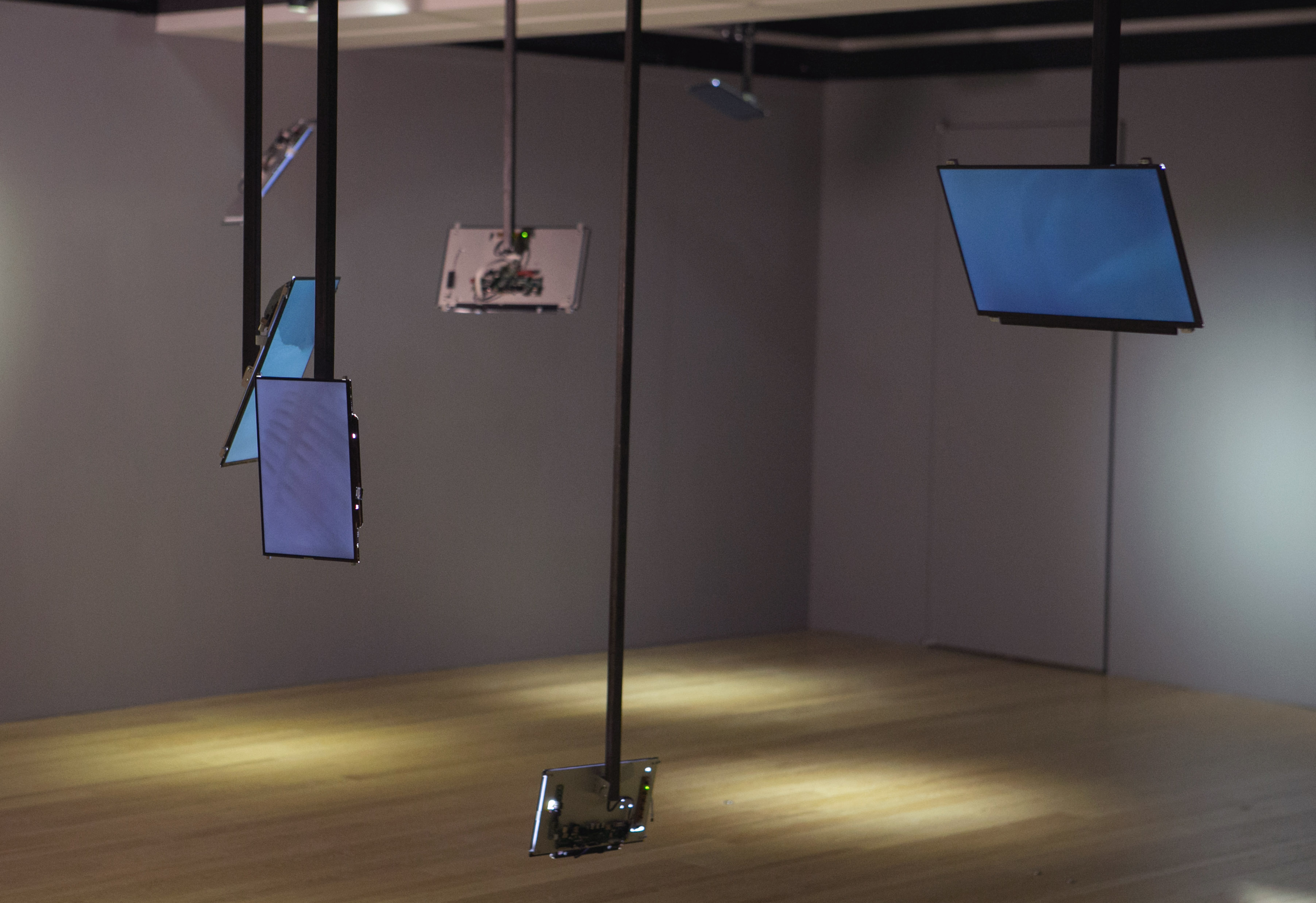 At X+Y, a dual solo exhibition of local artists Tung Wing Hong and Phoebe Hui that ran until October 30, two large-scale, mechanically intricate installations transform the chi art space into an immersive funhouse, with slowly rotating plasma screens hanging in mid-air and a pair of inviting, adult-size swings. Swinging on the latter trigger ripples in a pool of water that at first seem disembodied, and musical notes in the sequence of a well-known Tchaikovsky waltz.

The show, part of the As Far As Near exhibition series presented by the K11 Art Foundation, displays Tung’s In Between (2016) and Hui’s Process with body, water & amp; pendulums (2009-2011, 2016) in a fluid continuum. Because of the sheer scale and mechanical complexity of Process, Hui had not had a chance to show it in Hong Kong before.

In the intimate gallery, the placement of the two works without partitions highlights the artists’ common impulse of drawing on mechanics and technology to allow viewers to reconstruct self-awareness and spatial awareness. With their sentimental movements of slow tracking shots, gentle rotations and mellow ripples, the two works – a video installation with hanging screens looping abstract montages, and a swinging structure inspired by the harmonograph, a historical drawing tool – introduce a new, nuanced perspective on the mechanical, alongside its usual connotations of hard science and muscular motion.

Despite their thematic coherence as mechanical installations punctuated by a distinct technological edge, the two installations diverge in what curator Jeff Leung Chin Fung calls their “static and dynamic” strategies of inducing quiet introspection and full participation, even collaboration, to draw viewers into their immersive spaces.

The self-generated rotating motion of Tung’s installation is slow, subtle and silent, belying the work’s mechanical complexity as viewers navigate it. In contrast, the swinging motion in Hui’s work draws entirely on the dynamic participation of the audience. As viewers swing in and out of phase with each other on the two perpendicular swings, performing or dancing the programmed waltz, the resulting melodies are at times harmonious and in tempo, at times discordant and lacking rhythm, and mostly somewhere in between, giving rise to an unexpected physical and aural sensation that challenges assumptions about how kinetic gestures create music.

The two works’ divergent but equally unpredictable element of audience participation brings an important variable to the equation that Leung formulated in the show’s title, X+Y, which could symbolise anything from male and female chromosomes to algebraic unknowns. “How patient can viewers be when navigating Tung’s screens and abstract montages?” says Leung. “Can they swing strategically to resonate with each other or recreate the waltz in Hui’s work? These are the unknowns I’m excited about.”

Navigating Tung’s hanging constellation of slowly rotating screens, viewers glimpse looped footage of monotonous textural expanses, constantly adjusting to different heights and angles as they are forced to crane their necks, bend down or remain at eye level. As each screen rotates away of its own accord, viewers are also prompted to chase the elusive images by rotating along, while trying to avoid collisions with other screens. This physical sensation of being surrounded by screens in every direction is familiar, but the visual experience is simultaneously surreal and alienating, because viewers feel compelled to make an effort to follow the images: the repetitive montages do not only elude them physically but are also devoid of representational meaning, leading to what Tung calls a “perceptive uncertainty that allows for a moment of self-reflection”.

This self-reflection arises as viewers search for concrete meaning on the screens around them – screens like the ones they scroll through every day – only to find a blank instead of the usual deluge of images and words. By forcing viewers to gain a conscious awareness of their viewing and perception, for example by making them go onto tiptoe just to see a monochrome tracking shot, “the alienating, abstract landscapes act as a sort of mirror, reflecting their selves”, says Tung. The act of taking in information through subconscious viewing, second nature in an environment saturated with moving images, turns self-reflexive and conscious as viewers reconstitute their physical and psychological relationship with screens and re-examine the often narrow perspectives they channel.

While Tung’s installation makes viewers chase after elusive images to break out of their habitual mode of interacting with screens, Hui’s installation prompts them to relate to space in a novel way on two other levels. The first is through their participation, as viewers use their kinetic motion to swing back, forth, left and right, and pull a pool of water in two directions. This motion creates ripple effects that are in turn projected on the wall in white light. Like its inspiration the harmonograph. a 19th-century machine that uses two perpendicular pendulums attached to pen and paper to draw mathematically generated patterns, the mechanical component of the installation triggers a direct visual outcome that depends on the relative forces of the directional swinging motions.

Since the two swings are electronically wired to a computer programmed with the treble and bass lines of a familiar melody, swinging also churns out sequential musical notes at different rhythms and in different keys. Random swinging produces a discordant jumble of treble and bass notes with no discernible rhythm, but the motion can be synchronised to produce a melody that resembles the original piece, a Tchaikovsky waltz popularised by Disney’s Sleeping Beauty. The tune’s inherent order is latent in the installation, but what viewers do with the mechanical structure controls whether it is realised correctly in rhythm and key, or whether something new is created. By connecting diverse systems, Hui links motion, sight and sound to offer a new way of thinking about mechanical, sensory and even causal relationships between space and other elements of the external environment.

The performance dimension of Hui’s installation, inspired by Steve Reich’s process music composition technique, leaves the tempo, rhythm and key of the pre-programmed melody to chance in the form of viewer participation. This tension, between the inherent melody and latent harmony on the one hand, and the random, audience-dependent realisation of these on the other, results in a melange of harmonies and discordance that is, in a different way from Tung’s work, also simultaneously familiar in substance but alienating in reality.

By using different strategies to render elements of mechanics and technology – so often associated with physical immutability – introspective and unpredictable, the works allow viewers to gain a conscious awareness of their habitual modes of relating to objects, sight and sound, and in the process to appreciate that a sense of the unknown can be found amid the familiar.