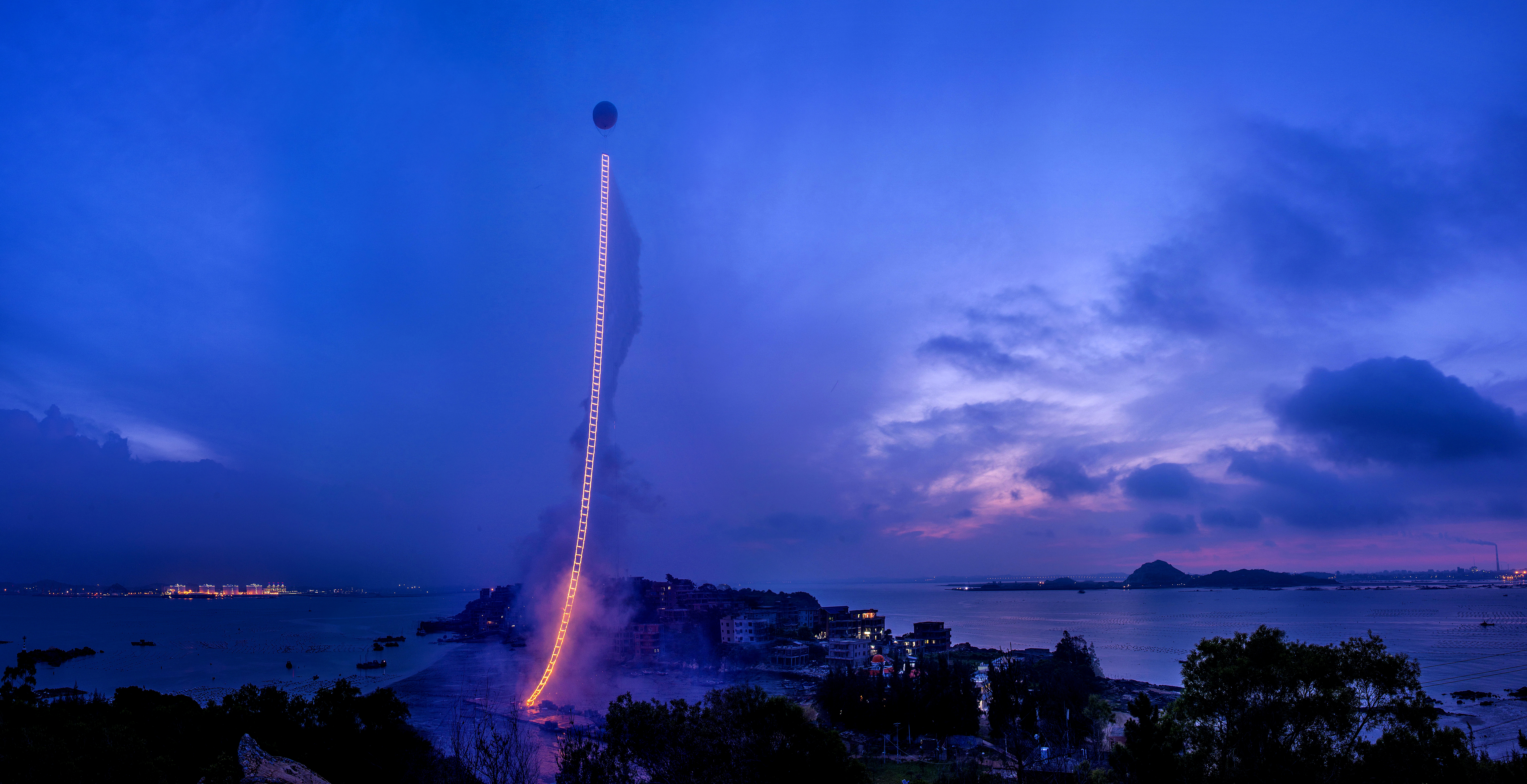 Connecting the Earth to the rest of the universe was Cai Guo Qiang’s childhood dream. When he finally realised it in 2015 after 20 years and three failed attempts, a majestic 500-metre ladder of gold light ascended into the night sky over the Huiyu Island harbour, not far from Cai’s hometown in Fujian province. A touching gift to his ailing 100-year-old grandmother, who watched the spectacle unfold on FaceTime, Sky Ladder is a striking metaphor for Cai’s artistic ambitions.

The eponymous documentary, directed by Kevin Macdonald and produced by Wendi Murdoch, offers a captivating look into Cai’s life and work, heavily premised on the shock of the Cultural Revolution, which Cai experienced as a little boy, and his move to Japan and later New York. Narrated by the artist himself, his close friends and family, as well as prominent scholars of Chinese culture such as Orville Schell and Ian Buruma, the documentary evolves chronologically, taking us through the artist’s career from his formative years to his rise to international fame.

Cai began to explore gunpowder as a creative medium as part of a mission to set his art free from the confines of traditional painting. He found it in the transcendental, the physical manifestation of his fascination for the “unseen power of the world”, in monumental works such as Project to Extend the Great Wall of China by 10,000 Meters: Project for Extraterrestrials No. 10 (1993), where a 10km-long firework path stretched from the western tip of the Great Wall to the edge of the Gobi Desert, and the poetic opening for his show The Ninth Wave (2014) at the Power Station of Art in Shanghai. In Elegy dark grey, blue and green smoke curls in the air, transforming into a tumultuous ocean, a perfect illustration of a ninth wave, the final and most dangerous in a tsunami.

Beyond the magic of his work, it is Cai’s complicated relationships with his family on the one hand and his country on the other that gives this documentary its emotional power. Now very ill, his father, a former artist and bookshop manager, was an inspiration to Cai, who shared his love of art and literature. With the coming of the revolution, however, the family was forced to burn his father’s treasured books, an episode Cai recounts with tears in his eyes. The brutality of the revolution left the artist ambivalent about his native country, and there is a tension between patriotic pride and political dissatisfaction throughout the film.

This inner conflict reaches its climax as the documentary itself adopts a critical perspective on the Chinese government’s attitude towards art. As we follow the development of Cai’s major public works, including the opening ceremonies for the 2008 Beijing Olympics and the Asia-Pacific Economic
Cooperation conference in 2014, it becomes clear that his artistic vision was gradually discarded by the officials overseeing the projects; the resulting shows were far from the artist’s original intentions and lacked the sublime quality that makes Cai’s work so appealing. The issue, of course, of maintaining artistic integrity in the face of commercial success, is not confined to China.

Artistic brilliance is revealed when artists are free, as the final scenes of the documentary show, with Cai’s magnum opus coming to life. These few minutes alone justify the whole documentary. The artist’s joy, coupled with the sheer beauty of Sky Ladder, are the perfect end to an already inspiring film, one which successfully captures jaw-dropping, ephemeral works that most of us would have otherwise never had the chance to see.