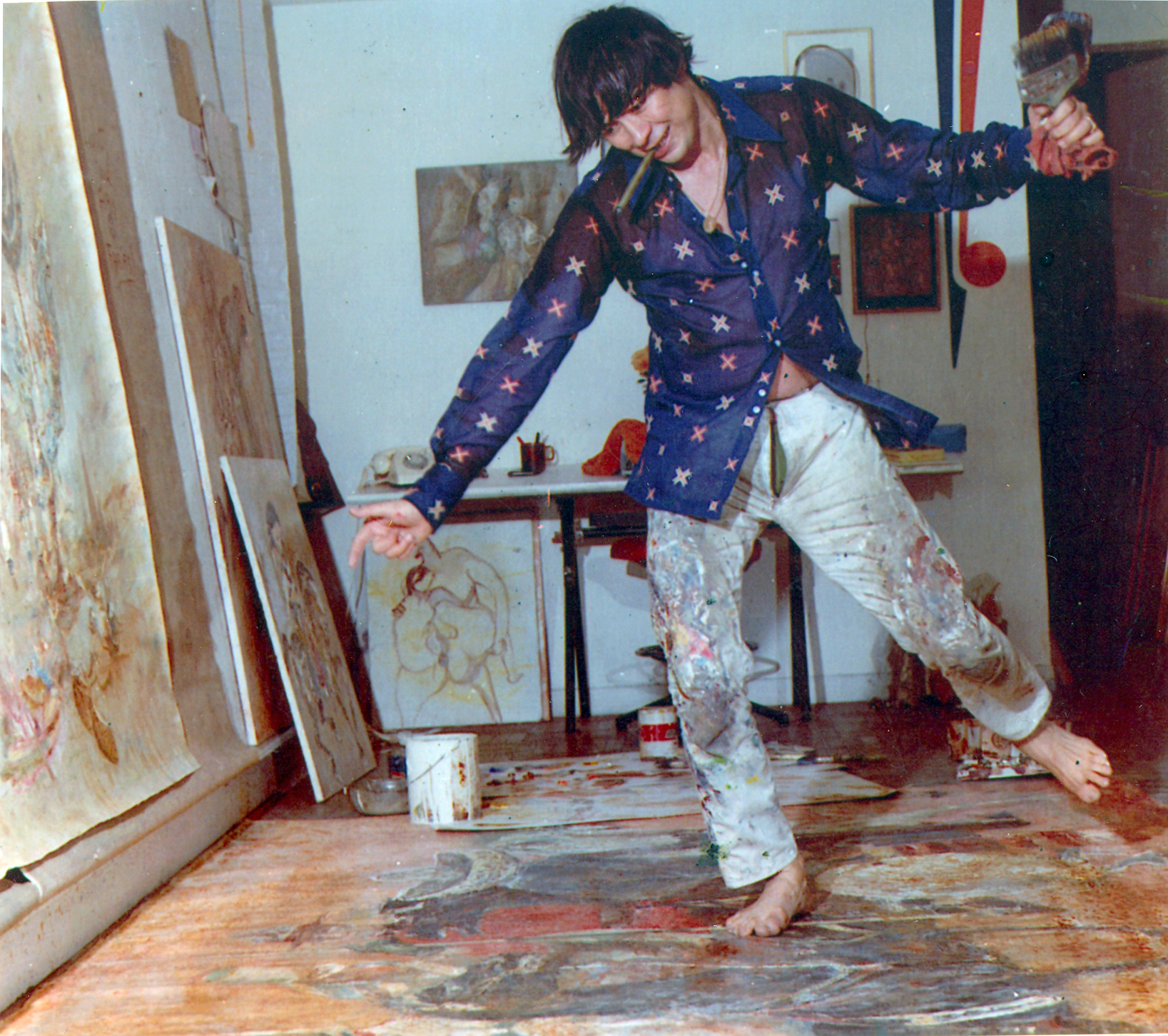 By Alexandra A Seno

In the autumn of 1963, a new luxury hotel opened in the heart of Hong Kong’s Central district. The 27-floor Mandarin Oriental boasted state-of-the-art amenities such as the city’s first phone system that allowed guests to make direct calls to outside numbers, and switchboard operators to activate an in-room light informing occupants of missed calls.

Befitting such a cosmopolitan operation, the hotel’s owners chose an artist based in Spain to create the property’s most prominent features. A rising star with a growing international following, he was of European and Chinese descent, and seemed to have just the right style for the large, dramatic murals in the lobby and the Mandarin Grill restaurant, as well as mosaics for the rooftop swimming pool area. This is how most of Hong Kong was first introduced to Gerard d’Alton Henderson.

Menage a Quatre, Crayon on vinyl on board, 55 x 76 cm, 1987. Collection of Elizabeth and Anthony Golamco.

In the final two decades of British rule, Henderson — who was born in Malaysia and grew up in Singapore — was the artist to know in the Crown Colony. The best households had to have his paintings: contemporary reinterpretations of Tang Dynasty figures rendered in impasto, or fleshy horses outlined with the burned end of one of the cigars he always seemed to be brandishing. (Sometimes he would dunk his cigar in coffee and sketch as one might with a crayon, as he did on a television appearance.)

Some examples of Henderson’s oeuvre are on show at Ping Pong, the Sai Ying Pun gin bar. Sourced from local private collections, the exhibition provides a glimpse of Henderson as a phenomenon of his time, and a reminder of changing fashions in trend-conscious Hong Kong.

In the 1970s Henderson left Europe to make Hong Kong his home. His movie-star good looks and his effortless wit made him a regular in the society pages. In 1980 a local magazine named him one of the “Ten Most Fascinating Men in Hong Kong”, alongside tycoons Stanley Ho and Li Ka Shing. Between a life of epic adventures from Afghanistan to Argentina, Henderson produced murals that quickly became familiar to many a sophisticated globetrotter. His work hung prominently at the Savoy Hotel in London, the Phoenicia Intercontinental Hotel in Beirut, the Pan Am Building in New York, the Peace Hotel in Beijing and on the facade of the Hilton in Singapore, among others.

When high-flying Australian property mogul Alan Bond built shiny twin skyscrapers in the middle of Hong Kong’s most prestigious commercial neighbourhood in 1987, Henderson was commissioned to create the complex’s murals, rumoured to cost hundreds of thousands of US dollars, the equivalent of millions today. Henderson’s ceramic-and-rock murals celebrating his favourite east-meets-west theme still dominate the lobbies of what is now known as the Lippo Centre.

“Painting to me is an emotional high, my ultimate climax. I approach painting the same way one makes love, with nothing held back, a total embrace,” Henderson once said. The quote, typical of the artist, appears at the start of the catalogue for the exhibition, which marks the 20th anniversary of the last big Henderson show in Hong Kong, held in 1997 at the Mandarin to commemorate Hong Kong’s handover to China.

Some of Henderson’s most memorable works feature horses. In her essay for the Ping Pong catalogue,

notes Henderson’s equine fetish: “He liked to say their rumps reminded him of women’s behinds: ‘Nice voluptuous bottoms.’” One of the most striking pieces is an oil-on-canvas work from the 1970s; more than two metres long, it depicts a group of men on horseback, banners in the wind and galloping, as if in China’s distant past, across a dusty, unidentified landscape rendered in broad ochre and blue-grey strokes.

He was also fond of creating paintings of Buddhist deities, of the type found in cave temples along the Silk Road, one of his favourite destinations. Though his work was on canvas, his love for impasto techniques resulted in an almost 3D effect, layers of paint giving shape to his figures. One such piece portrays Guanyin, the goddess of mercy, diaphanous robes appearing to billow at her feet, rising from a misty, mustard-hued background.

The rooftop pool and its murals (now the fitness centre), Mandarin Hotel, 1963.

By the late 1990s Henderson had become so successful that he lived and worked on The Peak, his studio occupying a luxury flat adjacent to his home. His paintings continued to be in high demand among the city’s aficionados of western-style art, then an even smaller group than today. Like many in his social circle, however, Henderson left Hong Kong after 1997.

Tastes changed in the city. New, younger collectors wanted art that resonated with their generation, and now the colonial years and the likes of Henderson seem like a distant memory. Initially Henderson returned to Spain, where his two grown children lived. In 2005 he moved to a sprawling estate in the rural Philippines, to spend his last years with his partner Paula Perrine, whose family controlled Del Monte plantations and operations in the country. He passed away in 2014. Now and then Henderson’s work still appears at auctions, smaller paintings going under the hammer for just hundreds of US dollars.