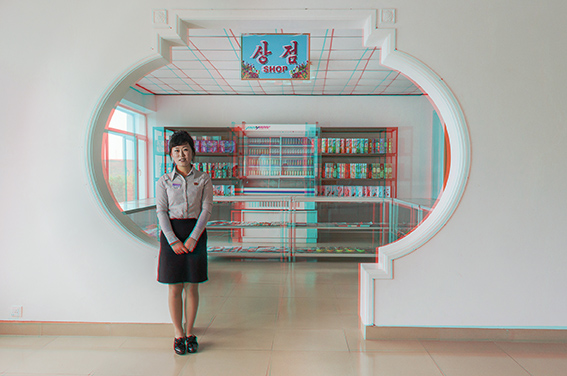 Apparently some North Korean officials harbour a fondness for 3D photography. That, at least, is the explanation given for Slovenian photographer Matjaž Tančič gaining access to the notoriously secretive, restrictive country in 2014 to take stereoscopic photographs of its citizens — images that were recently displayed in the exhibition 3DPRK at Pékin Fine Arts in Wong Chuk Hang. Tančič obtained permission through a contact to take photographs for a temporary exhibition in Pyongyang, which later travelled to Pékin Fine Arts in Beijing and then to Hong Kong.

The photographs, which include images of waitresses, shop clerks, factory workers, athletes, nurses and farmers, were shown in the gallery alongside a video documenting Tančič’s 10-day trip. He was accompanied by two local guides as he documented ordinary people in restaurants, hospitals, laboratories, factories and “children’s palaces” – community centres for extracurricular activities. Adhering to a strict, breakneck schedule punctuated with requisite museum visits, Tančič managed to capture some captivating, albeit highly structured and posed portraits, while his assistants discreetly recorded video footage of the process. By gradually gaining the trust of his chaperones, Tančič pushed boundaries, venturing beyond frequently visited locations and photographing soldiers, something that was previously forbidden. The three-dimensionality of the pictures gives viewers an empathetic relationship with the subjects, allowing them to walk around figures with whom contact is otherwise rare, shifting the act of looking from passive to active.

But it is impossible to ignore that the farms, schools, factories and hospitals Tančič was permitted to photograph are likely the best the reclusive country had to offer. The video describes how many aspects of the country looked like a film set or showcase constructed to convey a sense of stability to foreigners — one that human-rights reports and the accounts of defectors strongly contradict.

Yet Tančič is adamant that his undertaking was a politically neutral one: he insists his primary interest lay in depicting people as they naturally were. In execution, this is fair: he treats his subjects with dignity and as normal people, temporarily independent from the regime. But undertones of the government are omnipresent in the images’ careful framing.

It raises the question of where art ends and propaganda begins. A foreign photographer in North Korea faces the same difficult question encountered by tourists there, of whether they are affirming the regime either economically or by turning a blind eye to its realities – plus the further question of whether it is ever appropriate to depict North Korea without addressing its forced incarceration, starvation, abuse and concentration camps. Tančič’s ability to voice his true thoughts runs up against the fact that he has been granted an intimate privilege by a government which is likely to keep an eye on him. As an audience member pointed out after Tančič delivered a talk at the Foreign Correspondents’ Club in Hong Kong, it’s likely that North Korean officials knew he was holding that very event.