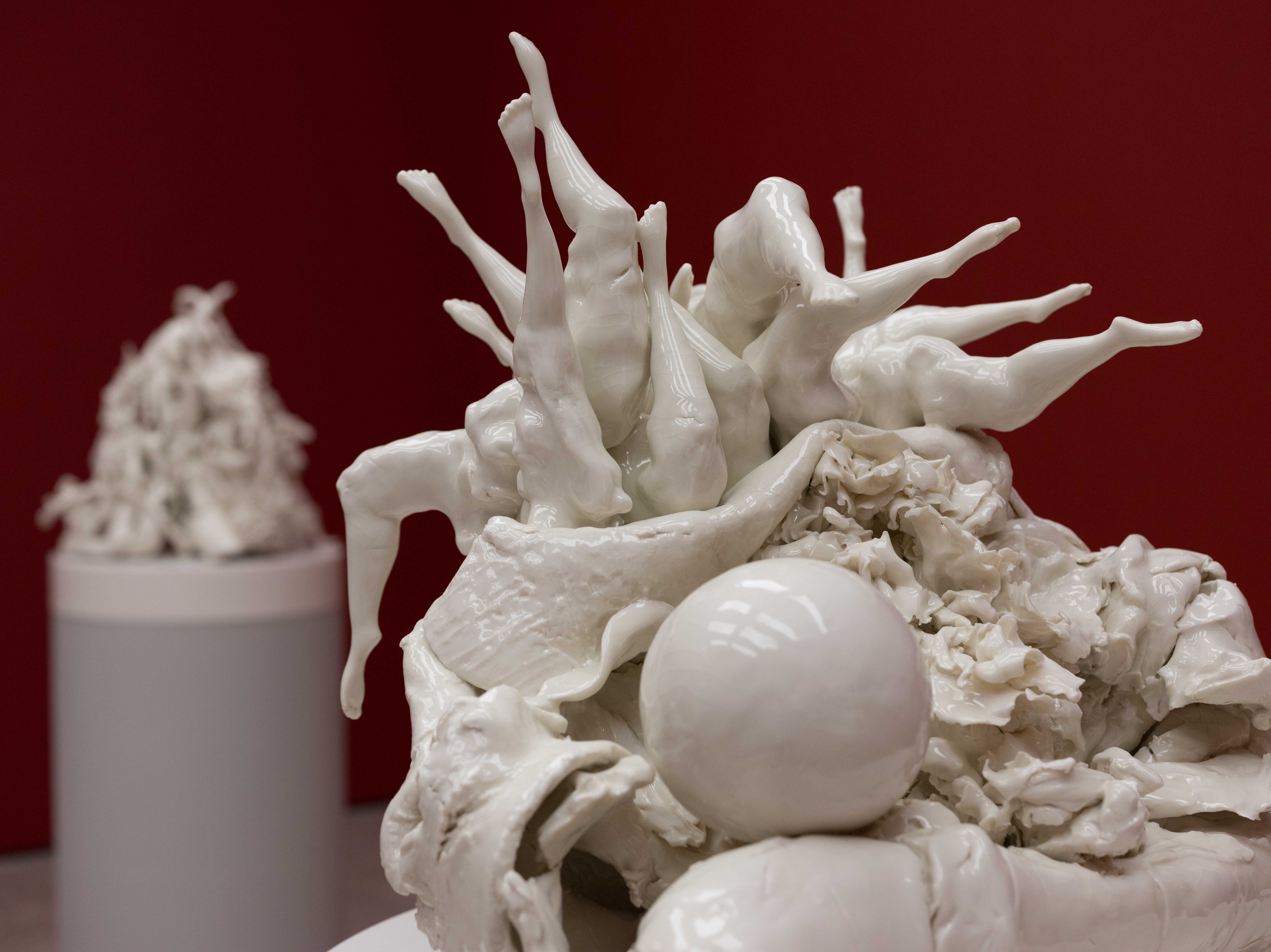 British sculptor Rachel Kneebone forges the human condition out of clay. The great meta-narratives of humanity – creation and destruction, life and death, renewal, love, suffering, heaven and hell, the limitations and possibilities of the human body – are all tackled in her sculptures. It is a biblical, monumental endeavour.

The pieces, however, look incomplete, like the creator of all these bodies got interrupted, or thought better of completing her homunculus playthings. There are no whole bodies in Kneebone’s works. On closer inspection, instead there is a headless, disembodied tangle of limbs and genitals, thrown together in a topographical landscape of mounds and spirals.

“My work will always be unfinished in terms of a definitive reading or meaning,” Kneebone says. “It is the gaze of the viewer, and that particular person’s relationship to that sculpture, that finishes the work.” This unfinished quality lends the work an ambiguity, as if the figures are flitting between a state of multiplying and merging, decay and renewal.

Kneebone works with transformation and metamorphosis, beginnings and endings. Metamorphosis, an ongoing theme in her work, is explored in her current exhibition Ovid in Exile at White Cube Hong Kong. The artist drew on Ovid’s Metamorphosis, which she read and listened to while making the works, as part of her enquiry into the human condition. “Each work embodies forces acting in multiple directions at once, in constant flux”, she says. “Fluidity is the best means of articulating this active state in which the work, aesthetically and conceptually, is simultaneously forming and breaking.” There is a literary but also a literal metamorphosis happening to the material and forms, from a block of clay to the firing process to the final hardened, glazed towers of figures and forms. Under heat cracks, fragmentation and shrinkage occur. The final outcome cannot always be controlled, and the porcelain can fracture in the kiln. Rather than see the fissures and cracks as faults to be discarded, they become as much a feature of Kneebone’s work as the figures themselves.

“To be alive, to be human, involves moments of breakdown, of chaos and of feeling lost and uncertain; there are gaps in our knowing, ruptures and change in life,” she says. “These are inscribed upon the body of the work. I feel this is what is beautiful about my work, about anything. To me it shows how vulnerability is also strength, how we can be broken but still be strong, still remain and keep going.”

Porcelain allows the works to be at once delicate and strong. There is a tension between form and fracture as the shapes distort and crack, and bodies perch atop one another precariously as if the whole tower could collapse in on istelf at any minute. Alongside her porcelain sculpture works the artist will also be presenting a series of drawings which, she says, “share a site of origin and exchange through form with the sculptures: the cutting, slicing off, rubbing out or erasing of form and the adding, building and overlapping to make form – merging form upon form to create and build another.”

Despite the literary references that often inform Kneebone’s works, it is the language of the body on which Kneebone draws to create the thought-free space required as the starting point for her work. She works from a place beyond reason or words; thought, as French philosopher Jacques Lacan stated, “is an enterprise of enslavement”. The creative process is guided by intuition, led by movement. It is a physically demanding struggle. The movement of the artist’s hands into the clay becomes a part of the clay’s body, embedded in it as direct physical energy is required to push the work forward and turn the formless into form. “Porcelain absorbs whatever I put in; it is responsive to the lightest of touches as well as an intense strike of hand to material. Porcelain is not passive,” says Kneebone. While its initial form is a lumpen mass, “it’s inherent with possibility. Porcelain is wilful: it has a resistance to handling, a definiteness.”

The works are explosive, full of movement, ushering forth a stream of thoughts, verses, words and feelings.  Repetition of movement, like a familiar choreography, is required to make the work, shaping the clay into figures and architectural towers. “My movement sets up a form that is ultimately completed in the material’s response to firing,” she says.

The material itself, is key to accessing this sense of movement and fluidity in her work. The clear glaze on the white porcelain bodies allows light to slide over them, creating a lustrous surface, like glistening water. “This fluidity is what prevents the eye, or one’s attribution of meaning to the work, ever getting stuck in one place,” she says. “Instead it’s like an ice rink on which there is a dance of thought and counter-thought, response and association.”

Life is movement. Kneebone’s masses of delicate, diminutive human figures encapsulate what it feels like to be alive, to strive and strain to one’s limits, to be caught up, entangled and held back. They convey what it means to suffer, to be imprisoned by one’s body, to feel pain. But, as much as the human body can be hell, it is also carnal and joyous to touch, hold, squeeze and love. Kneebone lyrically expresses through clay what an epic poem would take pages to say.