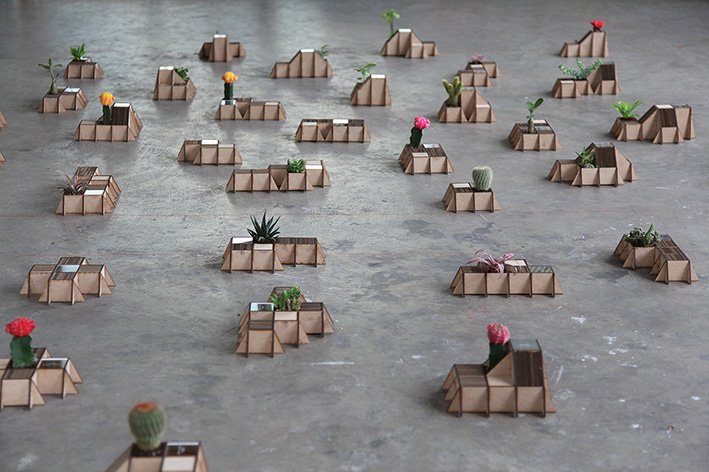 For more than 20 years, Valérie Portefaix and Laurent Gutierrez, known together as Map Office, have been working in the field of art and architecture with a rhizomatic approach, exploring both the reality and the mythology of territories. They represented Hong Kong at the Venice Biennale in 2007 and and won the Sovereign Asian Art Prize in 2013.

Caroline Ha Thuc: For this Venice Biennial, you are presenting an exhibition, seminar and book launch about the deep sea, working with both artists and others whose work involves the ocean, who write about their relationship with it. What triggered this idea? Map Office: Our project in Venice has to be seen as a meeting platform around the theme of the ocean. An Ocean Archive is the title of the exhibition, and of our research at large on oceans and islands, implemented last year during Art Basel within the Open Platform programme at the Asia Art Archive. Along with the exhibition, we are launching the first part of the archive as Our Ocean Guide with Venice publishers Lightbox. The book is neither a navigational aid nor a travel guide, but a collection of essays, dialogues and poems dedicated to expanding knowledge of places that often remain unknown and invisible.

CHT: You have invited contributors from many different backgrounds. Some contributions are very specific, such as a discussion of the foundation of coral sperm banks to save the reefs, or a poem in praise of the ocean by a Chamorro writer. What were you aiming for? MO: For this first volume of Our Ocean Guide, we invited 48 contributors. The selection is definitively subjective, and has been made throughout our journey, with a balance between geographic locations so that all the oceans are represented, except the Southern Ocean or Antarctic. The book is conceived as a polycentric and polyphonic work, bringing together artists’ projects and a number of theoretical and critical viewpoints on the past and present nature of the ocean. We did indeed invite contributors from multiple disciplines: scientists, including oceanographers, plus activists, anthropologists, artists, poets, architects, cooks, farmers and fishermen. It is a signature for us to favour this diversity of approaches, as we previously did with our HK LAB series. For example, there is a discussion with a coral scientist from Hawaii followed by an artist’s installation raising issues about the Great Barrier Reef, engaged in fruitful dialogue.

CHT: Do you feel an urgency to tackle this issue? MO: The mythology of the ocean declined in the 20th century. From ships to spaceships: the discovery of space has taken the place occupied by the sea in the collective imagination. Our main idea is to reactivate its mythical dimension. Of course, there have always been legends about the oceans, but the growing pressure from states and corporations is new. The ocean is targeted as a potential resource, a new territory to exploit, always more deeply. This destructive pressure is rarely mediated but the ocean is increasingly at the core of financial and political questions.

As artists, we propose another perspective on the ocean and the populations who depend on it. Also, we are living through an important moment of transition; all the fishermen we meet are about to disappear, together with their culture and traditions. Their kids do not want to continue in the job, and fish are becoming rare. If you consider only Hong Kong, what will be left without them? Will we have only urban landscapes, with human beings trapped in a concrete environment? We wish to put the ocean back in the front line, and to build an archive of projects about its invisible forces, including many islands.

CHT: You have been exploring islands both as physical territories and as concepts for many years now, for example in Desert Island (2009), which you exhibited again recently at the Singapore Biennale. MO: This installation takes the form of 100 mirror panels, each one engraved with the name and geographic coordinate of an island that stands out for its significance in the collective global consciousness. A wooden seating unit represents the 101st island, taking in this edition the topographical shape of Singapore. Our exploration of islands is far from finished; we are still working on the 260 islands of Hong Kong and the 160 islands, reefs and shoals forming the disputed archipelago in the South China Sea.

CHT: Studying the human within a territory has always been your focus. How do you approach this notion of territory? MO: For us, the relationship with the territory can be approached from two main directions: as a relationship turned towards the future, hence based on the power of the imaginary; and as an empathic relationship to the other. We often hear about empathy towards human beings and more recently towards animals, but now there is a need for empathy towards the territory itself. It is about reconnecting with it, redeveloping links between the human and its environment.

CHT: How do you reconcile empathy and imagination? Would to do so be utopia? Are islands for you places for heterotopia? MO:  I do not think we are developing a utopia. We are considering islands like laboratories.

CHT: You took part in the exhibition Uneven Growth: Tactical Urbanisms for Expanding Megacities at MOMA in 2014-15, where you were asked to develop a proposal for new architectural possibilities in Hong Kong. You answered with a map including mythological creatures, which certainly sounds utopian. MO: Of course – probably this idea of utopia is embedded in our practice and comes from our formation as architects: we were both nourished by utopias in architecture, from the French Revolution to the Italian Radical Movement of the 1960s and 70s. In Hong Kong Is Land (2014), we presented various sets of islands, some already exiting, others heterotopian and some even dystopian.

CHT: Does Hong Kong still influence you, as a laboratory? MO: Two-thirds of the planet is made from water and the territory of Hong Kong shares exactly the same ratio. After more than 20 years living and working here, we continue to explore and discover areas that influence our perception and shape our way of looking at things.

For Our Ocean Guide, we were essentially following the same process: investigating the coastline economies and ecologies but also the stories about the islands, and their imaginary dimension. We have moved from Hong Kong to exploring the ocean as a whole. For us, the reality encompasses not only the real but also the imaginary and the mythical.

CHT: Are you using poetry as a way to resist the real? MO: Poetry and literature are the best way to connect to the imaginary. They work as vehicle to transport the mind to faraway places. In that sense, they are actually more powerful than visual forms, but there is no idea of resistance to the real.

CHT: You have worked as editors before creating this guide, and this is not the first time you’ve surrounded yourselves with other people to develop a work. How was this project special? MO: What we loved was putting ourselves in the position of someone who does not know anything, and who has everything to learn. Honestly, we knew nothing about oceans before the project, and that was one of the great parts of it: we have learned so much throughout the process, so we were able to build our knowledge while sharing it at the same time. We also loved meeting different kinds of people, and conducting this research has actually changed the way we work and the way we travel, making us far more open to everyone.