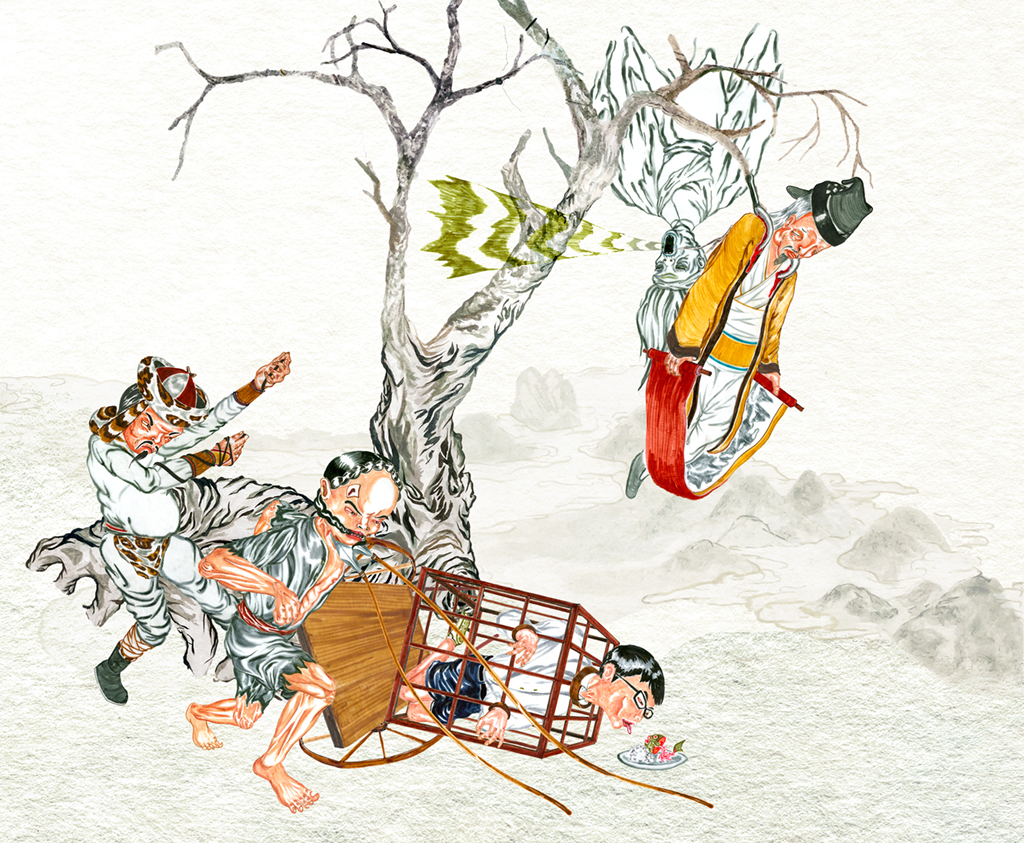 There was a time when lawlessness was king and opposing forces lived, plotted, colluded and fought out their differences without the intervention of authorities. Virtue was valued but bravery and resourcefulness were crucial above all else. Such an anarchic atmosphere was characteristic of both the now-levelled Kowloon Walled City in Hong Kong and the stories of wuxia, known in Cantonese as mou hap, a genre of fiction centred around martial-arts figures in ancient China. Hong Kong-born, Vancouver-based artist Howie Tsui drew from both for his solo exhibition Retainers of Anarchy at the Vancouver Art Gallery. His was one of three presentations in Vancouver by Hong Kong artists that marked the approach of the 20th anniversary of Hong Kong’s handover from the UK to China in 1997; in addition, the Vancouver Art Gallery also hosted group show Pacific Crossings: Hong Kong

Artists in Vancouver, and Tsang Kin-Wah presented three public works around the city. The centrepiece of the exhibition was the eponymous Retainers of Anarchy (2017), a 25-metre-long digitally animated scroll painting made from more than 100 of Tsui’s handmade drawings. The work depicts disparate scenes including torture, punishment, fantastical creatures and an imagined cross-section of Kowloon Walled City where nefarious goings-on are visible: a combination of real and imagined, rural and urban, and ancient and contemporary.

Typically set during the final days of the Song dynasty (960–1279), the characters of wuxia often originate from the lower social classes of Chinese society and fight for righteous values while remaining independent of aristocratic rule. Scholars have suggested that the stories were originally based on real characters and events. While evidence of wuxia stories dates back 2,000 years, during the 20th century the genre re-emerged as a symbol of personal freedom at the same time as a widespread break with Confucian values. Wuxia has been banned at times in mainland China due its fantastical themes and fears that it could conjure anti-government sentiment. In many cases its writers moved to Hong Kong and Taiwan to continue publishing. Perhaps its best-known modern master is Louis Cha, aka Jin Yong (b.1924), whose widely read writings have inspired television shows, theme parks, films – and Tsui’s artistic output.

Tsui was born in Hong Kong and lived in Nigeria for several years before relocating to Thunder Bay, Canada; having left the city aged six, his memories of Hong Kong were faint. When he was a child in Africa, receiving shipments of cassette tapes from relatives in Hong Kong and reading wuxia stories provided a link to the culture of his birthplace. After graduating from the University of Waterloo in Canada in 2002, against his tutors’ advice Tsui embraced his desire to draw cartoon-like imagery, which he does with humour and numerous cultural references. Projects such as Horror Fables (2009) drew from ancient Asian ghost tales and supernatural family anecdotes to underline the cult of fear in contemporary life. Similarly, his 2.5-metre-long scroll-like work on mulberry paper The Unfortunates of D’Arcy Island (2013) explored de-individualisation, political compliance and conformity through zombie culture.

Tsui’s starting point for Retainers of Anarchy was a visit to Hong Kong in 2010, his first since childhood, where he encountered the 120-metre-long digitally animated scroll River of Wisdom at AsiaWorld-Expo. The state-commissioned work, which was unveiled in Shanghai at the China Pavilion of Expo 2010, is a remake of one of China’s most famous paintings, Along the River During the Qingming Festival by Zhang Zeduan (1085–1145). It depicts an idealised scene in which intellectuals, monks, peasants and scholars lived together in prosperous harmony. The animation was billed by state-media sources as reflecting “ancient Chinese wisdom about cities”, and regarded by critics as a form of soft power and propaganda. In 2007 the original painting had been lent to the Hong Kong Museum of Art as a celebration of the 10th anniversary of the handover, in an attempt to encourage nationalistic pride in Hong Kong citizens – and no doubt to discourage growing pro-independence sentiments.

Setting out to explore the medium of the digital scroll, Tsui also borrowed inspiration from Italian-born Qing dynasty court painter Giuseppe Castiglione’s One Hundred Horses (1728), which combined Chinese painting techniques with western perspective rules. Retainers of Anarchy depicts a dystopian scene in which outcasts and outlaws roam among scenes of torture, ceremony, punishment and exile. A man is chained by his mouth to the ground, while a swordsman in robes flies in and out of view on a condor. Another man in ancient dress is hung from a tree. There are many contemporary references: Lam Wing-kee, the founder of Causeway Bay Books, who was detained and spirited across the border by the mainland Chinese government in 2015 for publishing unflattering material, makes an appearance, being dragged by an archer on a horse with an open book on his head. Joshua Wong, the teenage figurehead of 2014’s Occupy Central movement, is shown in a toppled-over cage, attempting to reach a plate of rice and fish, perhaps an illusion to his 108-hour hunger strike demanding universal suffrage for Hong Kong citizens.

Yet at the centre of the scroll is a cross-section of Kowloon Walled City, the lawless former neighbourhood which at its height was one of the most densely populated places on earth. Hundreds of makeshift multi-storey buildings and approximately 35,000 people were once jammed into a space measuring about 210 by 120 metres, delineated by a labyrinth of dark corridors and open drains. Previously a military fort, Kowloon Walled City was retained by China during the colonial period, even after Britain leased the New Territories in 1898. Britain regained control 11 months later, but left the settlement alone and did not venture inside to enforce the law. The area was a popular destination for Chinese refugees without visas and a hotbed of organised crime, prostitution, drugs, gambling and other illegal activities. The population grew sharply after the Japanese occupation during the Second World War, and triads largely controlled the area from the 1950s to 70s. Every business imaginable existed within the Walled City, including doctors, dentists, barbers, restaurants, sign-makers, print shops and small factories producing fish, sweets and clothing. Tsui’s animation provides a voyeuristic glimpse into several of the rooms, where people fight, smoke, vomit, train, cook, raise children, watch television and sleep. At one point, the view focuses in on a butcher in a green apron chopping meat with both hands, blood splattering around the room, and men carrying out mystical rituals. The clattering of mahjong tiles can be heard.

Kowloon Walled City was demolished in 1993 and 1994 as a result of the Sino-British Joint Declaration and the British government’s effort to beautify the city before the handover in 1997. There is now a HK$76 million park where the settlement once stood. Stories of the Walled City are still prevalent in popular culture, including books, films, manga and video games – a partial re-creation of the settlement was even built in an amusement park outside Tokyo in 2009. This romanticisation of an autonomous time echoes the popularity wuxia fiction and its fan culture. As Chinese scholar Henry Yiheng Zhao recently suggested, quoted in the exhibition catalogue by curator Diana Freundl, by revolving around characters who subvert rules in favour of self-determined virtue, wuxia is a “liberating force from the homogenising or assimilating power structures created by the dominant and/or colonial culture”. She adds that it “allows marginalised Chinese communities to deconstruct… power structures”. Two storied eras meet in Tsui’s work, with the artist using them as narrative tools for dissident and disobedience, and to explore, as he says, “how anarchic societies organise and develop codes of conduct to encourage order”. These questions of law, determination and power become increasingly relevant in Hong Kong as China gradually asserts its power over the Special Administrative Region.