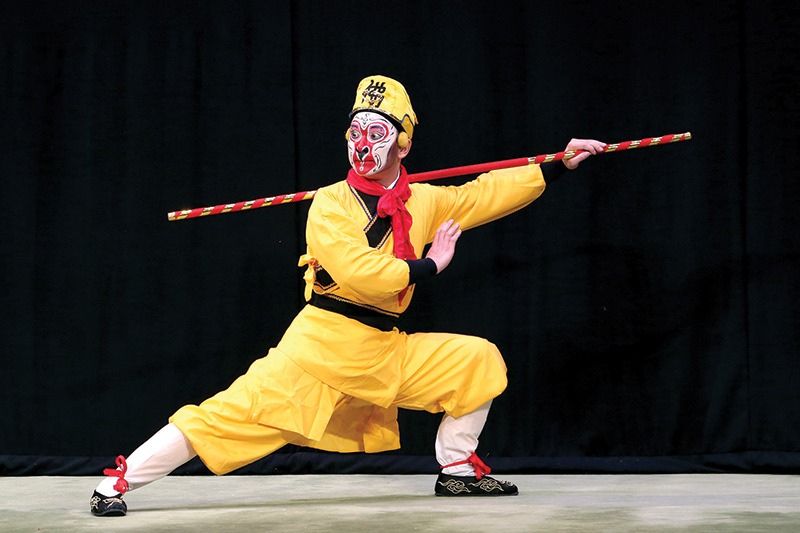 All eyes in Hong Kong’s performing-arts world are currently on the Xiqu Centre in the West Kowloon Cultural District, which is slated to open at the end of this year. The building is officially described as “a centre for the production, education and research” of xiqu, the Mandarin word for what has conventionally and conveniently been known as “Chinese opera”. Accordingly, since last year West Kowloon has been presenting a number of talks that seek to increase people’s understanding of this art form. However, every year since 2014 a local performing group has been educating the public on Cantonese opera — the genre of xiqu found in Hong Kong, Macau and mainland China’s Guangdong and Guangxi provinces — in a much more adventurous fashion: in the form of contemporary drama, in English, and mostly in other parts of the world.

According to Barbara Tang, executive director of Spring Glory Cantonese Opera Workshop, the idea of the theatrical work came from the inadequacy of talks on the subject. “For many years I have given talks on face-painting and costumes in Chinese opera. The non-Chinese-speaking audience members are always so eager to learn more that they shower me with questions afterwards, and I don’t even get to go to the toilet. So one day I said to Fai Gor,” referring to her husband, the esteemed veteran performer Yuen Siu-fai, “‘The foreigners are so intrigued by this art, so why don’t we go to Edinburgh [Festival Fringe] and tell them all about it?’”

The couple wanted to give the audience a more engaging experience than a talk could provide, so they asked the actress Musette Tsang, Tang’s daughter from a previous marriage, to write the script for a play and direct it. The story of this play, Backstage, involves a Cantonese opera troupe on tour in a foreign country, where a reporter, played by Tsang herself, has a peek behind the scenes of its inner workings. Yuen plays a master of the art who has retired and moved to the country visited by the troupe, whose producer is played by Tang. Having learned with the reporter about the art from the troupe members at work, the audience is invited to go onstage for some first-hand experience, such as having stage make-up applied and practising a few stylised body movements used in Chinese opera. All of this equips them with the knowledge to enjoy the ensuing performance, led by Yuen, of a substantial operatic excerpt.

Such an approach, says Tang, is able not only to answer questions people often ask about the art form, but also to encourage them to find out more about it. She highlights the embarrassment of richness offered by the various elements that are all integral to Chinese opera, which contrasts sharply, for instance, with Western opera, where the music is all-important; with ballet, where the dance is; and with drama, where the words and dialogue are. “You may not be a fan of the singing, but you may appreciate the stylised movements,” she says. “You may not find these movements graceful, but you may like the martial arts. You may not be into kung fu, but you may adore the make-up. But when all of these things are brought together, you’ll find it fascinating.”

Backstage has received broad acclaim since its 2014 premiere in Edinburgh, and has been performed in the Netherlands, Belgium, Italy, China, South Korea and back home in Hong Kong. The hometown performances this year are preceded by an outing in Singapore, and next year it will be taken as far afield as Hawaii and Costa Rica. These tours afford what is for most people around the world a rare opportunity to acquaint themselves with Cantonese opera, one of the three genres of Chinese opera, out of hundreds in existence, that are on Unesco’s Representative List of the Intangible Cultural Heritage of Humanity.

In Hong Kong there are at least six Cantonese opera performances each day, or more than 2,000 a year, according to Tang. Yet this art form is popular mostly among, and therefore generally associated with, the older generation. “Today’s [younger] Hongkongers are so busy and so impatient, and they have so many choices of entertainment. They may stay at home and play video games, or go out and watch a movie. But when it comes to Cantonese opera, even students won’t buy a ticket at half price to a three-hour performance of something they aren’t familiar with. We need to arouse their interest in it, so that they’ll want to come and discover more.”

Backstage aims to help the uninitiated develop an appreciation of this centuries-old art form, says Tang. Perhaps surprisingly, this can be easier with non-Chinese-speakers in the city. “Unlike many locals, foreigners often admire Chinese culture and don’t think of Cantonese opera as old-fashioned. They just don’t have an introduction to it and don’t know how to approach it. I hope that, after seeing Backstage, they’ll have the incentive to buy a ticket to the theatre.”

Tang describes Cantonese opera as “the most characteristic, traditional, authentic and indigenous performing art of Hong Kong”, and until the past few  decades it was a popular form of recreation for people from all walks of life. Given all the discourse in recent years on “localism” and the search for a Hong Kong identity, it is more important than ever for anyone concerned with the city’s history and culture, whatever his or her native land or tongue, to look into and draw inspiration from this art.