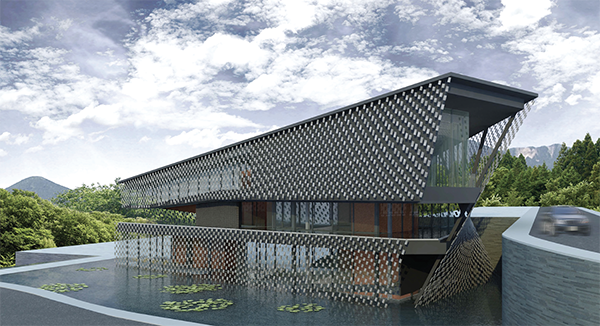 In the countryside about an hour’s drive from the centre of Chengdu in southwest China lies a hidden gem. Behind the greenery lies a pathway around a still pond, which reflects an obscurely shaped building. It appears to be comprised of two blocks piled up, covered with chains of tiles draped on the facades, gently reflecting sunlight under the blue sky, and forming a tranquil picture of nature and modernity.

This is Zhi Art Museum, designed by Japanese architect Kengo Kuma, one of the latest additions to China’s booming private museum scene. Zhi means “knowledge” in Putonghua, and reflects the institution’s ambition to become a cultural landmark in Sichuan province. The museum’s inaugural exhibition Open bringstogether nine international artists including Chico MacMurtrie, Mariko Mori, Carsten Nicolai and Zhang Peili, whose conceptual works challenge perceptions of contemporary life. The entire project is a statement on the value of art beyond the much-hyped art market.

Cities around the world are scrambling to lay claim to the title of cultural capital. GDP is no longer the sole indicator of a city’s value, and a vibrant cultural life not only brings entertainment but also knowledge, fulfilment and creativity. Many governments recognise this; for example, the Arts Council England published a paper in 2014 outlining the contributions of culture and the arts to the economy, health and well-being, society and education.

Chengdu, Sichuan’s capital, is one of the latest to join the race. The second-tier city of more than 14 million population, which has a history stretching back to 311 BC, generated GDP of 1.39 trillion yuan (HK$1.7 trillion) in 2017, the eighth highest in mainland China. It is already famous for being the home to China’s iconic pandas and delicious spicy hot pot that numbs diners’ lips and tongues, as well as beautiful nature. The city is already doing pretty well.

But its ambition doesn’t stop there. In addition to the first edition of Art Chengdu International Contemporary Art Fair, the city is eager to boost its cultural offerings. Cultural institutions, public and private, have a key role to play.

A 2016 study of Chengdu’s cultural ecology showed that the city has 86 museums, 49 of them public and 37 private. Although it suggested that there was room for improvement in public participation in these institutions, it also encouraged private sector to contribute further to cultivating the city’s cultural life. Art Chengdu, for example, managed to erect two marquees in the city’s pedestrian zone with the help of local government.

Zhi Art Museum was developed by property developer Fantasia Group, which has three companies listed in Hong Kong and mainland China. The museum is adjacent to residential blocks but its architecture and ambitious inaugural exhibition suggest it positions itself as more than just a decorative item.

A4 Art Museum is another stunning private institution in the city. Formerly known as A4 Contemporary Arts Centre, and founded in 2008 by Chengdu Wide Horizon Investment Group, the institution recently moved into a new building designed by Antoine Predock in Luxelakes Eco-City, a large property development with luxury housing surrounding a man-made lake.

Again the museum positions itself as more than just a value-added item to boost property prices. It is currently hosting Turner Prize-winning artist Martin Boyce’s solo exhibition Hanging Gardens, featuring the artist’s iconic installations as well as new works commissioned by the museum. Also on show is homegrown artist Chen Qiulin’s solo show Peppermint, in which she examines the dynamics of human relationships through new-media works inspired by visits to her estranged childhood friends. The institution is also home to a version Kohei Nawa’s iconic PixCell-Deer which is over five metres tall, the largest the artist has ever made.

By contrast most Hong Kong property developers lag far behind. Some have stagied exhibitions at shopping malls, but only a tiny number dedicate resources to authentic arts and culture programmes. Resourceful individuals have been turning their passions into mini private institutions like F11 Photographic Museum and Liang Yi Museum that showcase their private collections, but there is a lot more the property giants can do. Building a vibrant, sustainable cultural ecology is not just the responsibility of a few people.