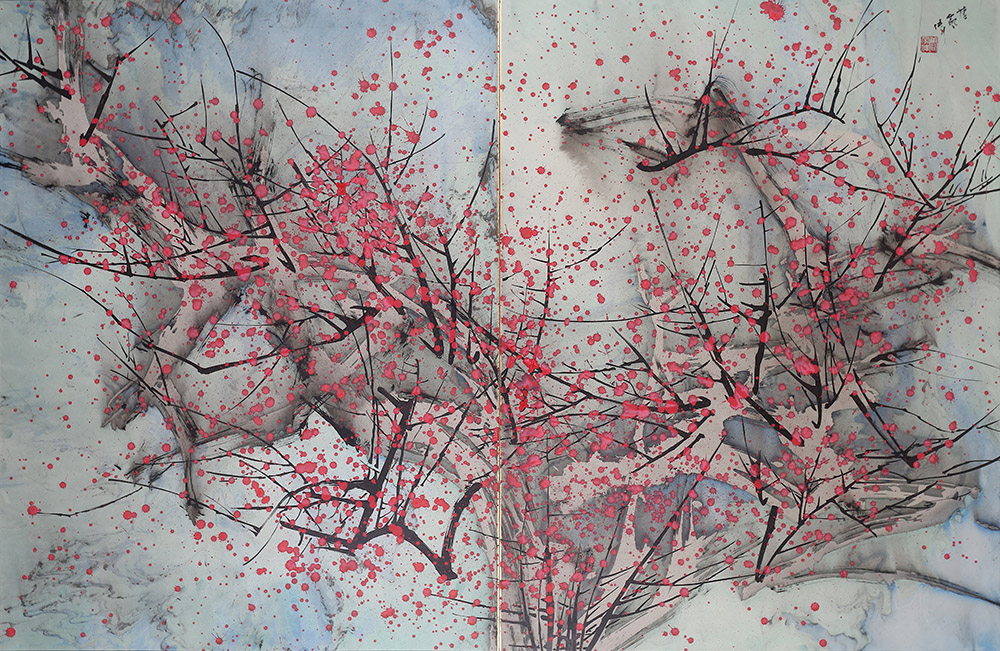 The idea that life is a spiritual journey was once common in European and American religious culture: Pilgrim’s Progress, John Bunyan’s 1678 allegorical adventure of a Christian soul, used to be required reading. Spirituality has largely fallen by the wayside, however, replaced by modern materialism. In developed countries now we focus on scientific and economic progress, and largely neglect the spiritual aspect of life, still part of the social menu of traditional cultures, which patronising contemporary standards adjudge backward.

The paintings of Hong Kong artist Wesley Tongson (1957-2012), aka Tong Ka Wai, in The Journey at San Francisco’s Chinese Culture Center through March 9, 2019, constitute a spiritual pilgrimage as well. Curated by Catherine Maudsley, and featuring biographical notes by Cynthia Tseng, the artist’s sister – who, she reveals, did her brother’s art homework when he was a child, before his interest in art surfaced in adolescence – the show reveals a talented hand, both disciplined and intuitive, at the service of a restless, relentless creative drive.

Tongson, who grew up in a Chinese Christian family in Hong Kong, was diagnosed with schizophrenia at age 15, in spring 1973. Shortly afterwards, at age 17, he declared an interest in studying traditional Chinese painting, and began taking lessons, encouraged by his family and teachers. Says Tseng: “Due to his illness, Wesley could not do anything else. Art was the only thing he could do. He was good at it and it was what made him happy, so my parents were supportive and encouraged him to continue. Wesley was a lonely person. Later, when he retreated into his own world, he disconnected with friends and family. Art was his life; it gave him purpose and the courage to go on: his constant companion. He found solace in his art. He was able to cope with his illness,” including his paranoia and the side-effects of his medication. “Without his art, I honestly don’t know how he would have survived all those years.”

Not only did Tongson survive; he thrived, visibly, in his art. The paintings on board and paper, framed or mounted onto wooden strainers, are artfully laid out in the venue’s three small galleries, with pairs of large coloured landscapes flanked by monochromatic calligraphic paintings, facing each other: landscape and calligraphy, the twin poles of traditional Chinese painting, recapitulated and reinterpreted with modernist verve and dash. Along the adjacent hallway are smaller works that show the evolution of Tongson’s famous splashed landscapes, accompanied by writing by the somewhat reticent artist and his sister, a talented keeper of the flame.

While a chronological arrangement that traced the artist’s development would have been preferable, the space dictated the arrangement; attentive viewers can puzzle out the progression, however, and the works of various styles speak to each other anyway. While still in high school in Hong Kong, Tongson studied traditional Chinese painting styles and themes, such as pine trees, plum blossoms, bamboo, with their symbolic and homophonic associations with longevity, perseverance and congratulation respectively. With incessant practice, he became a young latter-day guohua painter in the retired-Confucian-scholar mode before graduating in 1977. At Ontario College of Art from 1977 to 1981, he studied western painting, especially the metamorphic Picasso, and began experimenting with splashing ink, probably influenced by Jackson Pollock and certainly by Zhang Daqian (1899-1983), the versatile modernist master, and virtuoso mimic/forger of older masters, who sported an antiquarian long beard and flowing robes, and developed a late splashed-paint style, pocai, which came, as Tongson writes in a letter, directly from his heart.

Tongson returned to Hong Kong in 1981, studying with Gu Qingyao and Huang Zhongfang, and he continued experimenting with and perfecting various non-brush ink application techniques. He was instructed by Taiwanese painter Liu Guosong in ink staining, rubbing, dyeing and marbling – floating ink on the surface of water and dipping the paper into it, capturing the swirling, cosmic patterns used for the psychedelic end papers of deluxe books. These masterly landscapes, combinations of time-honored themes and new techniques, garnered praise from critics and collectors, museums and galleries in Hong Kong, Beijing, Suzhou and London. The artist, whose visions originated in Mahayana Buddhism’s Western Paradise, and who called these richly textured works, improvised yet impossibly perfect, his Zen Mountains of Heaven paintings, referred to himself at the time, with irony and pride, as shandou laoshi (mountainscape teacher). Finally come Tongson’s late, monumental landscape paintings, created with his hands, fingers and fingernails, without tools: direct transcriptions of his nervous system, like Pollock’s loops and skeins of liquid paint flung from a stick.

San Francisco is fortunate to have even this modest sample of Tongson’s prodigious output of work, the latest of a series of exhibitions assembled by the Tongson family, which can take pride in the achievement of its prodigiously talented, hard-working, solitary son. It includes a few extraordinary works worth singling out: the three 1992 calligraphic splash paintings The Light, Blessed Rain and God’s Light, pictograms that seem to be both carved and liquid, monumentalyet evanescent; Red Plums Over the Earth (1993), a traditional bucolic motif given explosive energy, with the plums represented by perfectly sized and placed drops of vermilion ink; Plum 5 (2011), with fruit-laden trees dissolving into what appears a dance diagram or musical score; and Mountain 1 (1995) and Misty Mountains (1993), small, magical miracles of evocation: paradise, regained.

Featured image: Red Plums Over the Earth by Wesley Tongson, Ink and colour on board, 1993.Courtesy Cynthia Tongson and Chinese Culture Center of San Francisco.