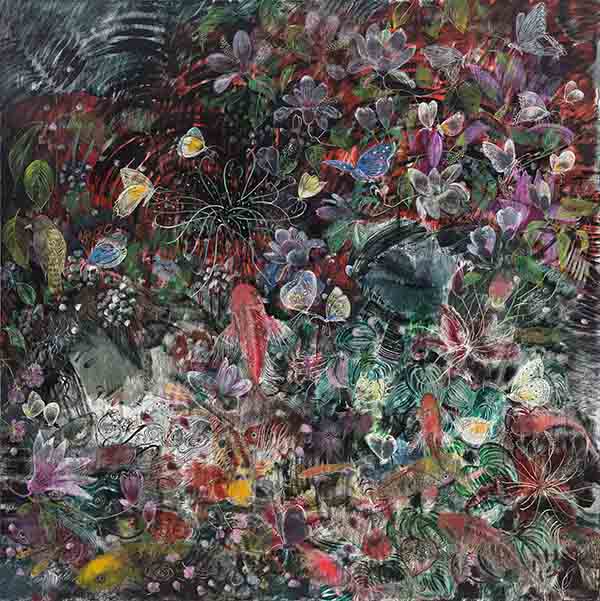 A drastic pivot between pleasure and gloom marked Beijing-based painter Shen Ling’s exhibition Intensity of Concreteness at Tang Contemporary. Embodying the latter, five of the 10 large-scale, square canvases in the show were of melancholy outdoor scenes rendered in cursory lines and layers of dry-brushed grey and blue paint. Black Crows on a Tree (2018), for example, depicts an incredulous orange cat glaring from beneath gnarled branches, while the hero of Winter Star (2018) is an emaciated tree veiled beneath sheaths of pearly rain. In contrast, the five other paintings teemed with abundance and joie de vivre, their densely layered compositions depicting men lying in repose among flowers, birds and stirring blades of grass.

Camouflaged beneath foliage, some of the men hold cameras, as in Jealous Night in Flowery Wind No.1 (2017); they appear pensive, passive and wholly unaware of Shen’s gaze.Along with her husband Wang Yuping, Shen is often classified as a member of the New Generation of artists who emerged from Beijing’s Central Academy of Fine Arts in the 1980s equipped with rigorous training in realist oil painting. These strict techniques for representation were unravelled and refashioned into expressive, often figurative styles. Over the past 30 years, Shen’s paintings and drawings have dripped with sensuality, often featuring flowers, and men and women in various states of coitus. Poetic, sensitive and deeply introspective about what it means to be both a woman and an artist, Shen has long painted herself into her works. At Tang, her likeness observed viewers from the centre panel of
the sombre 2016 triptych Autumnal Wind and Rain on a Moody Day. Posing in the mist before a knotted tree, the artist dangles a paintbrush from her hand, while two red devil’s horns poke out of her head.

That it acted as a small survey of Shen’s varied recent output rather than a cohesive grouping of related works was the only downfall of an otherwise excellent exhibition. Sectioned off from the gallery’s main space was a narrow room with several delicate framed pencil drawings, including the series Smog, in which graphite is smudged across simple line drawings of trees to represent Beijing’s pollution (the series is exhibited under a different title in mainland China). Ephemeral (2015–18) is a
particularly tender sketch of Wang reading a book across the table from Shen; her husband is one of her most regular subjects.

The most remarkable work in the exhibition, however, was the fanciful painting Sleepwalking (2017), which the artist says came to her in a dream. Measuring two by two metres, the canvas teems with the curving bodies of softly painted fish swimming among thick, chaotic, layers of black palm fronds, pink petals, green leaves, concentric ripples, butterflies and butter-coloured birds. Almost hidden beneath the dense foliage and aquatic life is a long-haired man’s smiling head, which appears to be covered in fish scales. In its extravagance and layered excess, this painting best demonstrates Shen’s mastery of planting capricious details in her works that reward a lingering gaze.