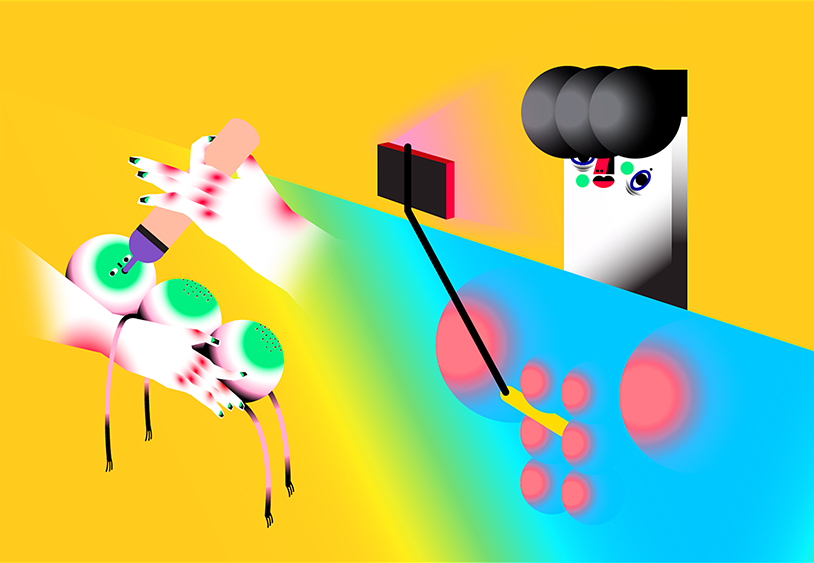 Half-used paint. Paint-streaked trainers. Crinkly plastic drop cloth. Three panels in shades of pink and orangey-red. A scene of unfinished business. But there is also a palpable sense of energy to it. On the wall opposite, an oil painting depicts a row of female nudes ascending the stairs, their bodies half-translucent, their flesh cutting into each other, giving a sense that whoever was there a moment ago had hurried off, leaving behind a trace of their presence.

The two pieces could have been by the same artist, but they’re not. While the trainers and panels – meant to evoke “the carnal colour of the flesh”, according to the exhibition catalogue – are part of Pamela Rosenkranz’s Sexual Power (Three Viagra Paintings), the nudes belong to Jana Euler’s Nude Climbing Up the Stairs (2014).

It is a liberating but also curious opening for Performing Society: The Violence of Gender, a show that – as one discovers in the proceeding exhibits – puts the systemic violence done to our bodies on glaring display. The exhibition is curated by Susanne Pfeffer, and features 11 artists from Hong Kong and abroad.

Violence and the idea of the fragmented body appear to go hand in hand in the exhibition. The first hint of this is in Dong Jinling’s Dong Jinling 2-1, a cautiously optimistic video featuring a close-up of her hand repeatedly squeezing milk from her left breast. The action is a symbol of life-giving, and a mother’s love – and sacrifice – but, by only using only the left breast, it’s also delightfully defiant, speaking to a desire to reclaim a part of one’s body for oneself. This defiance, however, comes with its woes, as the artist discovers that her left breast has had to grow larger to accommodate the flow of milk.

Things get darker with Marianna Simnett’s The Udder (2014). Despite featuring the body – both human and animal – in all its literal fleshiness,it posits a much crueller narrative than Rosenkranz’s work. The video is set inside a cow’s mammary gland, the various sections separated by screens of crimson gauze. Three kids – a girl and her two brothers – flit between the screens, but the innocent setting is undercut by close-up shots of the mechanised milking process, and parallels drawn between the girl’s chastity and the cleanliness of the cows’ udders, lending the video an eerily sinister air. Simnett is known for her unsettling videos – two audience members fainted at a showing of her works at London’s Serpentine Gallery – and in The Udder, that disquieting moment happens when the girl, defying her mother’s orders to never leave the mammary gland for fear of contamination, slashes her nose, a nod to Saint Abbe the Younger, Abbess of Coldingham, who cut off her nose to avoid being raped by the Vikings.

Ma Qiusha’s Must Be Beauty (2009) is less morbid but no less disturbing. The four-minute video features the artist ingesting jar after jar of eye cream, makeup remover and lotion, the slurping and gulping sounds an assault to the ears. It’s an outright rejection of societal standards of beauty but, as with Dong Jinling’s act, resistance comes with its cost.

Ma’s From No. 4 Pingyuanli to No. 4 Tianqiaobeili is a comparatively literal telling of the pains of growing up female in a society that still favours the male sex, and the physical and psychological violence that the state education system inflicts on a person. Ma, with her impassive gaze and deadpan voice, is a good storyteller but the piece pales in comparison to Must be Beauty.

The ambivalence of Must be Beauty also underlies Raphaela Vogel’s Uterusland, where a giant breast is sliced up into two halves, its muscles and sinews exposed, as in a biology lab. While a white rope shoots from one half to nourish a unicorn-white creature, the other half is used to morbidly illustrate various types of breast cancer. Opposite this clunky installation is a video of a woman clutching a baby in terror while sliding down a pink-coloured tunnel which could be either a playground slide or the interior of the female reproductive organs.

Wong Ping’s Who’s the Daddy (2017) offers the only male perspective in an exhibition predominantly dedicated to exploring the female psyche. In the highly entertaining video, a male narrator suffering from an existential crisis ponders his “straight, small penis” as he takes selfies for a dating app, lifts weights and goes on a date. His efforts are admirable but ultimately redundant, as the video culminates in the gruesome scene of a lover grinding her stiletto heel on his eyeball, tearing it out of the socket. If stilettos symbolise female subordination in a patriarchal system, this scene points out that female and male bodies are oppressed by the same forces.

Installed behind From No. 4 Pingyuanli to No. 4 Tianqiaobeili is Anne Imhof’s Prior Park. Its title is also the name of an early 18th-century Palladian house in Somerset in the UK, but that seems to bear no relation to the chair in the room. Grey, snug-looking, but also equipped with wrist and ankle locks, the design appears to be an odd hybrid of a massage chair and a restraint chair. On the back rest, an abstract symbol evokes an emblem that might adorn a university hall or prison gate, a reminder that control and oppression come in many guises.

In contrast to the clinical Prior Park, the artist’s scratch paintings are surprisingly freeing. In I Promise to be Good I and I Promise to be Good II, she clawed through an upper layer of black paint to reveal a white, contrasting colour beneath. It’s reminder that there is always something beneath the surface, an alternative to the status quo, but it’s also a way to assert presence, its free-wheeling sensibility bringing to mind Rosenkranz’ Sexual Power (Three Viagra Paintings).

Perhaps the first step to beating structural violence is to go beyond thinking about the physical confines of the body, towards the fact that we simply embody. While Prior Park’s emptiness focuses on the absence of the corporeal body, the scratch paintings testify to the messiness and struggle of lived experience.

Just when you think you’ve reached the end of the exhibition, a white door opens to reveal Oliver Laric’s Untitled, a soothing video that calls for the malleability of identity. An astronaut boy morphs into a puppy, a wolf claw into a human hand, and a polar bear into an Inuit. Is this what escaping the body looks like? But the smooth transitions, the soft contours, rid of the toil and tussle of the other works on display, look out of place. Unlike Simnett’s or Imhof’s works, where there is so much brutality and tragedy but also vitality, Laric’s figures appear a little unreal.