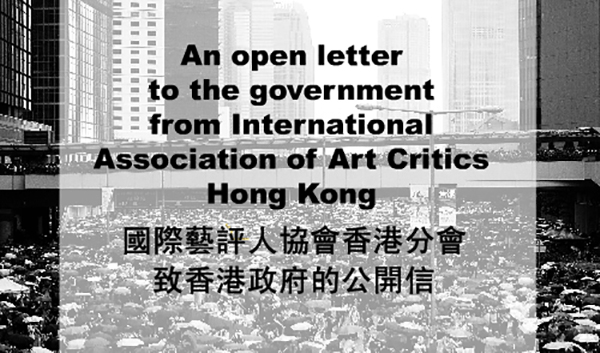 We write with great concern after the violent events in Admiralty on 12 June 2019.

AICA was founded in 1950 under the patronage of UNESCO, with the main objective to support worldwide art criticism in all its forms. AICA has over 4,600 members, grouped into 61 different sections around the world. The Hong Kong section of AICA was established in 1996.

One of the main objectives of AICAHK is “to defend freedom of expression and thought and oppose arbitrary censorship.” AICA-Hong Kong and AICA-Taiwan are currently the only AICA sections located in greater-China as, currently, the People’s Republic of China does not fulfil AICA’s human rights and freedom of expression criteria. It is an unfortunate and embarrassing reality: the mainland is not able to be a member of AICA.

Hong Kong has the rule of law, freedom of expression and assembly and an independent judiciary. The mainland, seventy years after the founding of the People’s Republic ofChina, doesn’t.

And that is the crux of our opposition to the proposed fugitive/extradition legislation: human rights and judicial independence on the mainland do not currently fulfil international standards.

We urge you to please withdraw the legislation.

Furthermore, a dialogue with pro-democracy legislators and community representatives needs to be urgently initiated to restore the public’s confidence in thegovernment after the extraordinary violence between protesters and the police on 12 June 2019.