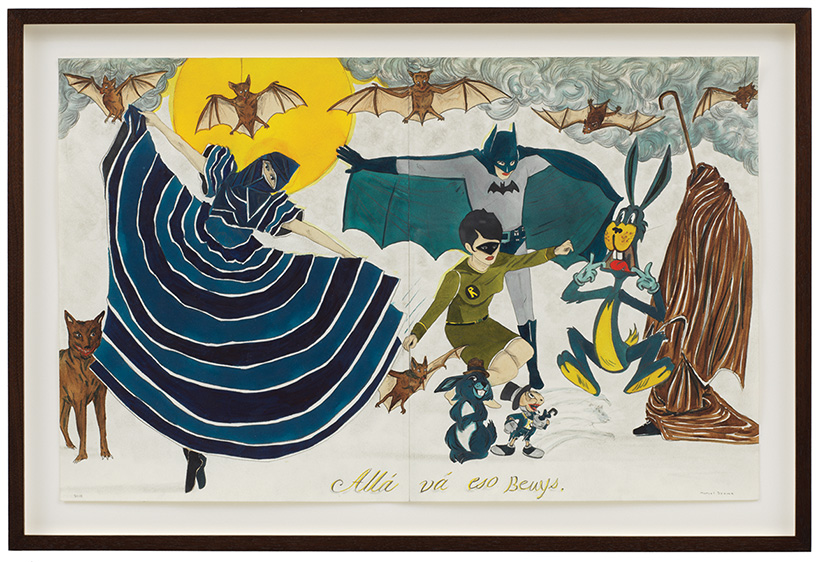 If artists are historians of our times, Marcel Dzama represents the present. Canadian-born, New York-based Dzama references the contemporary climate in the US under Donald Trump’s presidency; this was paired with influences from elsewhere, in particular Hong Kong, for his recent show at David Zwirner, which spanned both floors of the gallery.

Dzama departs dramatically from his earlier approach of sparse characters on plain paper, with his style morphing into colourful, large-scale works that are bold and chaotic but meaningful. The new approach was influenced by the work and looser approach to creation of his friend Raymond Pettibon, as well as Dzama’s time living in and visiting large cities such as New York and Hong Kong, and the vibrancy and crowded energy of these places.

The neon lights of Hong Kong aren’t Dzama’s only inspiration; the city’s iconic horse racing also features as a prominent theme across multiple works, including Ghost riders (or Watch out he don’t fall on you) (2018) and On the Track with Brother and Sister Ray (2018). Dragons and pandas also make an appearance but it’s unclear whether they’re infiltrating or protecting, an ambiguous nod to Hong Kong’s relationship with Beijing.

Throughout the exhibition, images are filled with an abundance of visual references. Animals are scattered throughout the frenzied scenes as musical instruments are blown. In works such as It’s time they paid with the tyrant’s head (2018), figures dance around the pieces as others shoot arrows or ride horses defiantly across the paper. These carnivalesque creatures attempt to unsettle and undermine; the characters appear ready for battle, but we don’t know whether they’ll win the war.

Surreal situations feature tricksters, witches and bats; someone is playing with an iPhone in the jungle in Why the darkness and obscurity in all your words and laws that none touch the fruit in the serpent’s jaws (or Everything that blooms in holy, or A garden we know nothing of) (2018), while at the bottom of The afterbirth of a nation (or The shame-faced one) (2018) is Donald Trump’s severed head on a plate, spewing an upward fountain of toxic gas. There it goes Beuys (2018) depicts the artist Joseph Beuys’ infamous performance I Like America and America Likes Me (1974), in which he spent three days in New York locked in a room with a coyote, except now the coyote is hiding, shielded by the dynamic duo, Batman and Robin, along with a spinning dancer; instead of living with one wild creature, maybe the whole world has become untamed, with even those supposed to be our heroes swept up in the frenzy.

The nightmarish quality of the work is balanced by Dzama’s use of humour and identifiable imagery, a familiar method of challenging systems of power. Recognisable cartoon faces are spread around the scenes, mocking or encouraging the actions of their masked friends, cheering for them to fight or fail in their attempts to change the course of our world. The cartoons themselves are sourced from a variety of places: silent films, comics, Disney and even Felix the Cat and fairytales, with many deriving from material Dzama read with his young son. Several of the works started out as automatic drawings, some undertaken on trips to the beach with his son, which display a slightly more optimistic tone. This freedom of artistic flow also allows for open interpretation of Dzama’s world.

Many of the pieces in the show make use of text and its vague quality, with words and phrases taken from song lyrics, horse names, poetry and even Goya’s series The Disasters of War (1810-20). He uses lifted Chinese text, sometimes without knowing the meaning, layering cultures and allowing for a playful element of chance. The combination of this text and these colours and layouts, especially in some of the larger works, such as The land of the bat (2018) and And who breaks a butterfly on a wheel? (Or A rapture, a butterfly, a dancer and a bowie knife (2018) allude to posters for low-budget science-fiction or horror B-movie – but we are all players in this twisted reality.

An excerpt from one of Dzama’s films is shown on the bottom floor of the gallery, starring Pettibon, comedian Amy Sedaris and the artist’s son. Alongside it is a storyboard for the production, Storyboard of The Tension Around Which History is Built (or Storyboard Chapter 3 of a Flower of Evil) (2018), featuring a chess game, a metaphor for a dance or war, animated as a ballet performance; a villainous opponent; a vampire gallery owner (David Zwirner, played by Pettibon); and an extreme version of Dzama himself, played by Sedaris.

Despite the many references to the US, the unpredictable situations depicted also apply around the world. The works reflect the present, but the references in Dzama’s work may shift as times move on; sourcing them from a plethora of eras, artists and types of culture allows his work to evolve and remain timeless, while remaining a reflection of the contemporary that allows us to learn from the past.