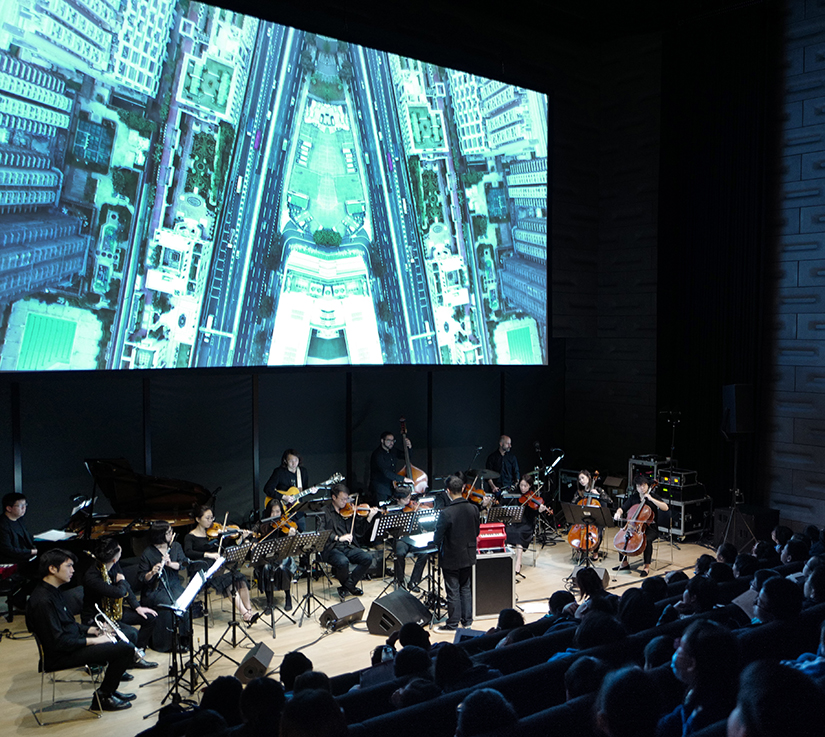 Hong Kong Episodes (Re-run) is a shorter, revised version of an October 2015 show that was conceived amid the social unrest in the city the previous year. The programme note describes the production as a “jazz-classical cross-over piece… accompanied by… video images”, but the visuals turn out to be just as important as the live music, if not more so. One reason is that the video depicts scenes with skyscrapers, housing estates, neon signs and people in a subway station, for instance, that are unmistakably Hong Kong — which makes it impossible not to take the title of the show
seriously — whereas the music has about it nothing especially evocative of Hong Kong or, for that matter, any particular locale.

Another reason is that the visuals, largely created by Anthony Lai, play with both time and space so effectively that the viewer’s attention is absorbed throughout. Among the eight “episodes”, each representing a three-hour period in a day, is a video, shot with a stationary camera, of burning joss sticks at a temple, played backwards and in slow motion. Another episode presents aerial video taken along a coastline, with roads and buildings on one side and the sky-blue sea on the other, immediately followed by a sequence, shot with a camera mounted on a street-roving vehicle and pointed upwards, that shows the upper parts of high-rise buildings against the backdrop of a sea-blue sky. With the sky looking just like the sea, the top of each building has now seemingly turned into its base, and from apparent sea level these upside-down buildings rise too high to fall within the frame — a giddy-making effect.

The music for half of the episodes was composed by Fung Lam, who conducts a small ensemble of strings, flute, trumpet and saxophone, as well as a jazz band comprising drums, bass, piano and guitar, the last played by Teriver Cheung, who wrote the other half of the music. In general, Lam’s music is used for the episodes with slower-moving images, and is contemplative and given to gradual build-ups, with sustained string chords as a characteristic sound, while Cheung’s goes with the more flowing episodes, and is marked by capricious changes of mood, pungent harmonies, abundant jazz improvisation and hectic excitement at climaxes.

A final surprise comes in the form of an avowed “encore”, one of the numbers from the original show that, the conductor tells the audience, had been excised from the latest version. This composition by Lam is the most overtly melodic of the evening, and indeed the yearning melody verges on the sentimental, as if the melancholy underlying much of his preceding music can no longer be contained. This explosion of pent-up emotions, combined with slowed-down images of a firework display, could be suggestive of faded glory, innocence lost, hopes dashed in the wake of the events of 2014. It is uncannily apt that such a wistful piece, professedly withdrawn, should have the last word.