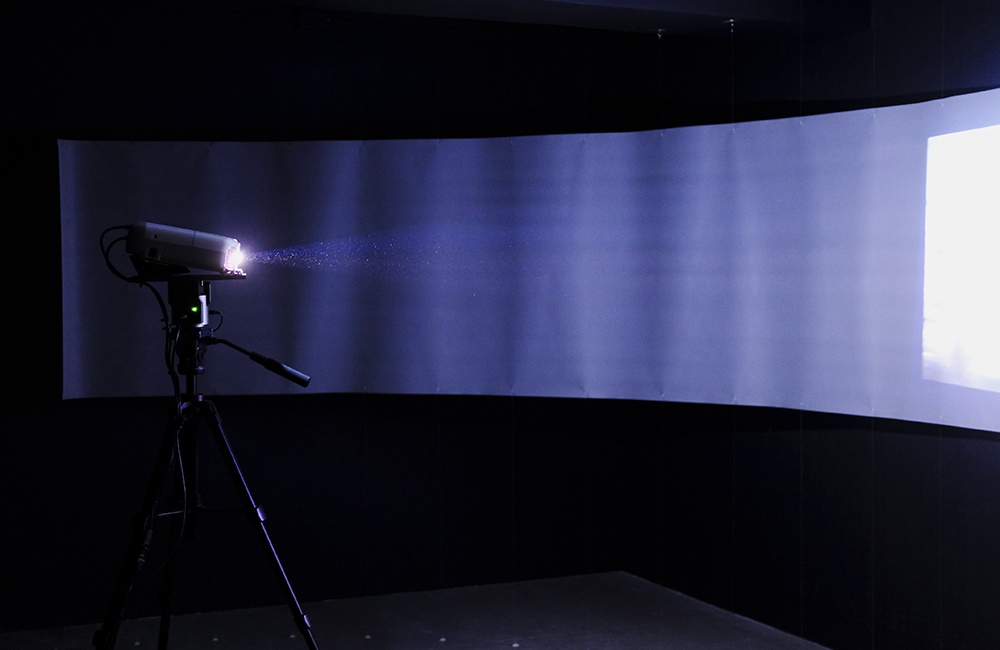 special about an onion

It deserves all criticisms

Despite an earthy costume

Its nature is not agreeable. Peel off

layer after layer, there is nothing inside

that can be called sophistication! How formalistic!”

What About Home Affairs?, the title of Para Site’s retrospective of Ellen Pau, pioneering Hong Kong artist and co-founder in 1986 of the city’s first video and media art collective, Videotage, can been construed as a bilingual pun, taking in both Hong Kong politics and the shackles imposed on women in the home and society. “Home Affairs” brings to mind the Home Affairs Department, which is responsible for Hong Kong’s internal affairs. The ambiguity of the words creates a discrepancy between the title in Chinese and English.

In her essay in the exhibition catalogue, video artist Lo Yin-shan, who emerged a generation later than Pau, references academic David Wang Der Wei’s post-loyalist theory to point out that Pau’s Emergence (A work in progress) (2016) was an act of untimely resistance. Post-colonial theory has become unfashionable in Hong Kong, not only because discussion of the city’s colonial past is considered taboo among supporters of Beijing, but also because young artists can see little value in the theory in a globalised era. But there is radicalism in Pau’s treatment of the bauhinia, Hong Kong’s emblem, which has had the first character of its Chinese name amputated because it means “foreign”. In her work Pau tries to reinstate the plant’s original name. The work’s cleverness lies in its appropriation of science, where the matter speaks for itself; she picked a bauhinia in the park outside the gallery, then mapped its genome and turned it into sound, and makes a positive identification of the first segment of its genome that becomes physical evidence of its less than complete form, but done in a way that is inconspicuous. The beauty of the work is less in the subject of resistance than in the use of neo-materialism and abstraction to expose political lies. From analogue tapes to digital videos, Pau’s exploration of new media for the last dozen years has reached maturity with this piece.

Nevertheless, solely political interpretations of Pau’s work miss its sentimentality. To access the exhibition space on the top floor, the visitor has to take the lift from the ground floor, then turn into the dimly lit space. There the curator lets the audience sit on a brown sofa and watch, mesmerised, two of the artist’s earliest works, TV Game of the Year (1989) and Blue (1989-90). This kind of brown sofa is well known to Hong Kong’s older generations, as they were used in government offices under British colonial rule. The curator not only used timelines and facts displayed on the wall to let the audience understand the artist’s life experiences and related events, but also used the materiality of the work and the exhibition space to let viewers immerse themselves. As a response to the 1989 Chinese Democracy Movement, Blue did not use a single frame or image from the avalanche of news footage shown on Hong Kong television at the time, capturing the emotion after June 4 with just a flickering blue abstract image. By contrast the neighbouring TV Game of the Year indirectly clarified the historical context of Blue through several Hong Kong artists’ humorous impersonations of then Chinese premier Li Peng. Projection Drained (1988) is even more experimental: at the time there was no video projection, and geometric images captured on a television with a camera become abstract.

What About Home Affairs? might be a retrospective, but it is one in the present tense. Because it is difficult to recreate the media art of the past as the technology used to create it has become outmoded, it has to be recreated using newer technology. But the curator and artist did not see new technology replacing old as a mark of the end of an era. Recycling Cinema (1998), which was exhibited at the 2001 Venice Biennale, has frequently been interpreted as a commentary on post-97 Hong Kong politics. But the artist’s life experiences and melancholy behind the camera have rarely been commented on. The most moving, emotional work in the exhibition was Bik Lai Chu, which juxtaposed the old and the new. The original 1993 video installation was a recording of the artist looking up and slamming into a wall, a site-specific piece created to be projected under a table in the dressing room of the Fringe Club. The recreated video in this exhibition was projected in a closet that was easy to miss. The room was almost completely dark on opening the door, and the projection was in the attic, above a mass of household items including plastic boxes, imitation jewellery and a folded wheelchair; the technology of art and the technology of living both left their marks on the artist’s life.

It is rare to be able to understand Hong Kong society and the development of contemporary art through the life journey of a female artist. And sadly, it seems that even the godmother of video art is still unable to headline Art Basel.

Recycling Cinema vs Big Brother is Watching You