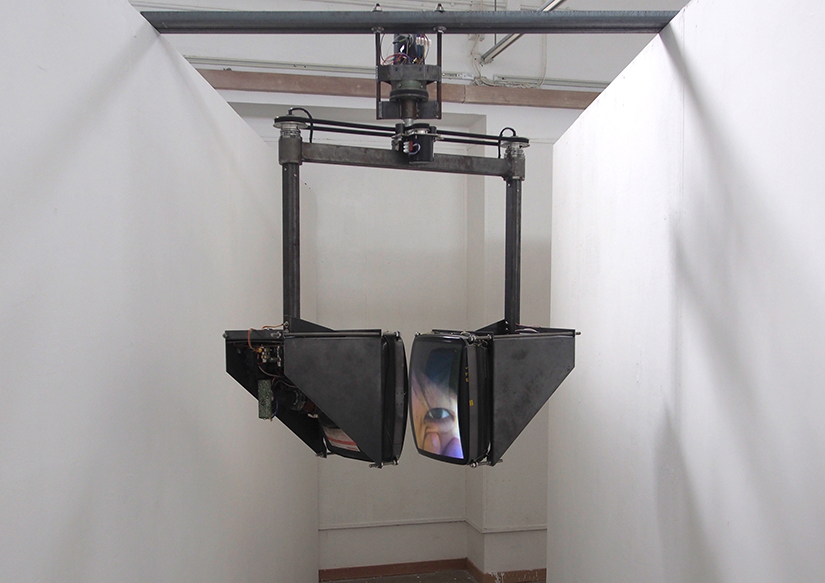 Hong Kong artist Tung Wing Long’s recent solo at CL3 Architects’ Wanchai office is a short but nevertheless sweet paean to the medium of video, where exciting things are happening right now, bolstered by new editing tools, the possibility of ever bigger screens and the general obsession with the immersive.

The first thing the visitor sees on entering Following the Imagined is a video of a sleeping head. Inspired by Constantin Brâncuși’s The Sleeping Muse, Untitled (head) examines the idea of the medium itself. The term video art is often used interchangeably with the moving image; the piece questions whether a video needs to be moving for it to be considered video art.

The eerie stillness of Untitled (head) is quickly disrupted by the spinning and whirling elsewhere. Immediately behind it, i/i is an installation of two CRT TVs that move in a continuous circular motion until at one point meeting before turning away. The two screens depict blurred views of a cityscape, though there is one moment when the artist appears, seemingly in excruciating ecstasy or pain. In Hundred Jumps, a pair of feet continuously skip over a cable tie that is attached to the screen itself. Tung’s videos exist in the liminal space between the real and the untrue, between what happens behind the screen and before it, between what exists and what doesn’t.

That experimentation continues in Mind Cut, consisting of six video panels spinning clockwise. Attached to it is a stick, the tip of which is an LED light, that keeps whipping the whirling piece. Look at it long enough and your
head starts to spin. A similar disorientation is provided by the sense of fragmentation pervading the show: the artist’s fragmented body, explicitly seen in Untitled (Head) and Hundred Jumps, but also the diffusive contemporary self. Snaking through the art, the viewer feels pulled in different directions. Focusing on the blurry images on the two screens of i/i inevitably means being distracted by the whirling Mind Cut behind.

But the show is also as unapologetically indulgent as it is contemporary. It doesn’t concern itself with race relations, gender politics or the larger sociopolitical questions of the day; its primary concern is with the pleasure of art itself.

Unlike In Between, a previous work that uses modern LCD screens, the vintage CRT TVs hark back to an earlier period in video art history, when the medium itself was seen as art rather than screening vessel, and as such bore a closer resemblance to abstract painting than sprawling visual essay. Tung’s videos, rid of any narrative content, pull the viewer in not by any particular stories they tell, but by the visual experience they promise. This is art that demands your time, not because it’s vast or because you need to pore over lengthy captions, but because it has the power to alter your sense of time and space – if you allow it to.