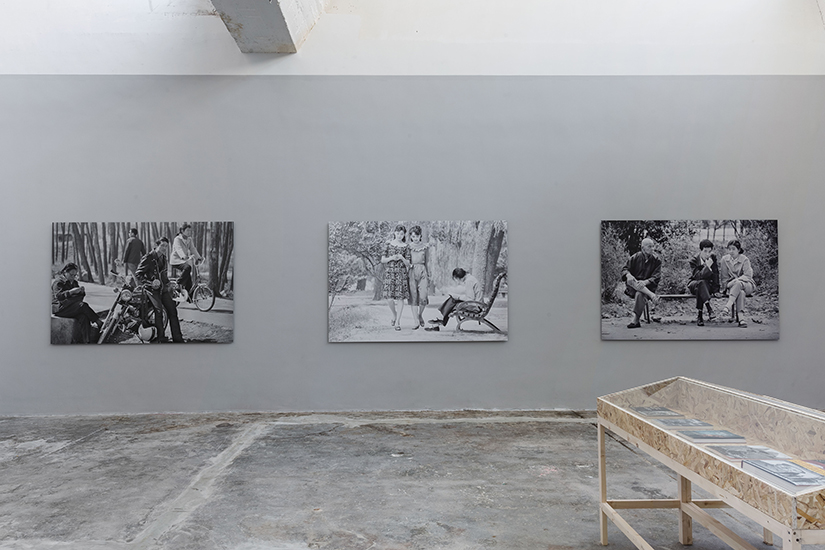 A carefree rollerblader whizzes past a large statue of Chairman Mao at Dalian’s Institute of Technology in 1981. Like this one, each of the pictures in award-winning photographer Liu Heung Shing’s solo show Spring Breeze is a reminder of the enormous changes China has experienced since the “reform and opening up” that started in December 1978. For some audience members it is a trip down memory lane. For others it is a lesson in China’s recent history: Mao statutes were and often still are ubiquitous in public squares. Rollerskating was a popular pastime during an era of dire economic conditions, with wheels unceremoniously tied with strips of fabric around people’s shoes. The composition is engaging from a purely formal point of view, with the contrast between the solidity of the monument and the sprightly movement of the skater; and the juxtaposition of the dark shade of the figure with the light-hued statute.

The black-and-white photographs on display were taken by Liu in the late 70s and early 80s. These images take the viewer to a past era, albeit one that still lingers in the memory and whose effects strongly reverberate in the lives of many today. Shown in Star Gallery’s new Bauhaus-style space in Beijing’s 798 Art District, the exhibition won this year’s prize for best show at Gallery Weekend Beijing.

An iconic picture of a throng of cyclists streaming down Beijing’s famous Chang’an Avenue near Jianguomen (1981) greets viewers in the main gallery. For decades, bicycles were the officially sanctioned mode of transportation. Now millions of cars share the road with a plethora of mainly shared bikes on the capital’s busy streets. An early sign of warming relations with the west is captured by Liu when Big Bird, a popular character from the US TV series Sesame Street, made its debut in the capital in 1982. Even though the character was probably unknown to most, cheering crowds can be seen surrounding it at the Workers’ Culture Palace. Consumer goods then started to appear, as seen in a photograph of a young man leaning on his brand new motorbike (1982) or in a 1981 image of a newsstand stocked with a wide variety of print magazines.

As life returned to normal in the post-Mao era, people made more time for leisure. Liu’s image of a couple embracing on the grounds of Beijing Zoo (1979) or his photo of a young man posing for a beach portrait in Beidaihe, Hebei (1982) are examples of this new-found freedom. Citizens were once again able to think about personal emotions and a future together, as seen in a photo of a young couple on a bench in Shanghai’s People’s Park in 1978.

Starting in 1980, the systematic removal of Mao portraits signalled the end of the personality cult surrounding him. Liu captures one of those instances in 1981: a group of construction workers take a break outside the National Museum of China in Tiananmen Square during the process of taking down a large portrait of the Chairman. The masterful composition explains why Liu has been dubbed China’s Cartier-Bresson.

Liu, who is a former Time magazine photographer, has captured the zeitgeist of the life of ordinary citizens during those crucial decades in China’s history. As China has turned into an economic powerhouse, Liu’s iconic images constitute an important archive of the era.