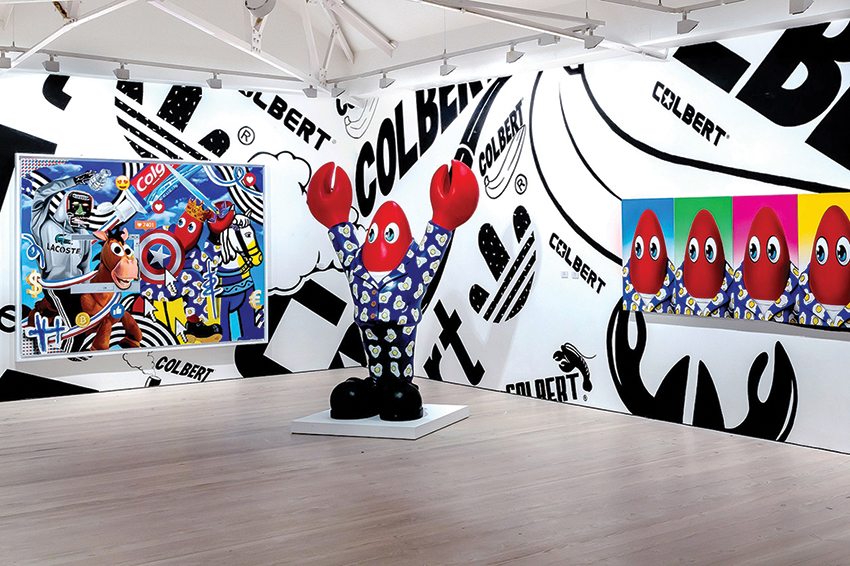 Multidisciplinary Scottish artist Philip Colbert has made the lobster his alter ego. “I became an artist when I became a lobster,” says the artist, who describes his work as “hyperpop realism”.

Colbert’s quirky crustacean was a central figure of Lobster Land, a collection of his large-scale paintings and sculptures at Hong Kong’s Whitestone Gallery, and his first solo exhibition in the city. His images immerse the audience in a landscape of social media aesthetics, including thumb and heart emojis, that are interspersed with art-historical figures. Through his persona, Colbert analyses the visual vocabulary we have acquired by using social-media products that most people depend on daily.

In the 2018 triptych Dream Hunt, which was presented at the exhibition, the lobster is seen trying to ride through a congested digital landscape, vaguely reminiscent of Jacques-Louis David’s Napoleon Crossing the Alps (1801). In Hunt Portrait I (Study) (2019), he sits holding a spear in his claw, on a horse that appears to be formed from abstract lines and colours, reminding us of a classical heroism that was valued in a very different age of art. In Lobster King Magneta (2019), the lobster elegantly holds up a cigarette, as if taking a break from the hyperpop intensity.

Colbert has been called the godson of Andy Warhol; his work confirms the pop-art luminary’s prediction that everyone will be “world famous for 15 minutes”, which social media has now made possible. His dynamic images, inspired by a range of pop artists, mimic the aesthetics of the online world society in which is now immersed.

Colbert’s hyperpop realism continues a dialogue that started with pop art about the changing value of objects, products and images through mass production, which has enabled them to be created at a click; this was addressed by Warhol with his factory-made products, such as soup cans. But in the 21st century, it has led to the commodification of relationships on sites such as Facebook and Instagram, as the media machine turns people, their thoughts and even records of their lives into products and data. The images taken from Old Masters in his work stand out in the digital scramble and urge us to rethink a popular culture shaped by the potent mix of technology and capitalism. Colbert’s message is compelling in this screen-dominated era, when images speak loudest of all.