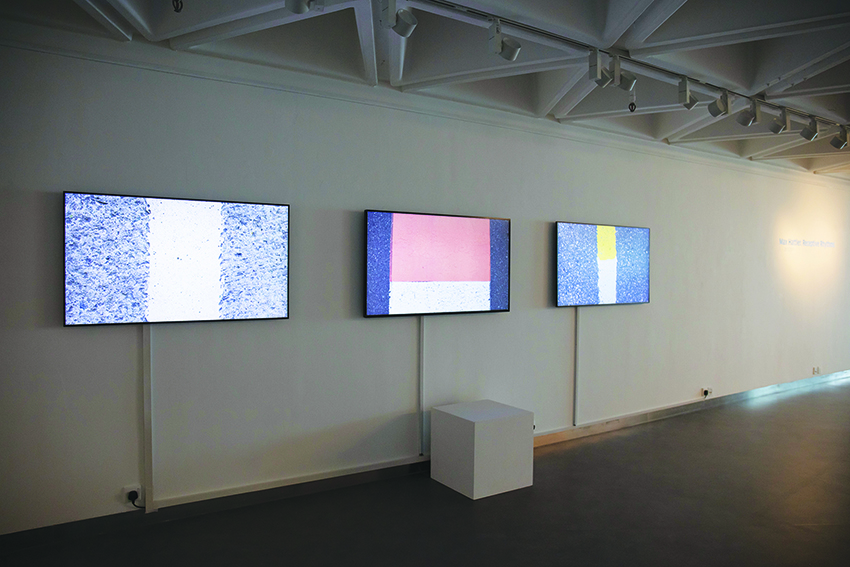 Squares. Circles. Colours. Repetition. These are the words that come to mind as the visitor tries to comprehend the sensory overload unfolding before the eyes in the small exhibition space in the lobby of the Goethe-Institut, located in the Hong Kong Arts Centre. With a focus on the claustrophobia-inducing aesthetics of the high-rise architecture of Hong Kong’s residential estates and the geometrical patterns found on the city’s streets, the show brings to the fore fleeting images from our contemporary existence as city dwellers, and re-examines often neglected, mundane experiences through the lens of abstraction.

Hong Kong-based German video artist and experimental filmmaker Max Hattler explores the interplay between film animation and photographic
image in the exhibition, Receptive Rhythms, for example in the rapid transitions in the video Serial Parallels (2019), highlighting the vertical nature of the architectural landscape found in the densely populated urban metropolis. Moving images of each nearly identical rectangular components, which represent the facades of apartments stacked against each other, create a mesmerising effect reminiscent of the rhythm of never-ending factory conveyor belts going up and down. As the clothing and personal items of thousands of unnamed citizens adorn the windows, such alienating urban aesthetics have become the norm in the concrete jungle, collapsing private and public space.

At another section of the exhibition, the video installation Concrete Abstraction: Road Triptych (2019) zooms into bits and pieces of road signage to examine the topography of Hong Kong’s concrete-paved streets amid the hustle and bustle of the city. As shapes dance across the three video screens, they recall the arrangement of colour field paintings, with blocks of textured colour forming the composition of the pictorial frames.

Juxtaposed against this work is All Rot (2015/19), a two-channel video that at first appears to offer relief by including some greenery, which on further investigation turns out to be artificial as well, featuring a decaying golf course – exactly where perfectly manicured grass is supposed to grow. And so the journey of transforming images of an abandoned golf course into renditions of cosmic visuals begins, as holes in the grass in bright colours and strong contrasts are brought to life so that they look like black holes or planets.