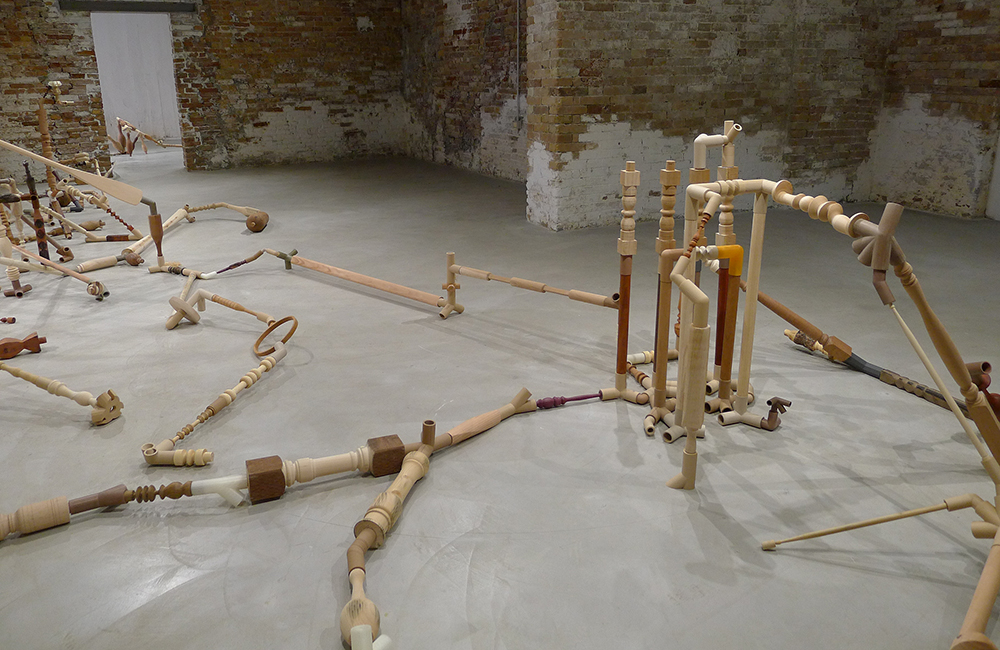 Shirley Tse’s tactile, predominantly hand-crafted installations at last year’s Venice Biennale were a unique offering. Her Stakeholders presentation in the indoor ground-floor rooms and adjacent outdoor courtyard of the three-storey residential building in the Hong Kong pavilion at the Venice Biennale was not whizz-bang technology or smart-idea-as-art; nor was it not big-so-I-must-be-noticed or I’m-backed-by-a-big-gallery. It was refreshingly uncomplicated, using found and natural objects, unconsciously recycled and studiously repurposed. It allowed contemplation and a place for the public to rest and consider: the artist installed a row of simple aluminium bleachers; elevated, rowed seating usually found next to a sports court. Directly in front of these seats was an imagined abstracted game of badminton, Playcourt. Inside, glimpsed from the courtyard through open doors was the sprawling installation Negotiated Differences.

Thinking was encouraged at the Hong Kong pavilion. The Venice Biennale can be an exhausting contemporary-art experience, albeit one in Venice, the world’s most fabulous city-as-art. The intentional provision of an inviting viewing and seating area at the Hong Kong pavilion replicated Venice’s own natural, contemplative spaces: the city’s churches. Few other country pavilions provided such considered space for their audience to appreciate their presentation.

Negotiated Differences is both a departure from and continuation of Tse’s interest in depicting abstractions of networks and systems, previously with iconoclastic, formidable solidity. Her Venice installation is a lighter, open, intricate hybrid structure that links and floats, spans and balances, connects and goads the viewer to follow, immerse and consider the structure’s own labyrinthine tracks. Tse explains that her installation is similar to a rhizome, a subterranean plant system that expands through roots and shoots from its nodes.

In a departure from much of her previous work in plastics, the work predominantly uses wood. The exhibition’s curator, Christina Li, explains that the artist works “with a rotary lathe, an archaic apparatus considered the point of origin for machine tools. The hand becomes the intermediary between machine and matter. In the turning process, Tse works with, rather than against, the grain. Applying force to raw material, in the midst of a volatile sociopolitical reality, is a tactile manifestation of conflict
negotiation; Tse’s approach to material takes into account ethics, acknowledgement and mutual interchange.” The result is turned spindles of different species of wood in different sizes, depicting real and imagined objects – which are linked by 3D-printed connectors, a blend of wood, metal, and plastic. “The lathe work subtracts – objects are formed by carving away from the wood – but the 3D printings adds,” says Tse.

Her rhizome spreads through rooms and embodies the idea that the different species of wood – or, metaphorically, humans or any intricate entity – “have different weights, and the connectors have different
angles. I imagine them having to negotiate with each other to
arrive at a balance. They’re joined in their fight against gravity.” She explicitly clarifies that, “In human terms this interdependence perhaps starts with individuals who realise they have a stake in something once the connections become clear to them”.

Richard Powers’ The Overstory*, winner of the Pulitzer Prize for Fiction in 2019, follows nine characters and their relationship with trees. All trees and other living organisms, the book proposes, are interconnected. Powers’ fiction refers to the Gaia theory, first proposed by chemist James Lovelock, who died in 2019, and microbiologist Lynn Margulis, fictionalised in Powers’ book, that living organisms interact with the world’s inorganic surroundings to form a self-regulating biosphere that maintains the world’s fragile environment for life to be sustained. As soon as I saw Tse’s Negotiated Differences, I thought: Gaia.

As Christina Li indicates, Tse’s installations echo “a volatile sociopolitical reality” and life’s “conflict negotiation(s)” and, while avoiding artificially reconceptualising Tse’s exhibition to fit or not fit into a Hong Kong protest story, Tse’s exhibition in distant Venice coincided precisely with the city’s anti-government protests. Inevitably, her presentation was viewed alongside the myriad worldwide press protest imagery, and the exhibition’s docents would have fielded enquiries about the protests from visitors. Indeed, the protest story is embedded in her two installations. Tse suggests rational negotiation to ensure a healthy system, whereas the Hong Kong protests have been unable to return to a “balance” because the Hong Kong government, under instruction from the central Chinese authorities, has not opened any kind of dialogue with protesters or the city’s pan-democratic representatives; negotiation and “mutual interchange” are sadly absent, as are all the stakeholders. But, before I even entered the Hong Kong pavilion, an inkling of Tse’s exhibition and its message of systemic links back to Hong Kong and mainland China was stencilled on the pavilion’s tatty street-side exterior wall in the single word: “FUTURE?”

Was the question mark a challenge? Was it anticipating a breakthrough from incarceration to liberation? Or was it simply an existential cry against confinement? Tse’s Negotiated Differences offered a surprisingly cogent and appropriate response to the pavilion’s wall graffiti and Hong Kong’s current political crisis: talk and negotiate. Located in the pavilion’s courtyard, Playcourt replicates a common Hong Kong pastime: the playing of badminton, often on the street, alley, beach or park. All that is required for a game is two players, two rackets and a shuttlecock – even a net is not necessary; an imaginary one suffices. Tse’s Playcourt uses the simplicity of the game to replicate her version: using abstract forms, the viewer can circuit the players, equipment and the atmosphere of a game. Adding street authenticity, Tse has rigged in the middle of it all an antenna to capture shortwave radio signals. The resulting radio static, intermingled with recognisable language, offers a touch of humanity to the scene – the abstract sounds of children playing. Overhead, clothes are drying on a line from a window. The scene is straight from Tse’s Hong Kong childhood, a time when children happily roamed the streets and played.

If Playcourt is roughly then, Negotiated Differences is roughly now. Tse has been based in California for over two decades and is also a respected university teacher and writer on the visual arts. She is a member of Hong Kong’s incredibly diverse diaspora, which includes exhibition curator Christina Li. This year’s Hong Kong presentation at Venice has greatly benefited from the diversity inherent in drawing on this community. As Hong Kong’s Nobel Prize recipient Charles Kao said of himself, despite his years away from the city, he is a “Hong Kong belonger”. It’s also proof that Tse’s rhizome is very much alive, thriving and vital. We eagerly await her Hong Kong return exhibition at the M+ pavilion in 2020.

*Peter Hammill, excerpt from Gaia on his album Fireships, 1991