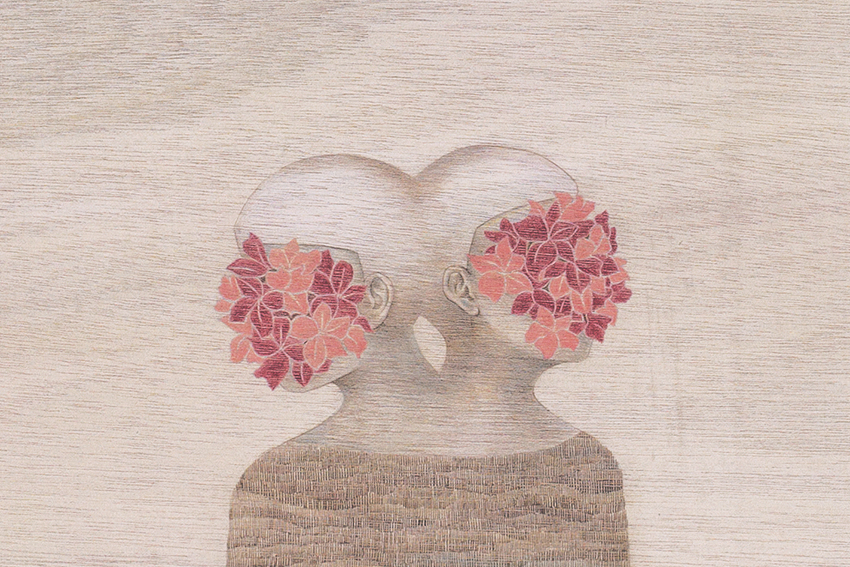 In a city divided by prolonged social upheaval, three young emerging artists from Hong Kong contemplate their place in the world and what it means to belong. A common thread that links the works on view at the exhibition Long to Belong at Contemporary by Angela Li is a hazy sort of nostalgia, which arises from these individuals’ deep, dream-like introspection. Amid the prevailing anxiety that lingers like thick fog over the city’s uncertain future, the show, part of Hong Kong Art Week’s Art Gallery Night, draws a large crowd.

To the left of the entrance, Kwong Man Chun’s oil painting Huang Cen Ling and Tenement House (2017) captures the artist’s journey of retracing his roots while simultaneously juxtaposing scenes of the past against those of the present. He flattens both space and time as they collide into the depiction of a single interior space, visualising his transition from a rural setting in mainland China to urban existence in Hong Kong. The antique furniture housed within a predominantly green space in the background provides a stark contrast with the red bunk bed and patterned tiles in the
foreground. Laden with rich textures on canvas, the painting exudes a surrealist, sentimental quality.

Echoing such architectural aesthetics is fresh graduate Tang Kwong San’s diptych graphite drawing Bedroom (2019). The meticulously drawn floral duvet cover at the centre of the domestic setting gives away the softness of the fabric, yet the monochrome palette and the cool, metallic reflections of the bedposts create a sense of alienation. In the background, the two brown frames highlight the passage of time through the form of a calendar, as well as the distant memory of family in the form of abstract silhouettes of faceless figures.

Nearby, Apple Wong Hiu Fung examines the loss of individuality by placing near-identical figures repetitively within her work. In Behind You (2014), pink and red flowers cover the faces of two anonymous individuals who are connected like Siamese twins: so close physically but looking in opposite directions. At first glance, the natural pattern of the wooden panel on which the figures are drawn in acrylic and colour pencil seems earthy and tranquil. On closer examination, however, in the area that resembles the figures’ clothing, the pencil hatching, in parallel vertical lines that are perpendicular to the horizontal wood grain, captures the jittery feeling of the artist, who attempts to engage in self-therapy through repetitive
mark-making.

As the city struggles to define its identity in the post-colonial era, the next generation of emerging artists are expressing their longing to belong through art.