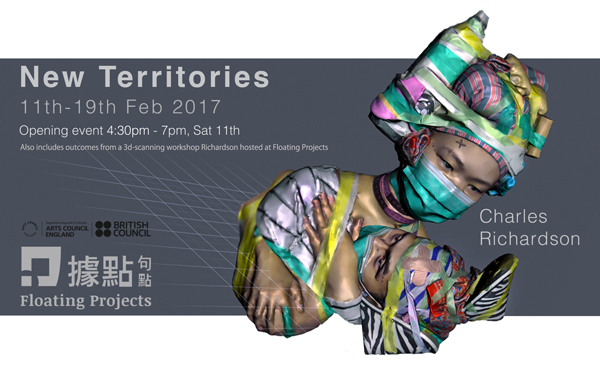 Charles Richardson (Visual artist, UK) will be showing a short film plus students’ outcomes of a 3D-scanning workshop he hosted at Floating Projects opening on
Feb 11 at 4.30pm and ending on Feb 19, 2017. The artist will be present on Saturday Feb 11 for questions, or a chat and a drink, throughout the day.

Richardson’s film/animation will be a partial look at some of the scans and footage from his 6 weeks working in Hong Kong on the Artist Mutual Support Scheme at Floating Projects. He has come to Hong Kong with support from the British Council and Arts Council England. He has treated Floating Projects as his study base, place of experimentation and discussion hub.

Charles Richardson (b.1979, Leek, UK) completed an MA in Fine Art at Slade School of Art in 2014. He was the winner of the 2014 Saatchi New Sensations prize for his video installation ‘Rehearsal’. Richardson had a solo exhibition at Cabin Gallery, London in January 2015, and was included in Daata Editions, LOOP, Barcelona, Spain and NADA, New York, US, 2015; Bloomberg New Contemporaries, World Museum, Liverpool and ICA, London, 2014–15; and Film at Art Basel in Miami Beach, Miami, US, 2014. Recently he has exhibited  ‘HEADBONE’, a solo installation at The Zabludowicz Collection, London, UK, 2015; his first overseas solo show, ‘2nd Place’, Cologne, Germany 2016 and his solo show ‘Displacement Behaviour’ at Exeter Phoenix, UK, 2016. His work is included in the ARS17 exhibition this spring at Kiasma Museum of Contemporary Art, Helsinki, Finland.
charlie-richardson.com