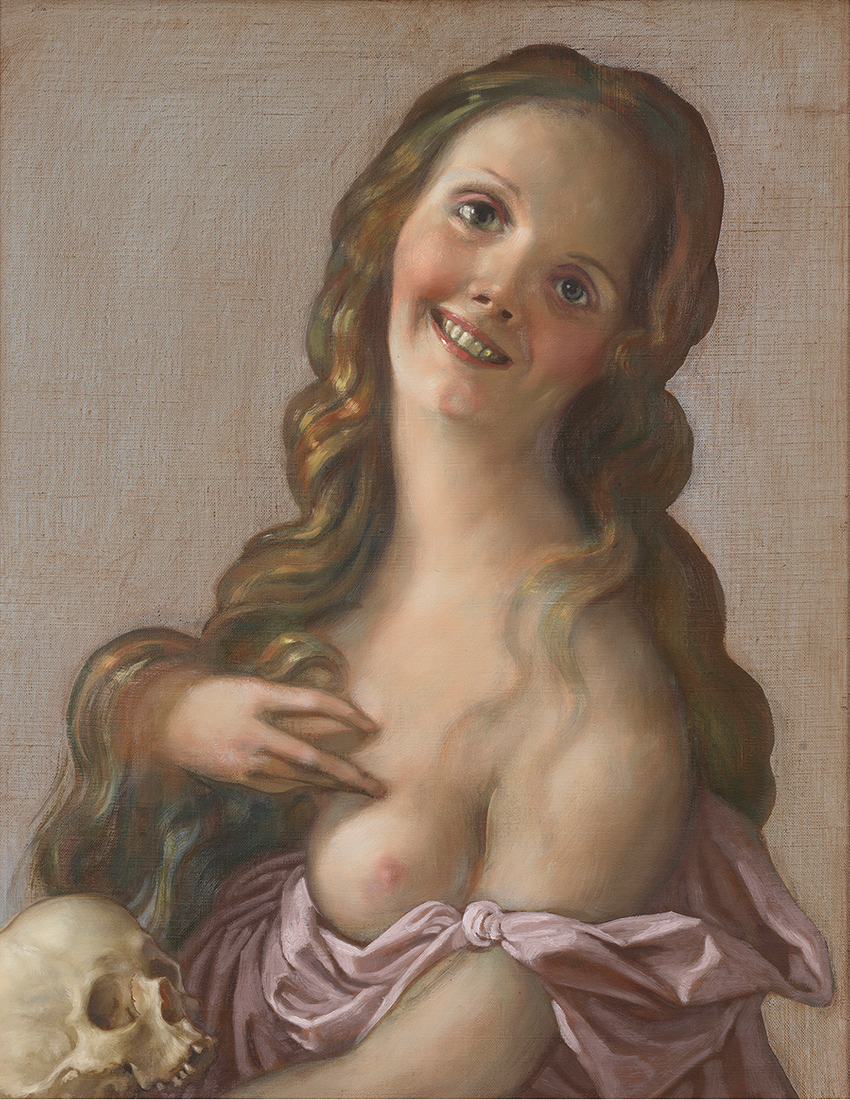 “There is a kind of distortion that happens with adoration,” says John Currin. I’m not sure that’s true at the artist’s first show at Gagosian Hong Kong. Despite the blooming cheeks, perfect brows, rosy lips and impeccable curls, the artist’s portraits are more kooky than sweet. For one thing, the women are smiling with teeth. Showing the teeth used to be a breach of etiquette for the upper class—usually the only class who could afford the time to sit for formal portraits before the modern era. Whereas classical portraits usually feature solemn sitters, the women in Currin’s portraits have either delirious or vacant expressions. One would never expect a half-naked woman who is looking sideways out the frame to pull a sort of semi-insane smile. Nor would one expect a woman decked in a red robe in the style of a saint to be grinning stupidly. In The Philosopher, a woman decked in a brownish-grey trench coat and a bandana holds a wine bottle in one hand while clutching a blue glass with the other. She has a wicker basket hoisted high on her back, and a teeth-baring grin dominates her face. It is reminiscent of a Mao-era propaganda poster.

In Ballade, what looks to be a tender moment—featuring a woman sitting in front of a piano in a pensive mood—is subverted by the flatness of the image. Is Currin aiming for satire? A commentary on mannerism? A clue, perhaps, lies in the artist’s unabashed weaving together of pornographic and religious imagery. And yet, while the skull in Happy Magdalene hints at a memento mori, it doesn’t bear any of the dark, sombre hues that usually characterise the genre. The symbolism doesn’t hold. Currin’s paintings are as slippery as ever.

There is also an eerie lightness to all of Currin’s portraits, from the translucent vessels in Happy Magdalene and Shelley to vacant smiles. It’s as if every one of them could use an additional layer of vanish. They feel oddly empty, as if the artist has so much more to say but somehow barred himself from doing so. They appear to be part caricature, part mid-20th century ad and part art commentary, and yet simultaneously none of them. There is little way of accessing them. It’s clear that Currin is a skilful painter. But that’s all what one can glean from his opaque art: his technical skills and his knowledge of art history.

Currin’s paintings aren’t about the male gaze, nor are they satirical spins on mannerism. Instead they pose the question: how much of a person can you really extract from a picture? Naturally, Currin wasn’t the first painter to question the validity of portraiture. Francis Bacon urged a generation of gallery-goers to look past the surface into the pain, violence and isolation that haunted post-war Britain; and Cindy Sherman’s self-portraits critique the idea of femininity, positioning it as a social construct. Currin’s portraits question the limitations of portrait painting itself: how do you distill something as multi-faceted as a human being into a 60- by 45-centimetre painting?