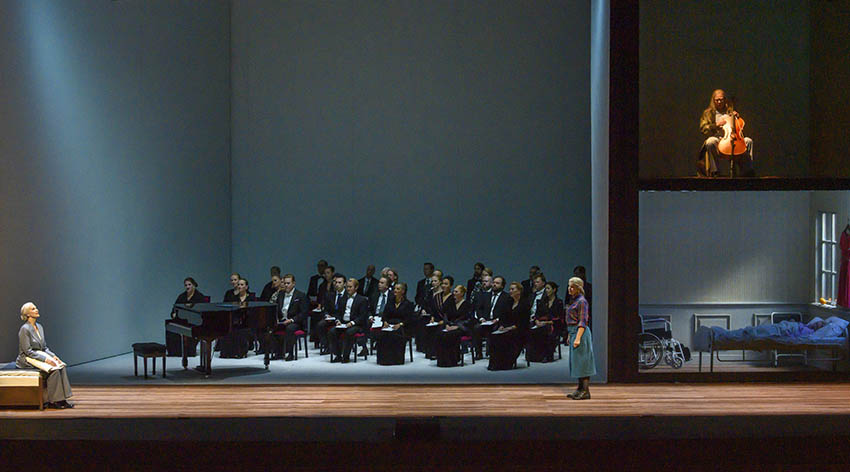 Swedish filmmaker Ingmar Bergman’s Höstsonaten (Autumn Sonata, 1978) made its way to the operatic stage two years ago, when a two-act opera of the same title, with a screenplay-turned-libretto by Gunilla Hemming and a score for solo singers, choir and full orchestra by Sebastian Fagerlund – both Finns who regularly work in the Swedish language – was produced in Helsinki. This production was recently presented in Hong Kong by the government’s World Cultures Festival, of which this year’s theme was The Nordics. On this occasion, the music was performed by the Hong Kong Philharmonic Orchestra, the Malmö Opera Chorus and a cast of Scandinavian soloists, under the leadership of Swedish conductor Patrik Ringborg.

The story tells of the unhappy reunion between Eva, who lives with her husband Viktor in his vicarage, and her visiting mother Charlotte, a successful touring pianist whom she has not seen for seven years. Charlotte’s egotistical pursuits have resulted in a long-standing neglect of Eva, whose love for her mother has gradually turned into a hatred that is now finally vented for the first time.

The set, designed by Frenchman Stéphane Braunschweig, makes full use of the space on the stage, with the vastness of the expanse accentuating the solitude of the few characters and their isolation from one another. The downstage area represents the living space of the house, where most of the action takes place. At the back are three compartments, one of which is a small room occupied by Helena, Eva’s disabled younger sister who, to Charlotte’s surprise, is no longer institutionalised but cared for in this house. Directly above it is another small room, where Charlotte’s late lover Leonardo occasionally appears. Both of these rooms suggest Charlotte’s repressed memories that continue to haunt her. The spacious compartment upstage accommodates the chorus, “an extension of Charlotte’s ego”, as the composer himself puts it, the always approving concert audience that is the source of her self-esteem and largely defines who she is.

In most of this two-hour opera, the characters sing arioso that is not especially melodious or memorable, until Helena bursts into florid, passionate song towards the very end, an indication that, her physical handicap notwithstanding, she is the only one who is not “emotionally crippled” (as Eva says of Charlotte). Elsewhere Fagerlund clearly focuses more on the orchestra, which, despite the sometimes busy activity
on a surface level, typically produces enthralling sustained sonorities, now forceful, now subtly colourful, that either evoke general moods or illustrate the characters’ states of mind, rather than their outward behaviour or actions. Indeed, nothing much happens dramatically in the work, the argument between mother and daughter being just about the only event in it. While this does not automatically mean ineffective opera, splitting this row across two acts, with the second of these resuming just where the first has left off, certainly blunts the inexorability – so powerful in Bergman’s film – with which past wounds are torn open and left to bleed.