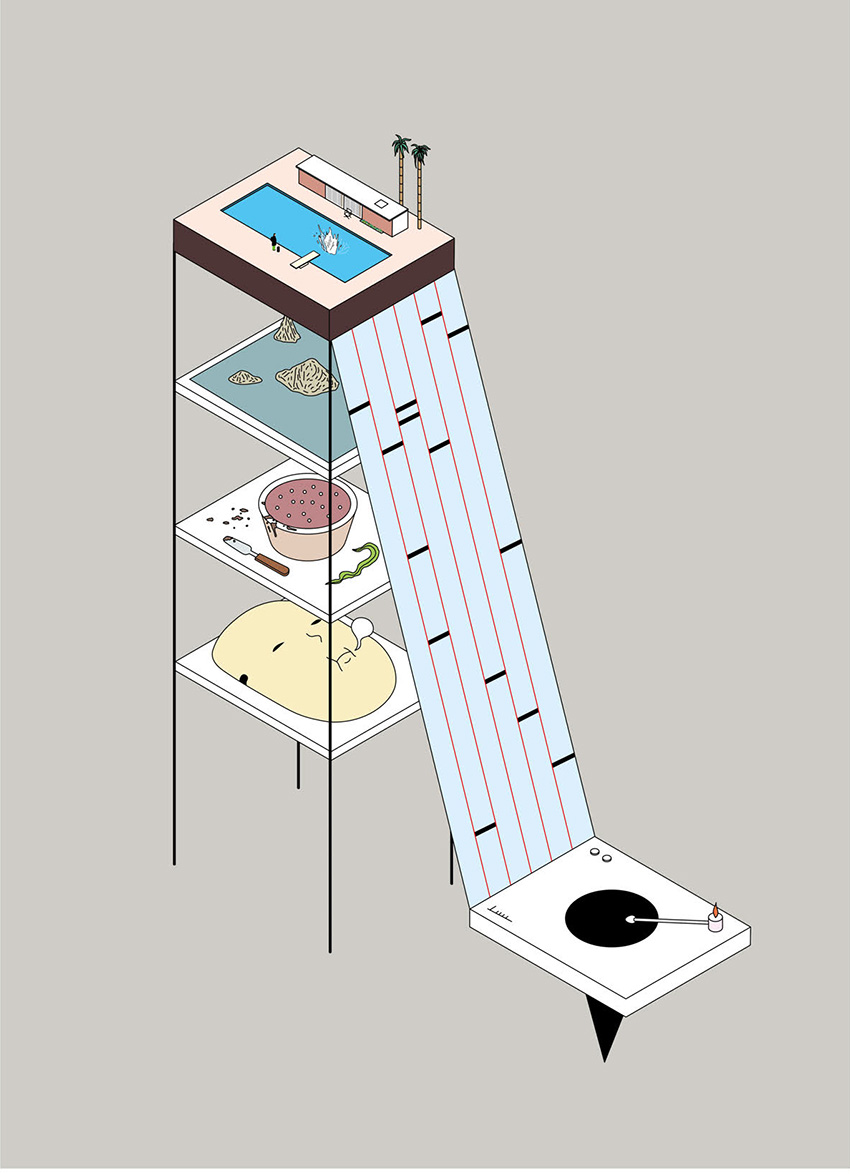 Philosophers, artists and musicians often contemplate the meaning of life, asking why we exist and whether there’s a higher purpose for what we are doing. Aristotle’s well-known reflection on how to live a good life
inspires many people to see the eudaimonia he advocates as something worth achieving. On the other hand, some perfectionists embody Sisyphus in his never-ending quest to pushing a rock up a mountain. While all these manifestations of the desire for self-actualisation can be cliched, the exhibition Normal Life at A Concept Gallery is surprisingly refreshing, as it unshackles itself from the burden of maintaining a facade of such lofty ambitions. Prompting us to consciously re-examine and re-engage with our experiences in daily life, comic artist Justin Wong Chiu Tat’s illustrations offer us an alternative to what he deems “distorted human nature”, which arises from our culture of maximising everything. Instead, he takes a down-to-earth approach, presenting a sincere investigation of what normal life is.

On entering the dimly lit exhibition space, viewers are greeted with framed illustrations hung on the wall, each highlighted by spotlights. Nearby, the artist’s work is projected onto the wall at a much larger scale, allowing viewers to take a closer look at the intricate details, as text and patterns move across the animation of the cityscape he created. For many citizens in Hong Kong, the past year has been surreal in the real world, as unprecedented changes in society have unmasked the cold, alienating reality of urban existence. Rather than depicting snapshots of our lives, Wong chooses to illustrate his thoughts through symbolism in a calm, detached, architectural manner, such as in his work David’s Paradise (2020). The flat colours of the works on view in the exhibition recall Michael Craig-Martin’s line drawings of ordinary objects, yet Wong’s art evokes a dream-like quality, in a radical departure from most people’s definition of normal. The result is that there are infinite interpretations of his work, depending on the viewer’s background and experiences.

One particularly eye-catching piece is Whispering Machine (2020), which depicts a gramophone, rendered without shading, with fence-like vertical structures in front that evoke a sense of isolation and entrapment. It is implied that sound is being emitted an audible level, with simple curved lines in projectile motion emerging from the speaker. Paradoxically, the title suggests the notion of secrecy, as if the machine’s voice is not being heard. Meanwhile, in monochrome work The Pool (2020), the artist sketches in a minimal style what people encounter during their mundane experience of being at the swimming pool, with special attention paid to the patterns, textures and figures from aerial view and at eye level in the same pictorial frame.

With the artist’s background as a comic creator, this exhibition offers a multi-faceted exploration of life itself, and how the narrative of life unfolds. As much as people yearn for a normal life, perhaps the best way to begin is by focusing more on the details around us, the way the artist captures them in his art.