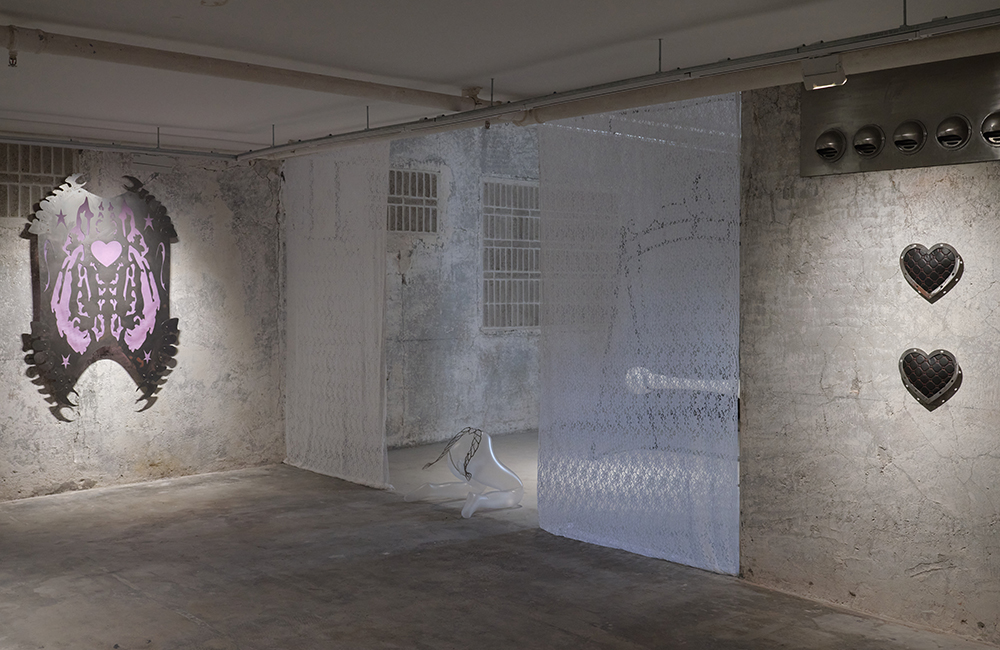 Even in the most diverse communities, clusters of people must share culture, space and experiences for bonds to form. As individuals mingle and interact with each other, their identities are sculpted by external forces. We may conform to norms established by others, or rebel to smash the status quo and shatter homogeneity.

The show started with RUSH (all works 2022), a digital print that spans more than 5.5 metres to present an orgiastic mishmash of sparse references pointing in different conceptual directions, with a couple of visuals that thread through other works in the show – flames and hearts.

More interesting was the physical presentation of RUSH at PHD. A shallow bed of dirt ran along the wall on which the print hung, with several green plants situated in small mounds of soil. Their leaves had holes that grew larger each day – the result of irrigation using the chemicals in Rush, a brand of poppers that was part of the 1970s disco scene and the rave scene in subsequent decades.

Elsewhere in the “village square”, Talisman for Recreational Arson showed Chen and Wong seated on a round mattress, their backs to the viewer, both calm as their bodies are engulfed in flames. The bed depicted was discovered by the artists in a dilapidated building, retrieved, then set alight as part of the first artwork they made as a duo. The fiery image was an oil painting on canvas set inside an oversized, heart-shaped locket. The work was laid on dirt, which was explained as a metaphor for Chen and Wong’s relationship and the mourning of past selves.

The trail of hearts continued in Amyl Liminality, a sculpture in which lace trim adorned black plastic automobile fenders, suspended from a heart-shaped flange rusted using Rush. The fenders appeared in a yonic arrangement, their feminine visual connotations mingling with the typically masculine associations of car culture. Plus, the word “lace” phonetically sounds like Taiwanese slang for “lesbian”, adding queerness to the references in the work.

At this point, the presentation already felt overextended, but the artists had more to cram in. Virtue Village also attempted to unpack their interpretations of transhumanism in Village Porn. They spread themselves thin in some of these pursuits, but think of the messiness of personal expression as a genuine attempt to present difficult themes. In the centrepiece of the show, Machinal Dysphoria, part of a motorcycle engine block is bound in pink shibari rope (courtesy of shibari practitioner Aka Chow) and suspended from the ceiling. Nearby, inflatable, half-bodied sex dolls that the artists call “village angels” bow in prostration to the bound mechanical unit, suggesting reverence for chaotic transformation where the line between machinery and human flesh is erased, but this all felt strained rather than syncretic.

Elsewhere, a mythical yarn was carried forward in Fistful of Faith, an acrylic painting that was inspired by a dream Wong had, in which he was being fisted by a giant scorpion. This led to a search for meaning, with Wong wading into the mentions of scorpions in Hindu and Buddhist cosmology. A companion piece, Fistful of Faith (Hard), was a wall-mounted artwork consisting of purple latex and laser-cut iron (again rusted with the chemicals in Rush), invoking scorpion pincers, a hard shell and tails, a heart symbol embedded within a symmetrical pattern that reminds the viewer of a Rorschach test.

The plastic organism is a nod at writer and curator Paul B Preciado’s Anal Terror, in which he wrote, “When we are born, we are a patchwork of liquids, solids and gels covered by a strange organ whose extension and weight is greater than that of any other: the skin. … This tegument ensures that all of it remains contained … leaving two muscular orifices visible: the mouth and the anus. So there are no differences, then: we’re each a flesh ribbon that, due to the law of gravity, begins in the mouth and ends in the anus.” Preciado continues on to describe the symmetry of the mouth and anus.

Whether in the heart shapes that rear up again and again in the artists’ “village” or in the conceptual citation of Preciado’s text, symmetry runs throughout the show, as seen in the overall formation of works such as Spirit Edging, Amyl Liminality and Fistful of Faith (Hard). There could have been space here to form interpretations based on the observation that symmetry violates nature, but the show already felt overworked, themes and references not quite cohering.