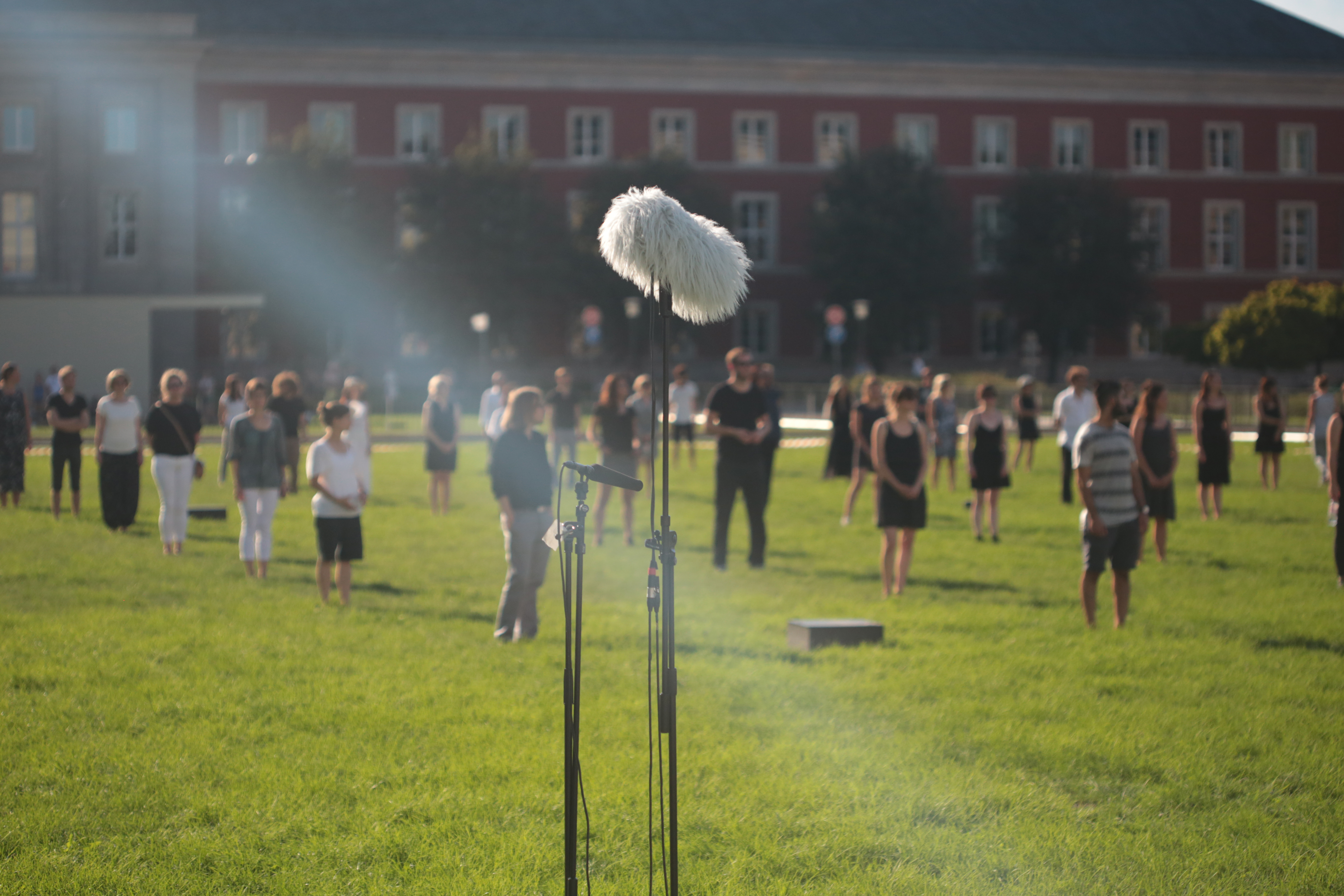 Cities buzz. Like giant batteries, they store energy and release it; their air is electric. They are fuelled by the intangible networks, both human and digital, that run tirelessly through their tall skyscrapers and narrow back alleys. In an attempt to reveal these imperceptible forces that make up urban environments, Human Vibrations, Hong Kong’s fifth Large-Scale Public Media Arts Exhibition, explores the relationship between technology and city dwellers. Through site-specific public works by eight new-media artists, both local and international, the exhibition looks on notions of time, transience and ephemerality, as well as how people relate to each other and to their environment.

Taking centre stage in the exhibition is Fly High – Time Flies (2016) by Laurent Mignonneau and Christa Sommerer, in which swarms of flies smother the ICC’s facades as they would cattle on a hot summer day. The randomly generated mass aggregates, crowds the building on all sides and dissipates again. The tower, suddenly filled with life, becomes akin to the city it looks over, bustling with millions of inhabitants scurrying through its streets. While arresting in its beauty, the image is equally unsettling, the comparison between flies and humans an uncomfortable one.

To fully grasp the work’s significance, the flies must be understood in all of their literal and figurative meanings. In contrast to the work’s visual dimension, the title suggests the rise of the individual: fly high – succeed and be prosperous. As such, the ICC, one of the world’s highest towers, serves as an appropriate setting for the work. Reaching the top of the ICC equates to reaching the top of the world; but the title also reminds us that “time flies”. Success is fragile, perhaps even futile – it could all suddenly be taken away. Flies, after all, die only weeks after being born and are often associated with decay, Sommerer points out, explaining the reasoning behind the somewhat ghoulish choice of motif.

Engaging more directly with the public, the duo’s second project for the show, People on the Fly (2016), appeals to our playfulness and love of interaction with technology. Through sensors, the interactive installation creates large-scale fleeting portraits of passers-by, again employing digital flies. Purposely impermanent, the silhouettes remain in constant flux as the insects flutter in and out of line. Step out of sight and your portrait disappears.

Another play on words, People on the Fly implies both the transience of city life and the ephemeral nature of our existence, notably of beauty. “Similarly to Narcissus,” says Sommerer, “many people need a constant metaphorical mirror to confirm their value in society.” The numerous flies that compose the portraits stress the inevitable truth that the self is defined by others.

The relationship between the individual and the many lies at the heart of Isaac Chong Wai’s video performance, which records inhabitants from Hong Kong, Gwangju in South Korea and Wuhan in China describing their future, or at least what they imagine it will be. The participants stand in formation and recite their stories simultaneously. All the voices combined become One Sound of the Futures (2016), a dizzying audiovisual composition that shares all narratives but favours none. Each voice bears the same weight in the soundscape.

Every narrative is necessarily linked to its city’s history, culture and language, but the work in its final version disregards idiosyncrasies; these are reduced to indecipherable noises. From the synchronic aspirations of the many, we are left with an unintelligible hum: echoes of imagined futures; audible vibrations of a collective dream. Conflating the past, the present and the future, Chong Wai hopes that in a few years’ time the work will reveal the historical significance of the period in which it was created to viewers.

Caught up in our frenzied daily routines, we leave little time and space for social exchange beyond our devices. Displayed as a countdown on the ICC, Our 60-Second Friendship Begins Now (2016), by Jason Lam and Sampson Wong, invites us to pause for a minute and interact with others, be they friends or strangers.

The work pays homage to the famous scene in Wong Kar Wai’s Days of Being Wild (1990) in which Yuddy (Leslie Cheung) insists that Su Li Zhen (Maggie Cheung) stare at a clock for a minute with him, thus creating a memorable connection between them. This period of time, though very short in real life, is endless on screen, affirming the lasting effects of the act. This single, elusive minute has the power to kindle a meaningful relationship that would otherwise not have existed. The work’s effect is all the more poignant for its formal simplicity. In the fast-paced, screen-dominated environment that is Hong Kong, there is a pleasant irony in having a digital clock inspire human interactions in an analogue world.

For better or worse digital technologies are a reality of our time, and it is a pleasure to see the new-media works in Human Vibrations both highlight their flaws and affirm their positive effects, as innovative systems for us to engage with each other and our urban habitat. While immersing us in digital universes, they effectively demonstrate the possibility of living in the moment, shaping our own future and interacting with each other beyond screens. Through exposing the intangible energies of cities, Human Vibrations comes a step closer to elucidating what makes cities what they are: dazzling, mesmerising and electrifying.