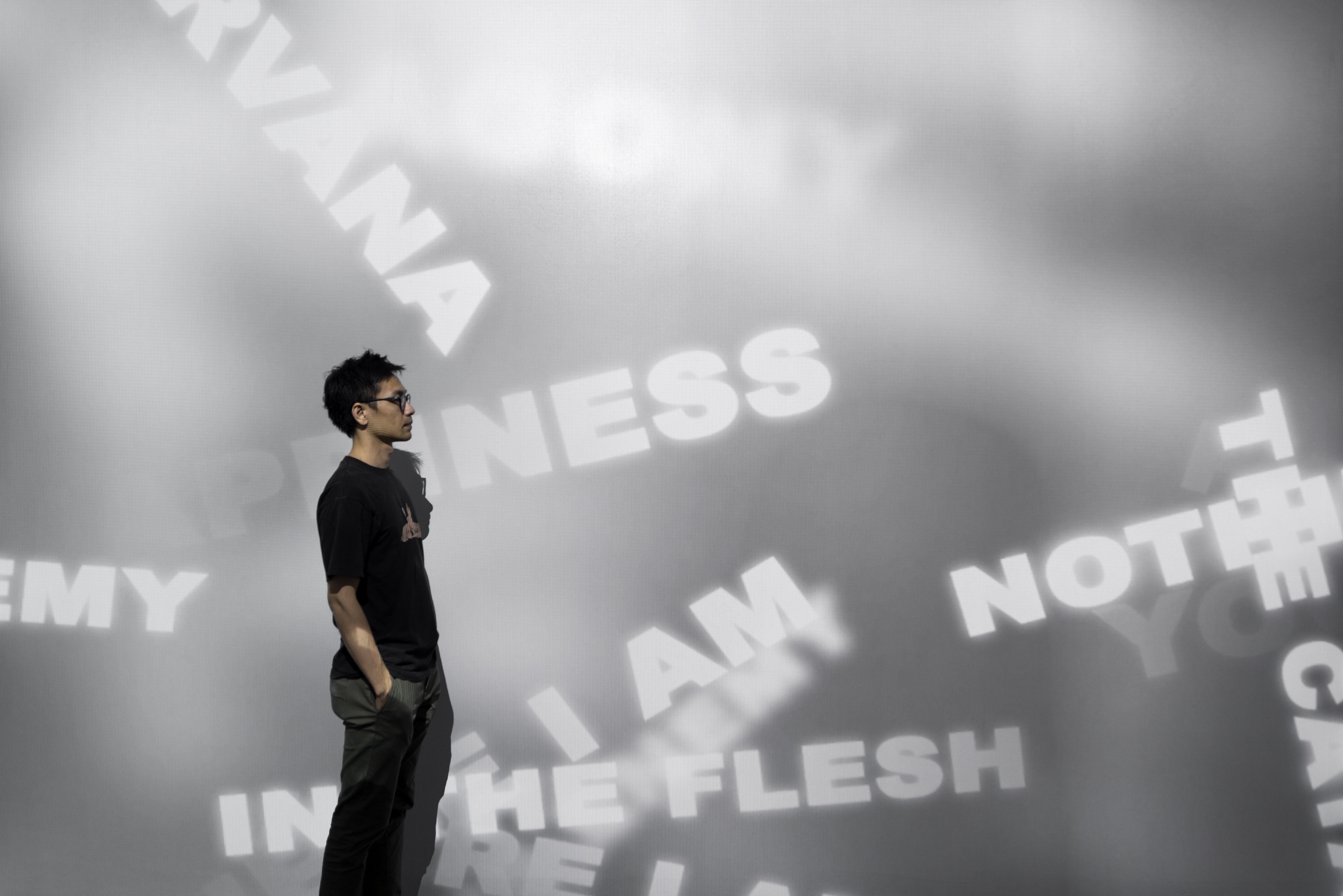 For someone who has built an art career out of them, Tsang Kin-wah is a man of very few words. Bookish, with thick glasses, the softly-spoken artist measures his words carefully, and it’s hard to hear him over the sounds of drilling and hammering in the newly opened M+ Pavilion. His exhibition, nothing, the pavilion’s inaugural show since it officially opened in July, is less than two weeks away. The space, situated on the Hong Kong harbour with a view of the vertical concrete-and-glass skyline, is still a construction site, with cranes encircling the building.
Electrical cables snake their way across the exhibition space inside, and new metal-veneered columns have sprung up like towers in a futuristic city for the site-specific show. Soon the inside of the pavilion will be awash with glowing words and sound as the artist turns it into a walk-in installation.

Thrust into the spotlight when he won the Sovereign Asian Art Prize in 2005, Tsang’s immersive text installations have since wound their way across the walls and floors of galleries, museums and biennales the world over. Among his trademarks are screen-printed text wallpaper works heavily influenced by the 19th-century Arts and Craft movement and William Morris’s lovely repetitive floral prints. The wallpaper looks pretty enough to decorate an overstuffed Victorian-era drawing room, but a closer look rewards you with a slap in the face. The swirling floral patterns are made up of a litany of profanities – a punk gesture dressed up in Laura Ashley tea dress. Marrying the beautiful with the obscene, the sacred with the profane, Tsang’s works explore sex, religion, politics and philosophy. The outpouring of obscenities throbs with existential angst and taps into social and cultural discontent and unease. ‘FUCKALLTHESWEETWORDS’, ‘FUCKMYSTUPIDMIND’ and ‘FUCKINGSHUTYOURCUNT’, they scream.

In the beginning the stream of abuse and invective was Tsang’s way of dealing with the isolation and exclusion he had felt in 2003 when he was alone and in a foreign country for the first time, undertaking a master’s degree at Camberwell College of Arts, part of the London Institute, now University of the Arts London. The artist has voiced his frustration and shock at experiencing racism and being verbally attacked on the street. “I was quite angry. I felt a certain dislike and I didn’t belong,” he said. The text was a direct way of venting his frustration, and also reclaiming control where once he had felt powerless. Eventually text would also lead him to navigate a spiritual and religious crisis; religion is a theme that has cropped up repeatedly during his career.

Raised in a Buddhist household, Tsang converted to Christianity in secondary school in Hong Kong, but over time he grew disenchanted with his adopted religion. Spiritual and philosophical texts, particularly the works of German existentialist philosopher Friedrich Nietzsche, would lay the foundation for many of his future works, as Tsang began experimenting with mixed media in a departure from his static text works. Text was projected; it glowed, moved and danced, sped up and slowed down in a mad choreography, against a soundscape of often indefinable white noise and familiar nature sounds. The works became more reflective, less explicit and confrontational.

“I think as I’m getting older that’s changed a little bit,” he says. “When I was younger I used a lot of swear words. It was a direct way of expressing my anger and feelings, but after a certain period of time I found that maybe I was not getting so angry any more. At the same time I find that when I use [only] text it’s somehow a little too direct. So I’ve changed that a little bit by also using images and sound.”

Representing Hong Kong at last year’s 56th Venice Biennale, Tsang’s exhibition The Infinite Nothing thrust audience members into a pitch-black room where dramatic swirling coils of projected words from Nietzsche’s The Gay Science, which pronounces the death of God, wound their way down the walls and floors, as well as the bodies and faces of the audience. The installation was a marriage of text with digital technology, a synthesis of visuals, sound and philosophy.  It was less direct than some of his other works, perhaps, but the dizzying storm of text on a continual loop, washing over viewers and set against a soundscape of cries, was an overwhelming experience. It was an atmosphere fraught with tension.

“Are we not straying as though an infinite nothing? Do we not feel the breath of empty space?” asked the text – and space is what Tsang gives the viewer: space to meditate, feel and think. The text was accompanied by sounds of the rush and flow of water, soothing but also at times aggravating, as if the words had taken on a life of their own, transforming into a torrential river that carried the viewer along through the pavilion. In Tsang’s work, the viewer becomes immersed in the installation – implicated in it. His installations are mindscapes, provoking an emotional and intellectual response from a physical experience, and triggering an internal monologue about existence.

nothing expands on Tsang’s Biennale show, continuing its examination of existence and eternal recurrence – the idea that the universe is happening again and again over infinite space and time. Human existence is presented as circular and repetitive, ideas echoed in the Buddhist philosophy of reincarnation and karma – important influences on the artist. The exhibition is divided into three interconnected spaces. Viewers enter the main pavilion and emerge into a courtyard where a solitary tree stands, suggestive of the Bodhi Tree, or wisdom tree, under which the Buddha was said to have gained enlightenment. They then head to an enclosed room, and then back to the beginning again. The configuration is intended to mirror the cyclical nature of life, and our inability to escape our fate.

Tsang’s installations can provoke feelings of emptiness and loneliness; self-reflection is a solitary endeavour. Tsang guides the viewer on a journey of enlightenment through self-discovery, but it is one that finally arrives at emptiness. His works ask the viewer to slow down and stand still for a moment, something all too often disregarded in today’s fast-paced art market, dominated by fairs and spectacle exhibitions. As M+ exhibition curator Stella Fong says, “The exhibition is like a movie. It takes time and there are so many projections to take in. You can’t just rush around the show. You have to try to immerse yourself in this environment.”

The show is a projection of the artist’s inner world and emotions, bringing together diverse artistic influences, but ultimately it is a self-examination and reflection on the meaning of life. Like a Rorschach test, “every audience member will see something different”, says Fong.