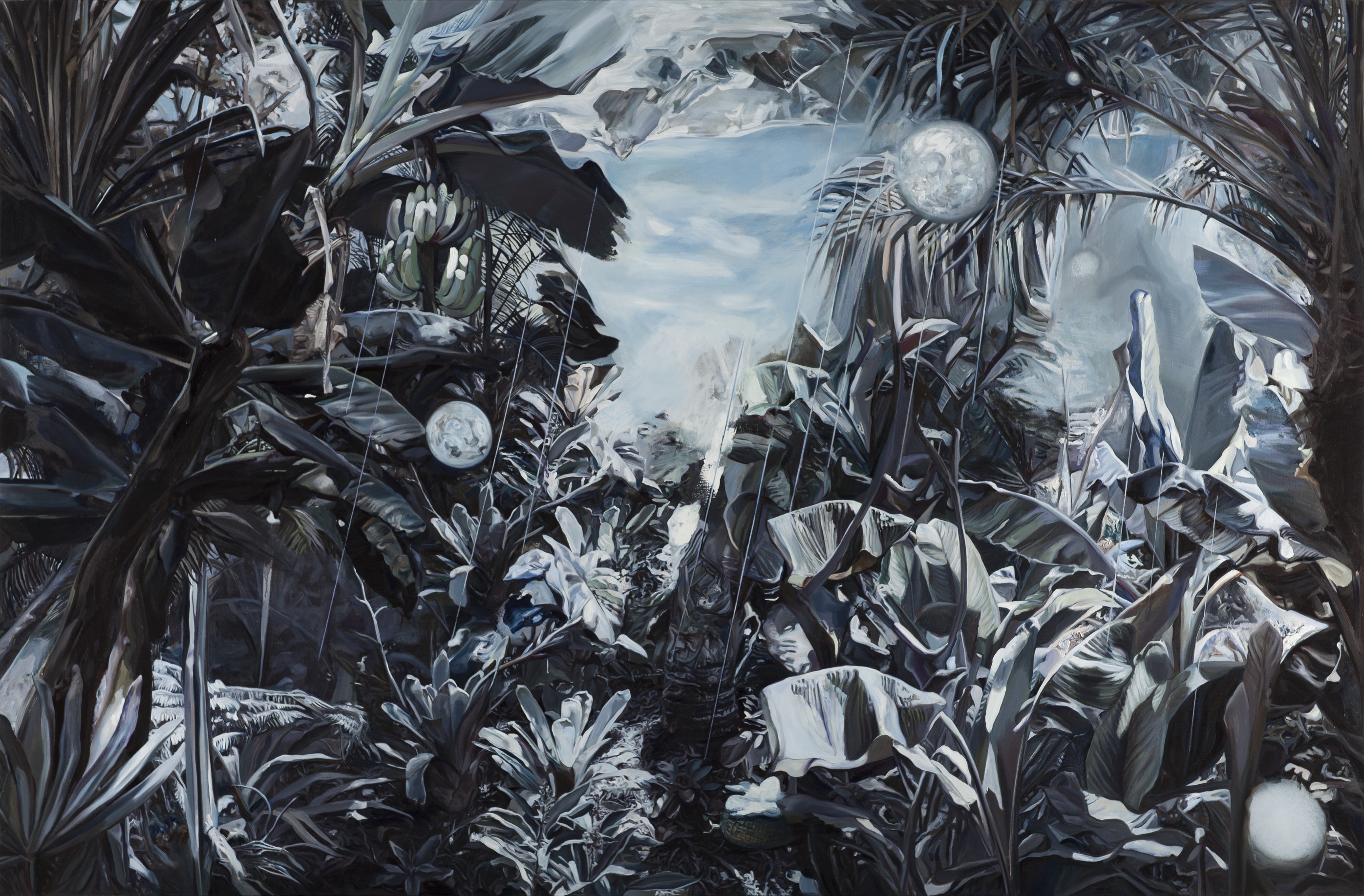 There is a place with four suns in the sky – red, white, blue and yellow at Edouard Malingue Gallery

The disembodied head of Mickey Mouse floats before the striated background of a canvas alongside the head of a putto and several archeological finds. But Wang Zhibo isn’t another Chinese contemporary artist dredging up western iconography in an attempt at ironic kitsch. We’ve moved on from the Maos and the Marilyns and Mickeys, haven’t we? Let your eyes move across the canvases of the dozen paintings hung around Edouard Malingue Gallery and a more sinister narrative emerges.

Part of China’s post-’80s generation, Wang gained attention for her unreal, isolated, dystopian landscapes, denuded of humanity. This time, in There is a place with four suns in the sky – red, white, blue and yellow, a title borrowed from Carl Sagan’s 1973 book The Cosmic Connection: An Extraterrestrial Perspective, there are figures everywhere, but they are disembodied, decapitated, their faces obscured, juxtaposed with incongruent images.

The paintings flit between detailed figuration and abstraction, and between polished and sketch-like brushstrokes. References from art history are threaded through them. Small coiffed or wrapped, decapitated heads sit like bulbs of garlic among an arrangement of fruit and vegetables in macabre still lifes that draw on 17th-century Dutch works. Rather than being symbolic of death, Wang’s works hint at violence and uprisings.

In We leave that to the people who wear them (2016), a tribal mother, her face obscured by an ornamental cage of ribs, sits holding a child amid scattered bone fragments and a severed leg, while a pair of toucans perch on a tree in the background. The composition is suggestive of the Madonna-and-child paintings of the Renaissance, but with a dash of cannibalism and a throwback to civilisations of another time. A grisaille jungle landscape, Rise, Fall (2016), featuring three moon-like orbs across its surface, a phantasm of a mountain floating across the top of the frame in place of clouds, depicts another world entirely, in a stylistic marriage of brutalism and Henri Rousseau. There is a sense that something sinister has just happened or is about to happen in Wang’s works; a feeling of unease trickles through the flat surfaces of the canvases.

Like Wang’s earlier paintings, this exhibition depicts constructed worlds. Juxtaposed images bleed into one another, as if memories and impressions have been culled from anthropology books and documentaries, museums and the internet, and have materialised into visions on canvas. Inner and outer worlds collide and blur, transcending time and space, resulting in the eradication of historical reality or rationality. Objects and scenes are thrown together incongruously. Wang’s paintings are fantastical dystopian dreamscapes: collages of the past, present and future filtered through a Ballardian lens.