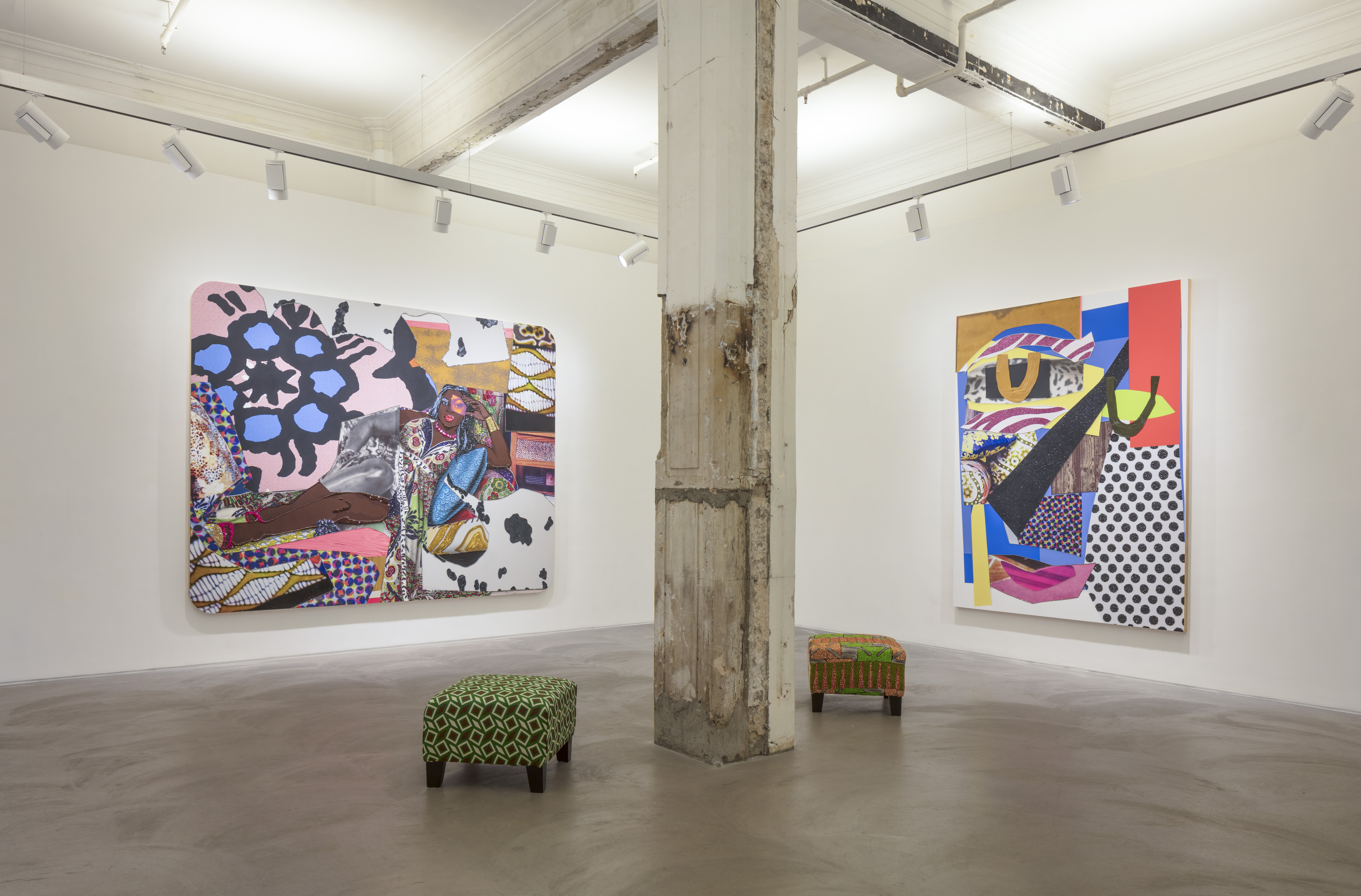 the desire of the other

In 1994, while an art student in Portland, Oregon, Mickalene Thomas chanced on artist Carrie Mae Weems’s iconic Kitchen Table Series hanging in the Portland Art Museum. The series of black-and-white photographs depicted Weems at her kitchen table playing cards; smoking; sitting with her lover; reading with her daughter; doing her make-up. The artist played out these roles of mother, lover, friend and daughter, photographing herself over a year from 1989-90. They are mundane daily activities, but crucially they represent the intersection of art and the political, exploring power relations and cultural and racial identity through the portrayal of black women. “It was the first time I saw work by an African-American female artist that reflected myself and called upon a familiarity of family dynamics and sex and gender,” Thomas recalls. The historically significant series paved the way for generation of female artists to reimagine and represent themselves through their work. Among them was Thomas, who found the inspiration she needed to dedicate herself to becoming an artist. “It ignited a new awareness and willingness to create in my own voice; it made me aware of how you can use your experiences as a person and make art out of it.”

Twenty-two years later, New York-based Thomas has blazed a trail as a multidisciplinary artist, known for her large-scale, multi-textured, rhinestone-encrusted paintings of domestic interiors and portraits. She has picked up where Weems left off, creating works that play with representations and perceptions of black femininity, and that dispel and deconstruct myths and notions of beauty, race and sexuality. Her collages, photographs and paintings – painted in lashings of bright, bold acrylic and enamel, and incorporating a cacophony of clashing prints – are richly layered and seductive. They feature sexy brown-skinned odalisques, sometimes in the classic poses of a reclining nude, other times sitting brashly wide-legged, all bare thighs, supple flesh and big, curly hair against a collage of colour and exotic prints. Her models are kittenish vixens, vamps dressed in retro, gaudy outfits reminiscent of blaxploitation heroines like Foxy Brown and Cleopatra Jones. But at the same time that they seduce us, the women in her paintings hold us at arm’s length, freezing us where we stand with a glance that is neither inviting nor in the least permissive. The women themselves aren’t passive subjects, looking coquettishly away and allowing the viewer to objectify them and to reduce them to objects of desire. Her women gaze defiantly back. They are bold, powerful, unafraid and in control. If ever there were paintings to exemplify our current political and social climate, it would be these. Pussy grabs back.

In her seminal essay Visual Pleasure and Narrative Cinema, film theorist Laura Mulvey writes: “In a world ordered by sexual imbalance, pleasure in looking has been split between active/male and passive/female. In their traditional exhibitionist role, women are simultaneously looked at and displayed, with their appearance coded for strong visual and erotic impact so that they can be said to connote to-be-looked-at-ness.” The male gaze – derived from a male audience and created by male artists – was intended to disempower women, to devour and objectify them. Thomas subverts this. In Thomas’s work power lies with the sitters; their sexuality, their desire, their gaze, is not directed at a male, as tradition would demand, but at a woman: the artist herself. These are paintings about the female gaze and the power it holds. They force the viewer to see and acknowledge the subject, the black female, and to look into her rather than just at her.

The paintings are based on photographs taken in the artist’s studio, using a close circle of friends, lovers and her mother as models and muses. They are women with a “certain confidence and self-awareness” who challenge representations and stereotypes of black women as the subjugated, exotic, looked-at other and call into question their sexualisation and exploitation. “The women in my work throw up a pretty formidable barrier to the cliches traditionally laid on women, especially black women in art,” says Thomas. “They look right back at the viewer with self-knowledge, demanding to be seen while creating the impression of seeing right through the viewer.”

Thomas photographs her models against styled backdrops that reference 70s interiors, drawing on her own childhood. Animal, floral and African-print fabrics, vintage furniture, big afros, loud make-up, vinyl records by Diana Ross and Stevie Wonder and a riot of explosive colour painted on wood panels all compete for attention in her bright, bold paintings. The composition of each painting is carefully and laboriously constructed, with patterns, textures and colours layered one over the other like a funky retro collage. The rhinestones and glitter that have become signatures of Thomas’s work – used to shade lips, hair and nails in a pointillist style – draw attention to themselves as decorative elements, but they are also symbols and signifiers of femininity, of glitz and glamour, that serve as metaphors for artifice. Through an exploration of artifice, she challenges common definitions of beauty, and historical and artistic representations of women.

Beyond providing an aesthetic and personal point of departure, the 70s were also a time of social and political transformation. They ushered in an era of new social awareness within both the feminist and the African-American liberation movements. They also gave birth to the Black is Beautiful movement, which challenged and redefined traditional standards of beauty and which is central to Thomas’ work. “By selecting women of colour, I am quite literally raising their visibility and inserting their presence into the conversation, portraying real women with their own unique history, beauty and background,” she says. “I’m working to diversify the representations of black women in art.”

The photo shoots with her models are always collaborative. Thomas refers to them as her muses, but these women are more active and empowered than a traditional muse who provides inspiration and companionship to a male artist. “I prefer to relinquish some authority to my muse in hopes of allowing her to own the space,” she says. “By bringing real, genuine aspects of herself, I want the unique beauty and individuality to manifest. They’re not just anonymous props to my work, but rather real women who insist on their presence with their directness and gaze.”

The installations created for each shoot act as backdrops for the portraits like a theatre set for an actor. The models are styled in poses and tableaux that draw from the canon of western art history – paintings are titled after the models or after historical paintings such as Watteau’s La Leçon d’Amour, Balthus’s The Guitar Lesson and Courbet’s L’Origine du Monde, while also integrating Yoruba art and other aspects of African culture in the bold colours, African-print fabrics and head wraps of the sitters. Thomas’s interest in re-appropriating and referencing iconic modern western paintings stems from a desire to reclaim and reinterpret these canonised images of beauty. By inserting them into the western art-historical canon, black women are given visibility, provoking a conversation about the representation of the black female body in popular culture, its absence from that canon, and how much this visual representation in art has evolved over time.

Thomas is presenting two bodies of work – one figurative and the other abstract – for her first Asian solo exhibition, the desire of the other, at Lehmann Maupin Hong Kong. The exhibition explores and expands on the themes and ideas that have informed the artist’s work for the past two decades, tackling empowerment, identity, beauty, gender and sexuality. Thomas brings them all together harmoniously into lush, sensual, bold paintings that challenge stereotypes and subvert tradition. But she also wants audiences to experience the transformative power of her art. “I’m hoping someone standing in front of my work might get the same feeling I got when I stood in front of the work of Carrie Mae Weems: a sense of possibility and accessibility,” she says. “Just as my muses insist on their visibility and identity, I want my viewers to feel present with fierceness and boldness. I want them to claim their rightful space in the world.”