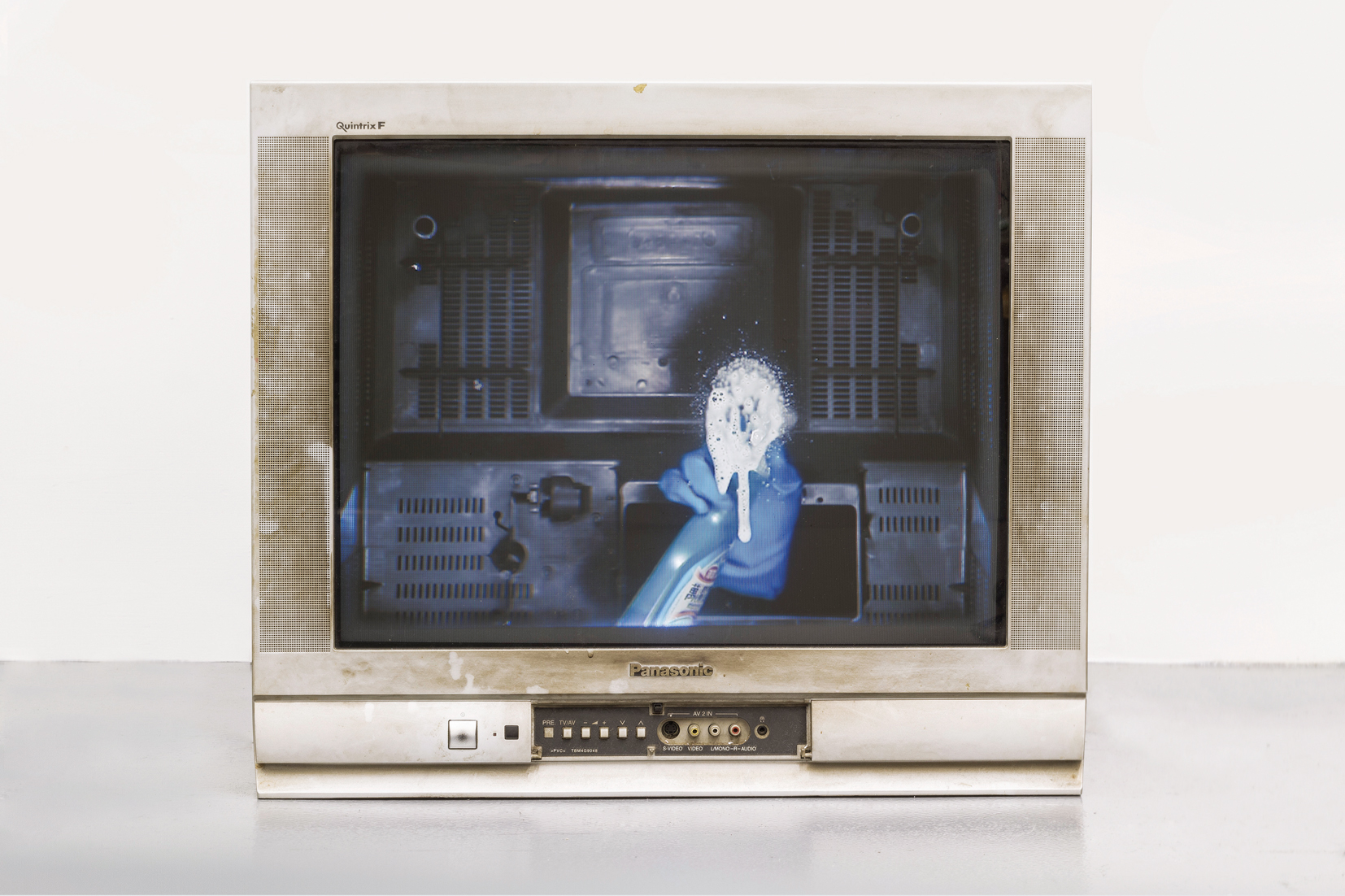 For his first solo show in Hong Kong, Eason Tsang Ka Wai continues and deepens his exploration of cityscapes and local architecture, playing on scales and perception to question the place of human beings in our contemporary urban society. With more focus on the details of daily life, coupled with hints of humour, and with a broader scope of media involved, the exhibition appears as a rich but uneven experimental platform.

Curated by Leo Chen Li, the exhibition space is divided into two parts representing day and night, or external and inner spaces. In between, a set of flashy orange wires connects them in a clever, original way.

The concept of duality is very much present in all of Tsang’s works. In his previous photographic series, such as Landmark (2012), space was divided into infinite sky and high buildings, highlighting the smallness of humans in the context of nature and also of their own constructions. In Floral Fabric (2013-14), the artist underlined the friction between reality and its representation, shooting real and artificial flowers to reproduce patterns from everyday items such as clothing and shoes.

This time Tsang extends the dichotomy to the opposition between human and mechanical gestures, including the supposed perfection of the machine versus human mistakes, to contrasts between a cold dehumanised society and humans’ clumsiness, and even to the distinction between backward and forward.

The video Housework No.3 (2016), for instance, shows the artist’s arm trying to sneak inside a small opening on the back of a TV set in order to clean it. It is obviously impossible to do the job correctly since the artist cannot see what he is doing. Tsang also recreates the irregular flickering of malfunctioning urban neon lights, highlighting humans’ vain attempts to control technology.

Actual people are almost absent from Tsang’s works but their presence can be felt behind almost all of them. They turn into ghosts or wrapped fashion models in the Failed Light Box series (2016), where silhouettes can be discerned behind layers of plastic. While the curator points out the absurdity of life, Tsang does not seem to be at all cynical, and reveals a great sense of humour.

A round corner mirror fixed to the top of the walls in the first room twists and enlarges the public’s perception of the space. One of the most interesting aspects of the exhibition is this constant change of perspectives, from the top of a moving mop to the back of neon tubes, or through the juxtaposition of images of an open window projected both on a veil and on the wall, giving the impression that the blue sky flies away from its framework.

The powerlessness of the show’s title doesn’t cover the many issues raised by the artist, and the exhibition lacks consistency. It appears as a set of experiments that could gain from being further developed.