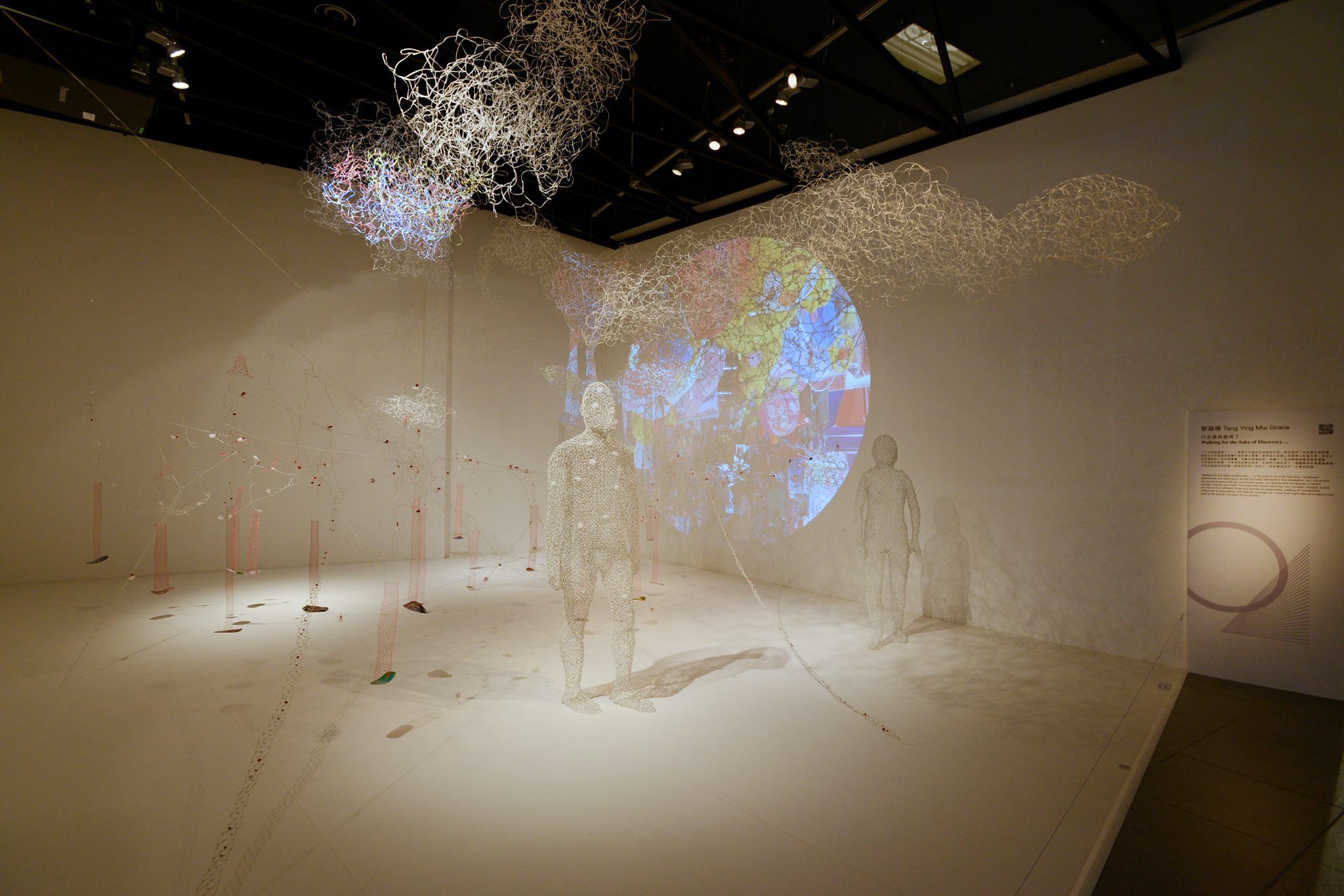 “I’m so happy you can see that this is really an exhibition about gender,” says curator Tang Ying Chi when I speak to her about What Do You Want For Tomorrow?, currently on display at the Hong Kong Heritage Museum.

Although all 12 participating artists, including curators Tang and Wong Wo Bik, are women, only one of them refers directly to gender issues in her work. Part of the fourth annual Hong Kong International Photo Festival, the exhibition showcases a variety of subject matter, rapidly shifting in tone and medium. A Hong Kong perspective is woven through it: Zoe Chu Wing Man’s Tin Ha Tai Ping features cinematic photographs of urban landscapes covered in drawings lit up like neon signs, while Gretchen So’s Ten Thousand Messages couples her shots of deserted areas of Hong Kong with online discussions to create community engagement. Gender, as an issue, is almost invisible.

Tang’s work is, of course, the exception. It’s not the first time she has addressed gender in the art world, having organised female-focused exhibitions at the Hong Kong Visual Arts Centre in 1998 and 2003. Here her piece 108 Ladies Around Us draws on the classical novel Water Margin, about the heroics of 108 male outlaws. Tang replaces the traditional figures with 108 illustrated characters of her own. In a darkened space, anonymous life-size female figures begin to appear, one by one, on the wall, suggesting the invisibility of women in both literature and the public space. The sudden presence of male images, however, complicates the idea that the work is a simple reversal of gender roles. It turns out that nothing about the exhibition’s gender politics is simple at all.

The curators have worked hard to thoroughly explore the issue of gender from the moment of the exhibition’s conception. It was envisaged, in part, as a follow-up to the 2014 festival’s Voices of Tacitness: Asian Women Photography, this time with local artists. Academics studying the intersection of art and gender were invited to observe and share their thoughts with the artists while it was being organised, followed by a forum after it opened to foster continued discussion of its gender connotations.

Gender is invisible, therefore, not because it is ignored but because the exhibition cultivates a more complex relationship with it. The curators navigate the intricate dual forces behind both the importance and the burden of representation. Photography is a male-dominated tradition, so increasing female representation is a goal, but persistently defining artists as “female” can be limiting. An exhibition with only men, after all, would rarely be marketed as a “male” exhibition. This is underlined in the curators’ opening statement, which reflects on the late architect Zaha Hadid’s dislike of being defined as a “female” artist, but simultaneously contemplates the need for female representation in Hong Kong photography.

Photography is an apt medium to explore these ideas. It has always been embraced by female artists for its potential not to show the truth but to expose the supposed truth as manipulated. Julia Margaret Cameron, a 19th-century British photographer, was one of the first to deliberately alter her images, playing with techniques such as soft focus and light exposure to draw attention to the medium’s artificiality. At the same time Ottoman Princess Nazli Hanim was taking photographs of herself that consciously made fun of western artistic tropes of the Middle East, dressing herself as a harem master in a satirical portrait.

While artistic pursuits such as painting and sculpture were often institutionally kept from women, photography – and later video and digital art – provided room for them to create alternative narratives. By including both traditional photography and works across the digital and technological spectrum, the curators use this destabilising force to question the very idea of gender itself. “What I’m aiming for in this new digital world,” says Tang, “is to ask: how are we going to see things in terms of gender? In this world, do we know who is female and who is male?”

To destabilise gender, then, is to provide room for both artists and viewers to exist without unnecessary stereotypes or societal expectations. The works in the exhibition are marked by the freedom that comes when gender is first acknowledged, then left behind. In Joe Yiu Miu Lai’s video work Listening to Family’s Faces, in which family members are asked to describe each other, the dissection of people’s appearances – accompanied by close-ups of various facial features – occurs across genders. The understated experience of watching women’s appearances described without cruelty or sexist language is a sincerely powerful one.

One of the standout pieces of the exhibition is co-curator Wong’s Yesterday • Tomorrow. Two videos play separately, one retelling the story of a burglary in the women’s dormitory of the artist’s university, the other using images from the old Central Police Station to comment on the dichotomy between closed and open spaces. In both videos, the artist plays with stereotypical depictions of women: a spinning ballerina in a music box; a victim in a fictional crime drama; a vaguely spiritual woman who sits with her eyes closed in front of a waterfall. These depictions are consistently subverted and disjointed through the use of sound and play-acting. The music starts, stops and grows more ominous, highlighting how artificial these tropes are.

Wong subversively plays with technology and highlights its artificiality. Although not addressing gender directly, her work destabilises it, providing space for new definitions of what it should look like. It functions as a microcosm for the exhibition itself. The exhibition’s titular question concerns the future, positing a space where identities and narratives can move beyond our current definitions, and where the power of photographic and digital art can be used to its full potential.