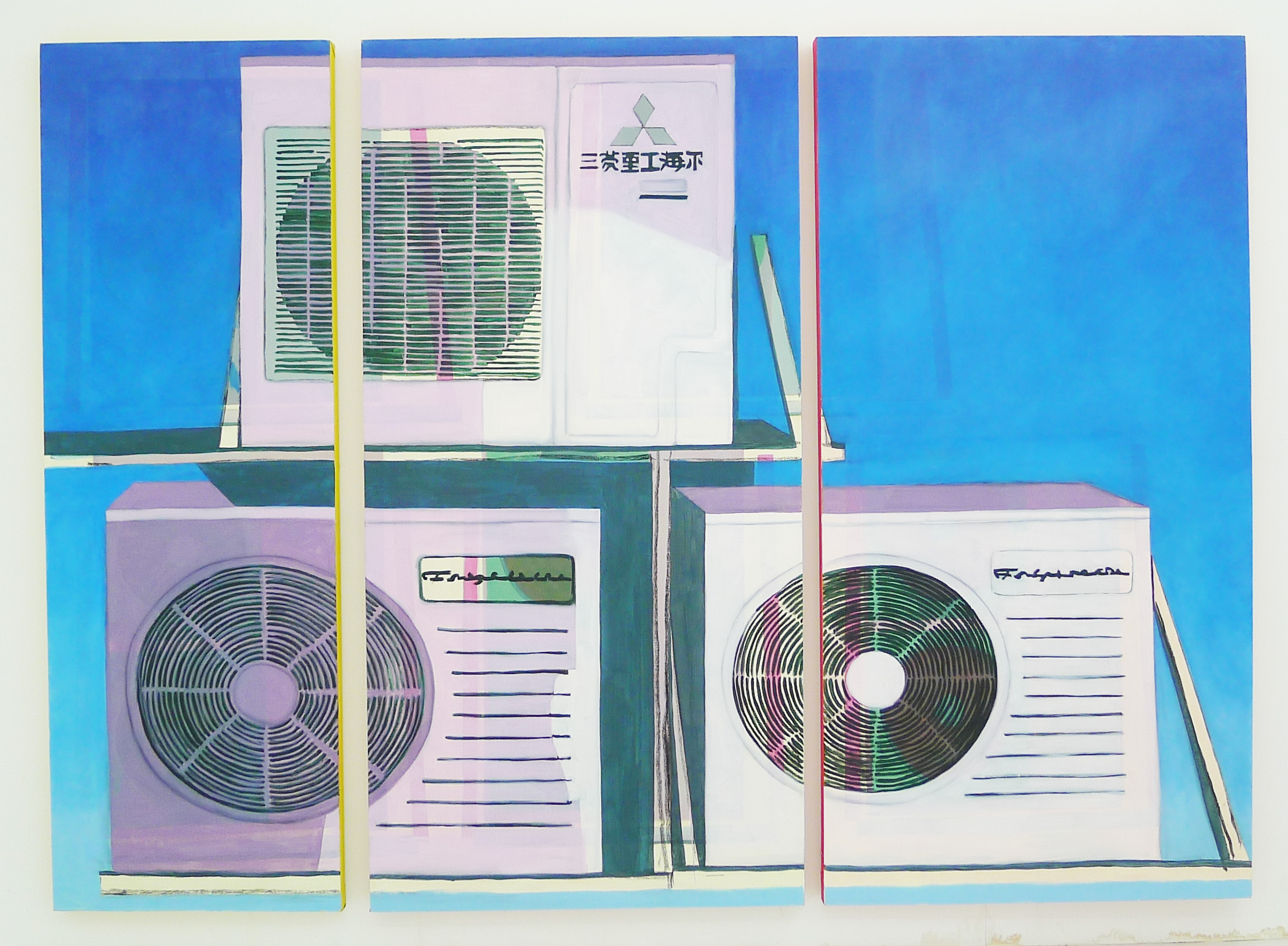 Upstairs in a nondescript tong lau walk-up tenement building on a busy Sham Shui Po market street selling cheap electronics is 100ft Park, a small exhibition space organised by a group of three artists and arts workers. The space is supported by an architect whose office is unseen from the front of the unit, with access through a semi-concealed door. The exhibition area is a little bigger than the 100 sqft space the artists previously had in Sheung Wan space – but not by much.

Ko Sin Tung and Stephanie Sin’s Form Simultaneity recreates two exterior forms familiar to anyone who has walked around Hong Kong. The entire exhibition space is covered in tarpaulin for Ko’s installation Standing (in the old ways), giving the impression of a construction site. Placed around the room are three piles of posters, each featuring a different image of an exterior wall that bears an outline of an adjacent demolished building. The top poster of each pile has been subtly painted by Ko: she has painted out the steel framework that would support an empty site’s adjacent walls after the building has been demolished.

Ko’s sparse installation focuses viewers’ attention on Hong Kong’s heavy-handed urban development, often touted as “regeneration”, that destroys older areas, low-rise buildings and businesses, restaurants and shops that have been around for generations. The replacement buildings invariably do not improve the local environment, while new middle-class residents force out the established population. Ko’s installation is barren, similar to the desolation seen after the demolition of a building; empty tracts of land also often lie idle for years, as developers wait for the most opportune financial conditions to begin work. Blink quickly or squint and the vertical poster piles could be high-rises; even their bad square-box design recalls aesthetic faults common in Hong Kong buildings.

Stephanie Sin highlights Hong Kong’s ubiquitous split air-conditioning condensers that happily protrude the walls of buildings. Air conditioners are entirely utilitarian and are not designed to be beautiful or admired. Sin, however, displays them as a highlighted architectural detail. Three-panel painting Apliu Outdoor Units 01 sits amid Ko’s building-site installation on an interior wall, and exactly replicates the three air-conditioners on 100ft Park’s exterior wall. It is an intriguing genre painting whose appearance is saved by an overtly iridescent aura. Sin has painted the air conditioners as if illuminated by the changing colours of sunset. The result is a psychedelic rendition of blues, whites and reds that clashes with Ko’s cool installation. The juxtaposition continues with two small paintings, Apliu Outdoor Switch 01 & 02, depicting the clunky emergency-stop switches that always sit alongside air conditioners. These paintings are sited near the gallery’s front door and, oddly, give the room a symmetrical balance of colour and manipulated space.

Sin and Ko are friends, both with studios in Fo Tan’s industrial area. Together with curator Andre Chan, they bring a little of Hong Kong’s exterior and the city’s development pressures into 100ft Park’s interior. The result is a quietly intelligent observation of the city’s urban landscape.