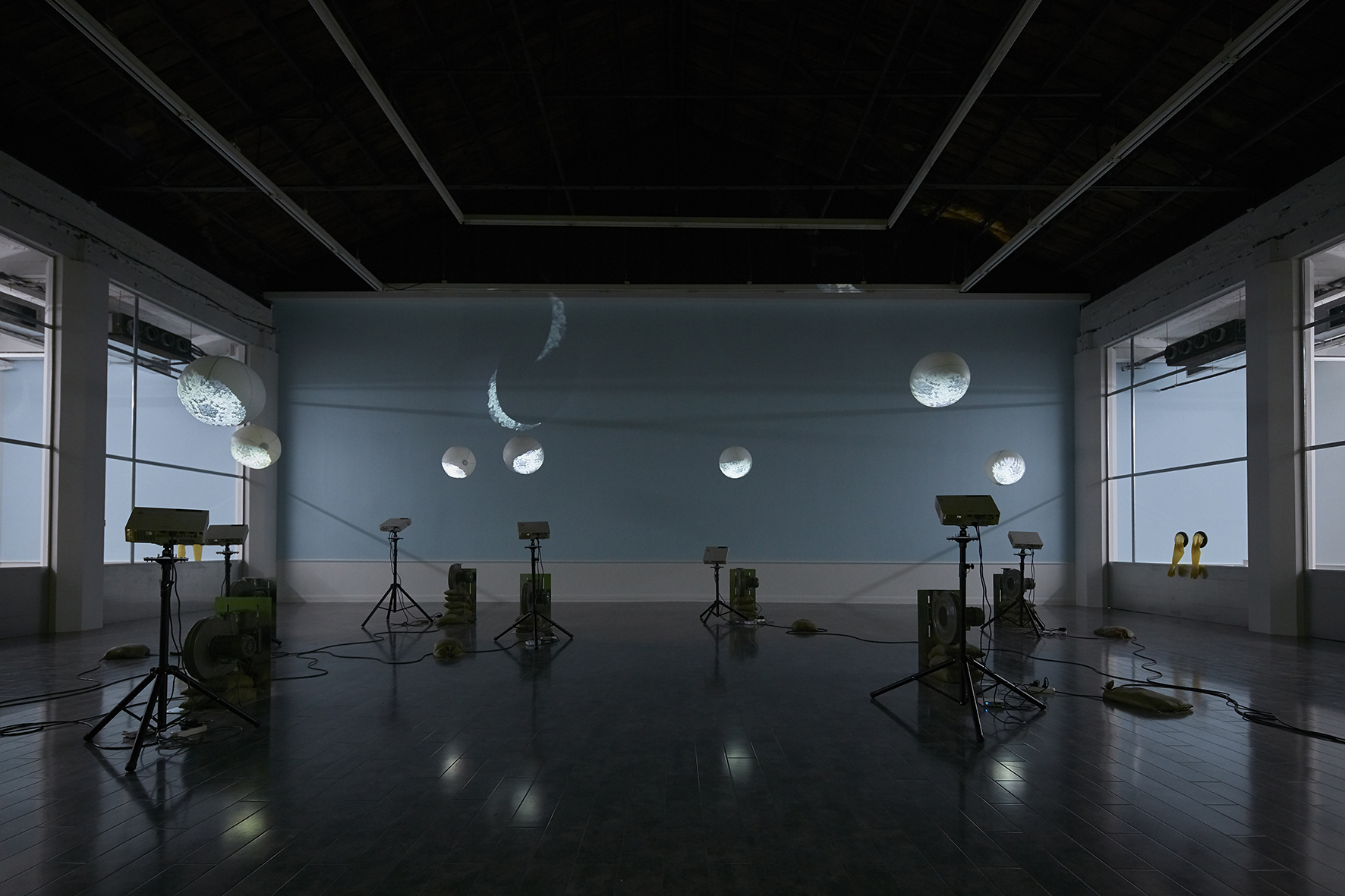 For his first solo show at Antenna Space in Shanghai, Nadim Abbas again draws heavily on the space between science and fiction. This time an image of the common cold virus, which has caught his attention for some time, becomes the point of departure.

On entering the main exhibition space, Human Rhinovirus 14 (2016) bombards the visitor’s senses with the glow of floating beach balls in the air, and the sound of the centrifugal blower fans that keep them up. Abbas projects a visual mock-up of the common cold virus onto the floating balls, creating something between an image and an object. He wanted to translate his near obsession with this image of the virus into a work of art; after lengthy research he decided to use several 3D molecular visualisation programs, one of which, Chimera, gives the show its title. The work straddles scientific enquiry and fiction, the real and the imagined.

In contrast the next work in the exhibition, Chamber 667/668 (2016), is quiet, motionless and sterile-looking. It flanks the previous piece on both sides with its two quarantine chambers made of large glass panels; the rooms are empty except for some white geometric modular structures designed to display the rolls of toilet paper that sit on top of them. Abbas presents toilet paper as generic, industrial and familiar while at the same time unique, and suggests a connection with the common cold virus, which he sees in a similar light. Pairs of long medical examination gloves hang from windows between the main room and each of these chambers, accentuating the threshold between the inside and the outside. Employing humour, as he often does, Abbas uses an unexpected wallpaper pattern, and a pudding with a common housefly whizzing around it. In such a sterile environment both the pudding and particularly the fly seem out of place.

The motif of the pudding and the fly follows us into the last piece in the show. Blancmange, n ways (2016) consists of a photograph and a series of white geometric objects, their profiles determined by iterations of the Blancmange fractal curve. Blancmange refers to a white dessert popular in the UK, and can also refer to a boring person. On the wall is a large photograph of the actual pudding, which this time the fly has successfully landed on: a punning maths in-joke.

As in his previous works, Abbas creates a space between the real and the imagined: the factual and scientific versus the imagined and fabricated. His works are always meticulously researched and executed, but leave room for the unexpected, as well as a dash of humour, often in the form of puns.