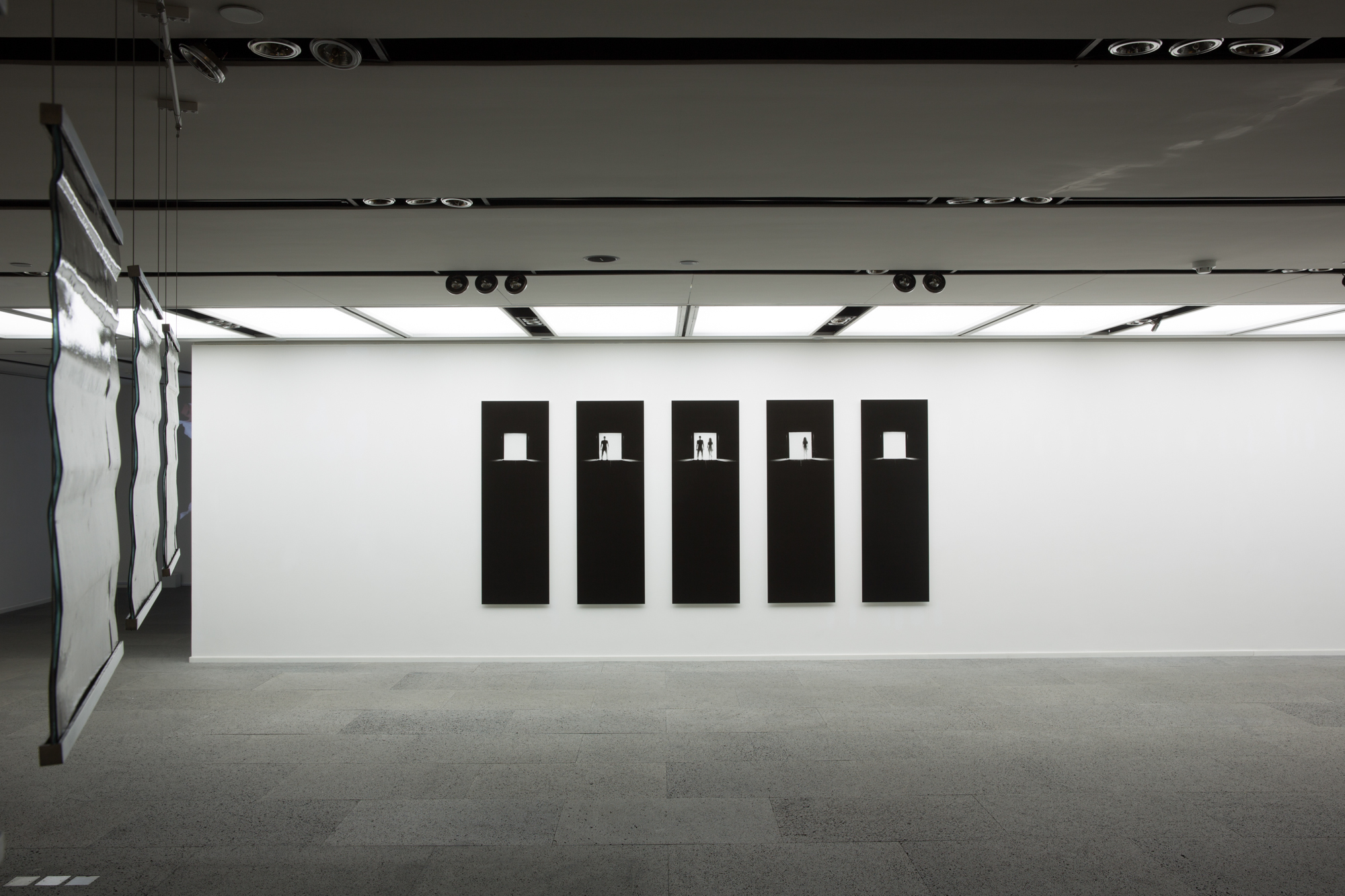 The works of German-born, London-based photographer G Roland Biermann inhabit a space that flirts with reality, but really exists somewhere between our realm and the surreal. Transformations, his Hong Kong debut exhibition at Galerie du Monde, reveals a thematic concentration on uncertainty and the grey areas of existence, and how we humans interact with these spaces as both individuals and societies. In a city like Hong Kong, where green places mingle with high rises, and the pavements swell with workers glued to their phones, Biermann’s undefined worlds carry a poignant message.

The works in the exhibition belong to three projects from between 2009 and 2016. The first chronologically, Apparitions (2009), depicts ghostly figures and objects inhabiting carefully curated spaces of Biermann’s imagining. These compositions resist traditional narratives and are rife with contrasts, making them an ideal jumping-off point for the exploration of metaphysical questions that is a consistent feature of Biermann’s oeuvre. Shown in groups of between two and five, they echo the diptychs and triptychs of medieval Christian art, or even the folding panels of traditional Chinese painting. Where those traditional works often conveyed specific narratives related to popular myths and iconography, though, Biermann’s monochrome photographs suggest a narrative without making one explicit. The artist prefers viewers to develop their own.

“Particularly when you work with lens-based media, which are seemingly objective, it’s interesting – no, challenging – to visualise things that are often missed or overlooked in the process; things that are between states,” says Biermann. “With Apparitions I used an old-fashioned wide-angle, panoramic camera in the vertical, and shot the images in a 3:1 ratio, because, given their size, that nearly matches the proportions of a human being. I think that when the audience looks at an image of such size and proportions, it creates a stronger dialogue between them and the work.”

A work such as Apparition 38 presents many of the contrasts of Biermann’s work: light and dark, natural and artificial, finite and cyclical. Though the sequential presentation of these works points to a temporally grounded composition, the ambiguity of their timelines suggests cyclicality and rejects the finite concepts of beginning and end. Apparition 38 depicts a male and female pair. First each stands alone in a brightly lit doorway; they then come together for a moment before separating and disappearing altogether. Biermann challenges his audience to leave their comfort zones in deciding whether this represents the dissolution of a romantic relationship, or perhaps tells the tale of a couple striving for and finding light in the darkness.

“These are things I’ve been exploring for a while, and I find it fascinating because it’s an area that gets neglected by a large part of the media,” says Biermann. “It’s always easier to describe something as black and white, rather than the greys in between. At the same time it’s typical of the human condition, I think, because we are mostly living in a state of uncertainty, and we really can’t see the beginning and the end. A lot of people are uncomfortable with a situation like that; we prefer things that are certain.”

The same concepts are explored in snow + concrete (2012), which adds dimensions of sculpture and installation to Bierman’s photographic works. snow + concrete X, XIV, XV and XII depict snow in various stages of melting, juxtaposed onto concrete walls or steps in a car park. The three-dimensional textures, inherent sheen and transparency of the glass onto which the photos are printed suggest a frail connection between the works and the empirical world, but the works remain tethered to the uncertainty of Biermann’s metaphysical dream space. The transient substance of snow is made as permanent as the concrete on which it sits.

Normally the falling and melting of snow is dictated by the weather, a force beyond human control. However, through the intentional shaping of the snow, and its cyclical presentation as whole, melted, then whole again, the artist eliminates the organic designs of nature from his compositions.

“If you read them left to right, it seems like the snow is gradually melting and then rebuilding into its original shape. So it’s obviously something that scientifically wouldn’t work, but one could also see it as a metaphor for the life cycle. On a larger scale it works,” says Biermann.

The snow in these works takes on many forms: a sphere, a flat rectangle or a tri-star creeping up a wall. The intentionality of this sculptural reforming has a similar effect to the deliberate placement of the works in a gallery. The components of snow + concrete X are displayed on what Biermann calls an X-frame, four metal arms jutting out in a cross formation from a central support, encouraging the viewer to take in the piece while walking around it in a circle. Similarly, the components of XIV, XV, XII are staggered like the stairs in his photos. Every facet of the work is determined by the artist, much like the paths of both people and nature in Hong Kong are determined by ever-present cycles of construction and destruction.

“Glass, steel, concrete: these materials surround us on a daily basis, especially in a city like Hong Kong,” says Biermann. “I think it makes the natural material of snow even more precious than it usually is in nature. The disappearance of snow in an artificial environment is connected to completely different things such as the disappearance of snow in nature, in the springtime, which is associated with new life and growth. But here it is much more closely associated with loss. At the same time, especially with the way the four glass images are placed so you can see through one image to the next. It is no longer obvious where the beginning and end are, and something that seems easily defined becomes diffuse and associated with the cyclical.”

The most recent component of the exhibition, White Cube/White Wall (2014-16), adds cinematic work to Biermann’s multimedia portfolio. The three-part series began with a video commemorating the 25th anniversary of the fall of the Berlin Wall. The scenery is the same throughout the three works: a group of men and women dressed in white on a black stage, constructing and deconstructing a stack of styrofoam blocks, with the movements of both the humans and the blocks mapped out by the artist. The anonymous figures walk in circles around a block of foam. The frailty of the material is symbolic of the perceived but illusory strength of the walls, both physical and mental, that we build around ourselves. Though the Berlin Wall fell years ago, there are similar walls in Korea, the Middle East and, soon, perhaps in the United States. Once put together, the walls appear as formidable barriers between the individuals in the films. However, when the characters use their agency to overcome these obstacles, they are easily torn down, revealing the frailty of the foam barriers. The symbolism can also be applied to the metaphorical barriers built between individuals in the social-media era, when many of our interactions are filtered by a third party; and, on a grander scale, to the inclusion or exclusion of entire groups from certain nations.

Ultimately, Biermann’s work encourages viewers to consider their own power in a world filled with uncertainty. Despite the seemingly insurmountable structures of both the natural world and human contrivances in government and business, Biermann’s work suggests that by acknowledging the grey spaces in our perceived realities, we can reclaim agency and relieve the pressures of searching for a storybook ending.