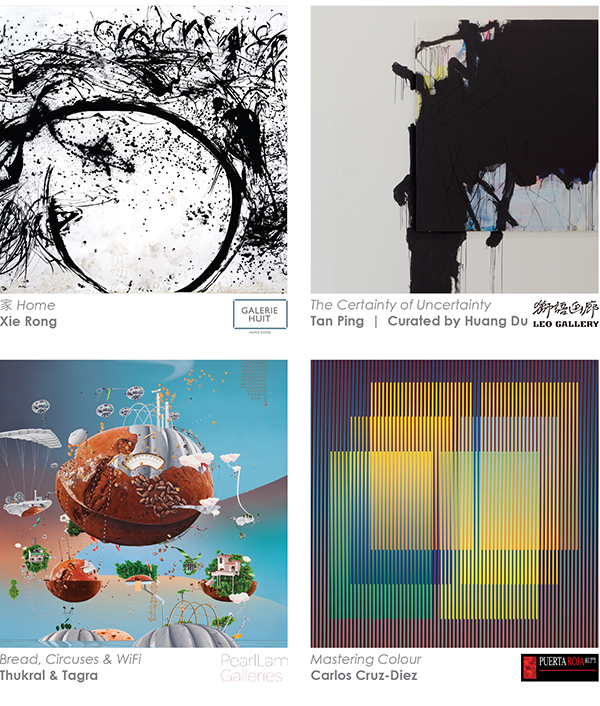 Since its launch in 2015, SOHO 189 Art Lane has become established as one of the most exciting, diverse art destinations in Hong Kong. Located five minutes’ walk from Central, SOHO 189 Art Lane fuses exhibitions of the highest international standard with the buzz of the eclectic, constantly changing Sheung Wan neighbourhood. With an annual roster of curated shows, internationally recognised artists and programmes of performances, films and art, SOHO 189 Art Lane continues to engage the art community locally and beyond.

On this special occasion, the four galleries will present an inspirational, diverse selection of four solo shows by accomplished international artists from China, India and Venezuela. All the works will be showcased in Hong Kong for the first time.

Galerie Huit presents the solo debut exhibition 家 Home by Xie Rong, also known as Echo Morgan. The exhibition will consist of large ink paintings from her inaugural performance I Am A Brush (2011), in which she applied broad abstract gestures and marks to an 11m long roll of paper, as per calligraphic tradition, but using her hair as the brush. The exhibition runs from March 18 to April 20.

Tan Ping: The Certainty of Uncertainty by Leo Gallery presents the Asian premiere of three works by Tan, a Chinese pioneer of abstract art who is also vice president of the Chinese National Academy of Arts in Beijing. Curated by independent curator Huang Du, it runs from March 18 to May 4.

Pearl Lam Galleries SOHO presents Bread, Circuses & WiFi, an exhibition by Indian artists Thukral and Tagra. “Bread and circuses,” from the Latin “panem et circenses”, refers to the Roman practice of providing free wheat and spectacular games to Roman citizens as a means of gaining political power. Applying this logic to critique the new art economy, Thukral and Tagra probe the very authority that curates entertainment in spectacular and repeated regular intervals. The work will explore and propose connections between bread, circuses, and WiFi. The exhibition runs from March 20 to April 28.

Puerta Roja presents Carlos Cruz-Diez: Mastering Colour, the first solo gallery exhibition in Hong Kong by the Franco-Venezuelan artist, which captures over six decades of tireless research into colour, line and perception by the 20th-century master, as well as experimentation with new materials and technologies that challenge visitors’ experience of vision and perception. The exhibition is part of Le French May and runs until May 25.
SOHO 189 Art Lane Gallery Events

Performances and talks from 6.15pm

By invitation and Art Basel VIP preview card only

By invitation and Art Basel VIP card only