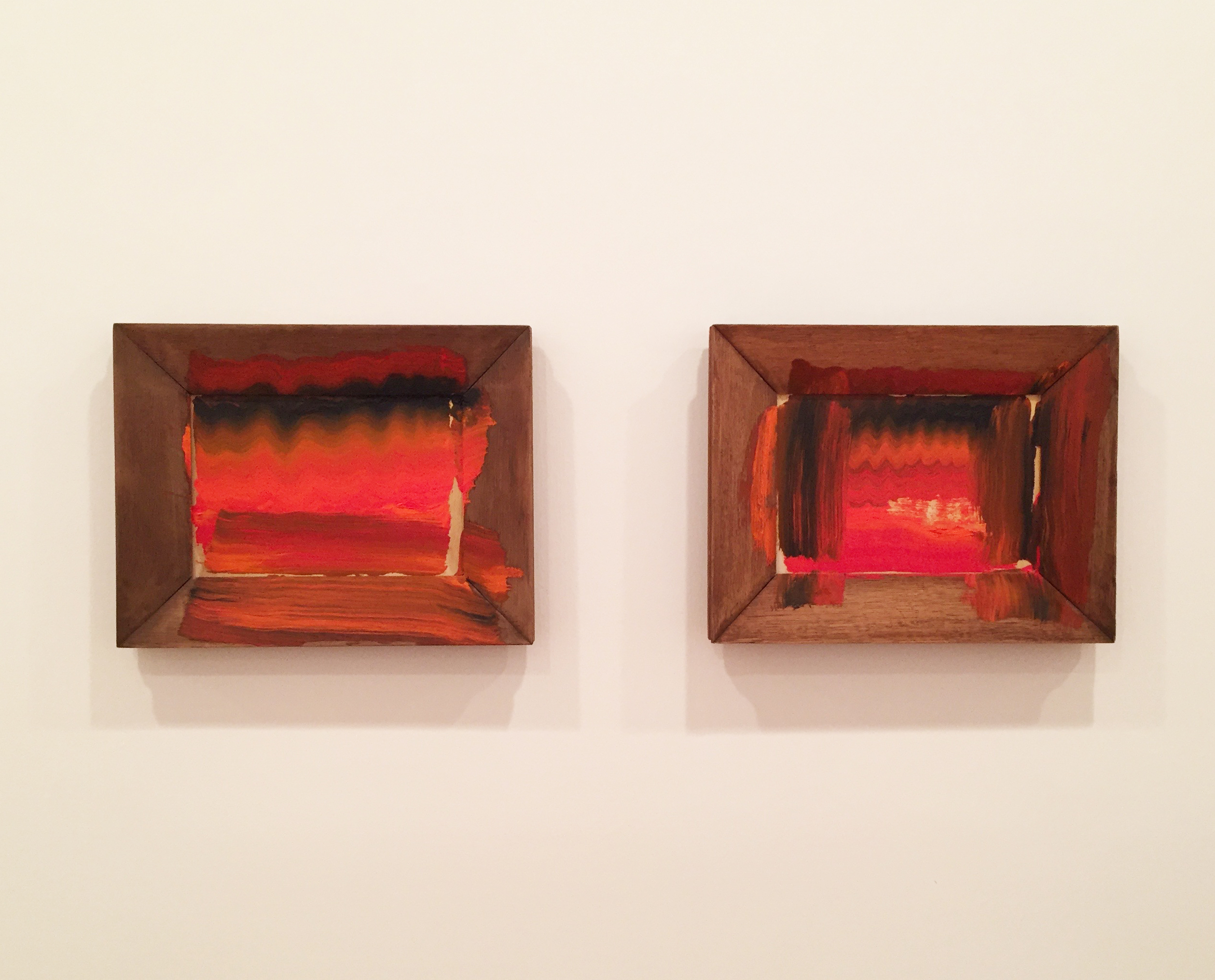 I never interviewed Howard Hodgkin, who passed away on March 9 aged 84. The artist didn’t like to talk about his paintings, or attempt to explain them into relevance, although for the purpose of this review I’m going to do just that. Hodgkin’s paintings aren’t about narrative or words. He didn’t paint figuratively, nor was his work grounded in the conceptual or the ideological. What he did was more transcendent. He brought the interior world of memory and emotion to life with colour, making that which can’t be articulated tangible and physical through paint.

One of the UK’s most celebrated painters, Hodgkin’s career spanned 50 years and included winning the Turner Prize in 1985 and representing Britain at the 1984 Venice Biennale. But In the Pink, his first and only exhibition at Gagosian Hong Kong, from January 19 to March 11 – featuring 23 paintings, mostly small in size, that play with varied formal elements – was suggestive of an artist still in his creative prime until the end.

Exhibition view of In the Pink at Gagosian Hong Kong, 2017. Image © Artomity.

Figurative paintings ideally require some viewing distance for the eye to take in the entire composition and gain perspective on the visual narrative. But Hodgkin’s paintings invite you in, windows into the inner world of the artist. In close proximity, the emotions and memories that inform the paintings stir to life. They are contained in the detail of the strokes, the mix of colour and shape, the flat planes and dense layers of paint.

There is an immediacy to these paintings that calls to mind the works of the 1950s Japanese Gutai movement. Some of the smaller, sparer compositions like Night Thoughts (2014-15) and Water (2016) seem to have been created in one breath, carefree and uncontrolled brushstrokes driven by a spontaneous frenzied impulse, executed alla prima, wet paint on wet paint. Strokes and dabs of colour are applied energetically, feral and uncontained by the frame, leaping beyond it so colour seems to take on an anarchic life of its own. The paint becomes a force to reckon with, unrestrained by the rules of painting, defying expectation and convention. Frames are attached back to front to the wooden supports, often made from plywood, so that any decorative element does not compete with the painted surface. But the frame and wooden support are as much a part of the work as what is painted on them and how it is painted; wood, after all, has its own character.

In Indian Waves (2013-14), horizontal strokes of turquoise and white are layered atop one another, the oil from the thick white strokes seeping out into the raw wooden support, bleeding into the grain, bringing the strokes to life and giving them depth, dimensionality and movement. There is an economy and restraint to the composition, with whole areas of the board left untouched, creating a tension between positive and negative space, sound and silence, busyness and stillness. In Through a Glass Darkly (2015-16), the wood grain gets confused with the marks from paintbrush bristles, adding another layer of complexity and texture. Hodgkin didn’t take the material on which he painted for granted. As with paint, he understood of the inherent qualities of wood, working with or against the grain to enhance the painting.

Exhibition view of In the Pink at Gagosian Hong Kong, 2017. Image © Artomity.

The paintings on show, each a bold, fearless demonstration of the use of colour, are inspired by the artist’s time in London and India, which is reflected in their titles. But colour is not used for its own sake: for Hodgkin colour was a language, the command of which allowed him to capture a whole palette of impressions and condense them into small paintings. Atmospheric abstract landscapes conjure up impressions of weather conditions, the transformation of light, dazzling sunsets. Paint takes on the quality of rain, wind, fire.

Bombay Afternoon (2016) evokes the searing heat of a summer afternoon and dusty streets, a glow of orange and yellow burning behind the eyelids from staring into the sun. Darkness at Noon is a visceral lick of purple that looks like a tongue has been dragged over fresh paint, leaving behind a glistening wet surface. The work is moody and seductive; the grain and surface of the wood and the slickness of the paint pull the viewer in, begging to be touched. Similarly, Britannia, Bombay (2014-15) is a dense, buzzing swarm of dappled blue paint, whirling and eddying across the surface, bursting beyond the frame.

The paintings all suggest a light hand. They seemingly capture a brief moment in time, conveying spontaneity, but many of them took several years to complete; In the Pink (2008-2014) took six. Each work is a drawn-out, controlled dialogue, and sometimes a struggle, between artist and material, and between paintbrush and wood. They are born from patience and contemplation, a process of constant revision over time, one that is imperceptible to the viewer.

These are not mute paintings. Every inch of surface buzzes with life, with immediacy and presence. Hodgkin’s paintings are not just about the act of looking, but also feeling and sensitivity. They are emotionally charged objects burning with intensity, engaging not only the eye, but also the mind and heart.