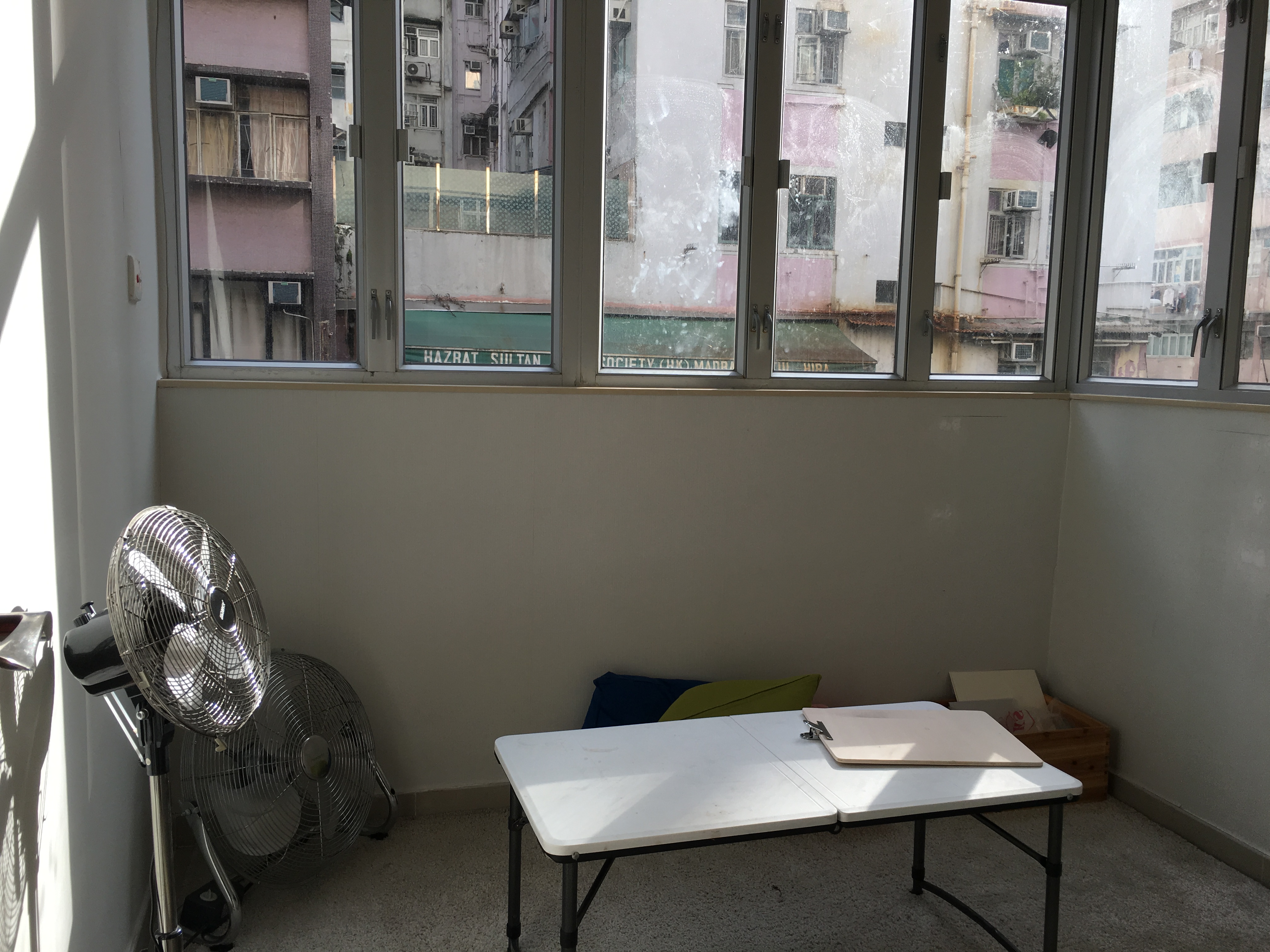 Opening with the starkest, barest of scenes – “A country. A tree. Evening.” – Samuel Beckett’s Waiting for Godot sends viewers on a reflexive rummage for revelation and meaning. There is an analogous barren yet expectant vacuity in the closing exhibition at things that can happen in Sham Shui Po: the door opens onto an empty Hong Kong apartment, its walls painted deep grey, and the eye falls on a sole painting hung near the far right corner in which Dumbo, wraith-like and ethereal in orange pastel hues, hovers mid-flight against a background of electric yellow. The only other work in the room, displayed on the wall opposite, is the diptych He-Man & She-Ra (2015), two garish superhero murals executed in the shabby vintage style signature to Hong Kong artist Law Man Lok, aka Lawman. A sense of stagnant expectation pervades, Beckettian with a whimsical twist: He-Man and She-Ra are frozen mid-transformation; Dumbo is trying to fly; and Things’ two-year-old space in Sham Shui Po is set to close, while its founders, artist Lee Kit and head of strategic development at Asia Art Archive Chantal Wong, plot future activities beyond the non-profit’s physical location.

Lawman’s The ABCs of Law exhibition continues into the smaller adjoining rooms of the sparsely furnished apartment space. In the brightest, naturally lit room adjacent to Dumbo, rectangular streams of afternoon sun pour in from the windows to interlace with the cartoon sunrays depicted in Wanted Wanted (2015), a manga-inspired quadriptych. The only work – indeed, the only object – in the room, the four-panel digital collage of drawings is cheerfully kid-friendly at first glance but deathly sinister on closer inspection. A wild-eyed grin, repeated; a hangman’s knot, progressively tightened; and the ominous numbers “66”, recalling the controversy-laden apparent suicide of mainland Chinese dissident activist Li Wangyang on 6 June, 2012: all are more disturbing for the work’s innocuous facade.

At the opposite end of the apartment, a dark, windowless room houses gently whirring projection installation All I know about the Daya Bay Nuclear Power Station Contingency Plan (2012). Blurred images click into semi-focus almost half-heartedly, configuring with a nonchalant ambiguity that belies the gravity of the work’s concept. In 2012 the Hong Kong government aired a promotional video that ostensibly aimed to educate the public about safety issues surrounding the newly built Daya Bay Nuclear Power Plant. Instead of offering practical information, the video’s empty reassurances, asking citizens to not be afraid, constituted a preposterous, ludicrous form of propaganda. Finding the material absurd, Lawman selected still images from the video that he found to be formally “beautiful and concrete”, and presented them as discrete slices of isolated, dreamlike imagination.

Under Lawman’s manipulation, the images are hazy to the point of unintelligibility; in the face of their muffled reticence, the viewer almost feels more drawn to the dynamic materiality of the rotating carousel projector. The images themselves approach the lingering quality of an afterthought – lethargic yet graceful, indifferent yet curiously haunting. Daya Bay, The Flying Dumbo, Wanted Wanted and He-Man & She-Ra seem to lurk at the shadowy perimeters of the vacant apartment, as if themselves reflecting on the ambiguous potential of the artistic gesture, even as viewers ponder the ambiguous social and political potential of art itself. Is this really the closing exhibition of a unique non-profit Hong Kong art space?

Things was one of the city’s few truly alternative sites for art and related experimentation. Since autumn 2015, the renovated tong lau, a 1960s walk-up tenement, in the gritty Sham Shui Po district played host to everything from exquisite installations (Chloe Cheuk) to raunchy animations (Wong Ping), and from screenings, book launches and various forms of interventions (Ocean Leung’s architectural structures, Doreen Chan’s speed-dating event, Oscar Chan’s extended self-confinement within the space) to residencies that cultivated unique investigations (Devora Neumark’s exploration of joy as a radical practice). Together with an eclectic library of books and artists’ publications and weekend English classes for young asylum seekers and refugees, things’ programme was ambitiously interdisciplinary but spontaneous and relaxed, grounded in open-ended research, authentic conversations and each artist’s singular intentions.

It was a modest enterprise that was never overly serious about itself, while still succeeding in building an alternative to the heavily commercial Hong Kong art scene. Things manoeuvred a fine line between many dichotomies: the local and the global; theory and nonconformity; structure and spontaneity; criticality and entertainment. One area where it never compromised, however, was in its commitment to art for art’s sake, operating on resources from individual supporters rather than institutions or the government. That allowed its agenda to be free not only from the market but from any form of institutional constraint or demand, including box-office performance, a key benchmark for traditional funding. Such autonomy often results in programmatic choices that don’t attract the largest audiences. As Mary Lee, the day-to-day manager of the space, once put it: “Somehow I have accepted the fact that some art forms only cater to a limited audience.” It’s a curious sentiment that hovers between reluctant resignation and enlightened acceptance. Should art aim for more, and if so, what and how?

That seems to be the question Lawman ponders in his exhibition. Tacked unobtrusively to a wall near the entrance are A4-sized sheets of paper on which the artist has typed up personal musings on the nature of art and creation. “A is for Artist”, “B is for Bauhaus”, “C is for Commons”, “D is for Duchamp” and so on: in a conversational, non-affected, almost diary-like tone in his native language, Chinese, Lawman reflects on schools of art theory, their impact on his practice, and symptoms of the wider artistic and sociopolitical scene in the city. The artist says that it’s an ongoing project and he plans on someday reaching “Z” (at the time of viewing, “D” was as far as he had got). It’s a disarmingly guileless undertaking whose very nature challenges the standard paradigm of a modern-day exhibition: a fixed timeframe, a cohesive and marketable concept and, for a city famed for its exorbitantly priced square footage, equally marketable art. Instead The ABCs of Law adheres to things’ agenda of art being an incubator rather than just a presenter of ideas and conversations and, in Lawman’s own words, also being “an attitude” instead of a career or even an object. It’s a special exhibition that aptly bids adieu to a special space, whose allegiance to the ordinary and the domestic ultimately reminds us that all change starts at home.