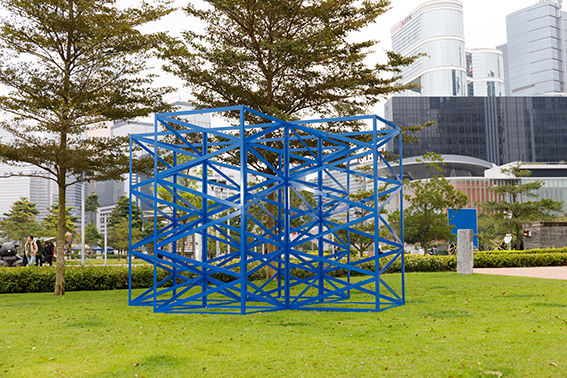 Hong Kong, renowned for its booming art market, is widely regarded as Asia’s art hub. While commercial success has unquestionably been essential in validating this rising status, so has been the provision of proper education and exposure of the public to a diverse range of artistic practices. To fulfil its potential as an art capital, Hong Kong needs more of the latter. There are still sectors of the art community that are severely under-represented, from local art initiatives to experimental art spaces and, in particular, public-art projects.

Public-art programmes are vital to cultural development in cities, due to the easy accessibility to art they provide. Hong Kong has suffered from a lack of quality programmes, but two recent initiatives seek to change this. One is Hong Kong’s first sculpture park, and the other is the formation of HKwalls, a non-profit organisation facilitating street-art projects citywide.

Harbour Arts Sculpture Park opened in late February, altering an iconic space on the harbour front between Central and Wan Chai. Co-curators Tim Marlow and Fumio Nanjo have emphasised the significance of the park in developing public arts in Hong Kong, selecting artists whose work can be incorporated into an everyday context but has a cultural and aesthetic relevance specific to the city and its people.

The participation of local artists is critical to the project, including Wong Chi-yung, Matthew Tsang, Ho Kwun Ting, Kacey Wong and Morgan Wong. Through contemplating the duration of time, Morgan Wong’s A Time Capsule of Someday “prompts audiences to think about what could be of Hong Kong, someday”, according to the artist.

A spin-off piece from his Time-needle series, it comprises a marble plaque, with a tube in the shape of a needle buried beneath, containing metal dust from a steel bar. Process-driven and indicative of determination and duration, the idea comes from the Chinese allegory of filing down a steel bar until a needle is made.

While Morgan Wong applies concepts from local, ancient traditions, Kacey Wong’s practice is heavily inspired by the local political climate. Placed next to the infamous “dark corner” of the Umbrella Movement, just steps away from the Legco building, the site of his work Asteroids and Comets is politically and emotionally charged, especially for the artist, who was an activist in the movement. Politics is a part of his life as much as art: “As I was installing this work, I was thinking about the dark corner and also in a way exploring the dark hole of the universe,” alluding to the astronomical theme of his piece. In his structures, compositions of linear and circular elements complement the skyscrapers behind, and also allow physical human engagement: Wong encourages people to step inside and immerse themselves in the piece.

Supporting the street-art community and exposing their work to public viewers was a priority for the founders of HKwalls, Stan Wu and Jason Dembski, who organise an annual street-art festival and other community-driven initiatives including an interactive workshop and a large mural at Bui O School on Lantau, and a massive street-art maze in conjunction with their main sponsor House of Vans. They emphasise the importance of visibility and viewer engagement for the art form.

“We thought we could fill that gap by providing artists prominent exterior walls to paint where the public can see not only the final product but also the process,” says Dembski.

By allowing viewers to witness the process, the work becomes participatory and more accessible. This connection is amplified when a work is created in a political context. The Umbrella Movement produced some of the most moving, innovative street-art works in Hong Kong, much of which was the result of collaborative efforts.

Says Dembski: “One of the most memorable pieces for me was a paste-up in Central during the Umbrella Movement which looked like a Windows system error message, reading ‘you do not have the permission to vote’, by an unknown artist. Citizens of Hong Kong have perhaps never been so involved in and committed to using art to collectively express their feelings about the political future of their home.”

You do not have the permission to vote by unknown artist. Courtesy HKwalls.

Street art is inherently site-specific, almost always created for a particular physical surface, building, neighbourhood, community and city. Two notable pieces from HKwalls 2016 stunningly adapt to the architecture of the building and landscape of the streets: Peeta’s work at the Golden Computer Centre and Okuda’s Rainbow Thief, both in Sham Shui Po. Characterised by bold, graphic imagery with dynamic lines, Peeta’s work shows command of perspective and illusion, particularly at the corner of the building; while Okuda’s giant, vibrant work spans the entire length of a building, seamlessly incorporating itself into the surrounding urban landscape.

The sculpture park and HKwalls represent different ends of the artistic spectrum, but have very clear agendas that focus on fostering cultural development. Both projects add new dimensions to public art that are unique to Hong Kong and reflective of what the city has to offer.