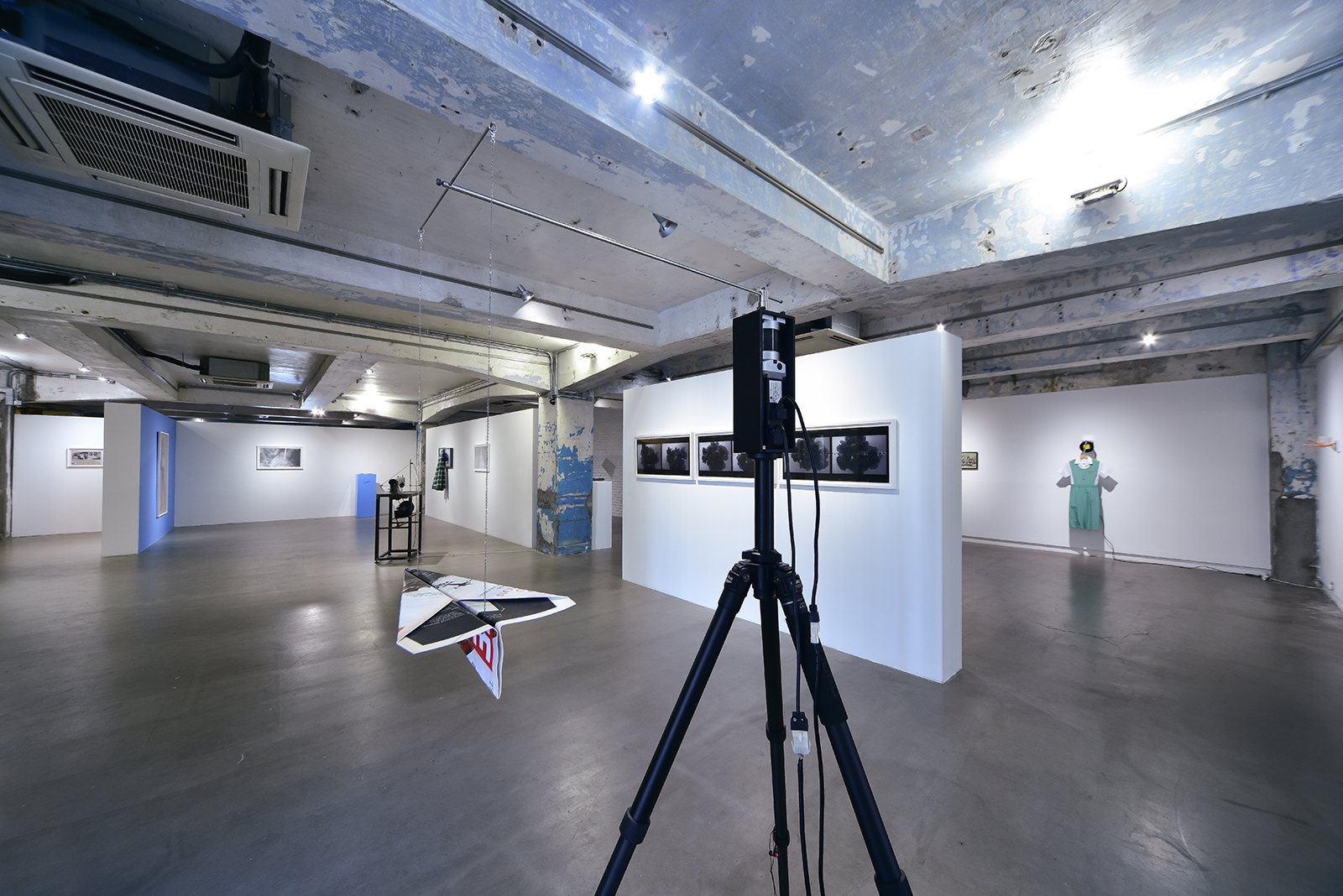 “Is History not simply that time when we were not born?” asks Roland Barthes, while looking at a photograph of his mother as a child, in his book Camera Lucida. Leung Chi Wo’s process is all too Barthesian: born in 1968, he focuses here on 1967, the year when the most violent riots in the post-Second World War history of Hong Kong took place. In the womb of his mother, the artist could not witness those events, and to recollect today occurrences that are lost forever, he can only rely on archives, found objects and stories. This exhibition could be perceived as a personal museum, another version of the Museum of the Lost project he and Sara Wong began in 2013, but one dedicated to 1967, a year he was not around but tries to reach for – despite the effects of time and subjectivity – through the power of photography and the socially constructed memory of the past.

Fraser (2015) epitomises the artist’s practice and concerns. The installation features an old sewing machine that has been modified to make holes very slowly, at one stroke per minute, in a loop. It regularly pierces a roll of black-and-white negative film depicting artificial roses. The act of puncturing a bunch of roses is by itself both poetic and violent. The roses, exhibited as a series of photographs, feature a line of holes as if shot using a machine gun.

The sewing machine could have been the symbol of Hong Kong in the 1960s and 70s, when most of the city’s workers were employed in factories. They had no labour rights and often worked 12 hours a day without leave. The artist’s father worked in a large garment factory, and his mother used to sew at home to earn additional money. The work asks what price was paid for the economic development of the territory, and who benefited. The roses refer to the artificial-flower factory where the riots started with the dismissals of about 650 workers in April 1967. The escalation of the labour dispute quickly turned into a full-scale anti-colonial campaign.

The looping of the installation foregrounds the idea of repetition, which is essential to Leung’s practice: the choice of the medium of photography reflects this fascination, with its ability to repeat forever a moment that only lasted an instant. Applied to the theme of
history, it questions the possible repetition of events, and invites the viewer to approach the past from a contemporary perspective. The sewing machine could also be perceived as a metaphor for the camera, combining two opposite yet complementary readings of time: the punctual (photography), which isolates or freezes moments in time; and the linear (film), with its continuous movement.

The idea that history could repeat itself is underscored by the exhibition of a 2010
newspaper article dealing with the riots, headlined “Return of the Radicals”. It offers a guideline to the whole exhibition: is there anything left today of these protests that took place 50 years ago? The paradox is that the artist’s kinetic devices and repetitive movements suggest an iterative return of history, without any change, while at the same time his subjective reappropriation of the events highlights the impossibility of history repeating itself, since we barely know what exactly happened.

Both history and photography resist the artist’s attempts to re-create the 1967 events. His endeavour echoes Jean Baudrillard’s famous statement “The Gulf War did not take place”. The French philosopher knew that the conflict did happen, but with this provocative sentence he emphasised that most people experienced it only through television and media images. Leung did not experience the riots. We have no proof that the images and objects exhibited here are authentic. They do not narrate history but the artist’s own re-contextualisation of history, a recycling of traces and quotations.

Playing with a free association between quotes and images extracted from the newspapers of that time, Leung creates new meanings on the brink of reality. This is typical of his work and its attempts to bring back anonymous people from the dead through the re-appropriation and re-actualisation of archival photographs: here, a photograph of an anonymous person, taken on a ferry in 1967, revived and recontextualised with the unconnected words “I hate him”, quoted out of context from the Hong Kong Standard; or another anonymous photograph showing a young man in 1967 on Lugard Road and engraved with the caption “growing up”, a reference to a quote from a magistrate in another newspaper. It is left to the audience to invent their own
narrative and to connect the individual stories if they wish to do so.

Another series in black and white represents archival photographs that have been reproduced as pairs and juxtaposed as if they were reflected in a mirror. All of them bear the engraved caption “extremely recalcitrant”. Without reading the artist’s statement, it is hard to get an idea of what he intended to express. The word
“recalcitrant” refers to Susan Sontag’s definition of photography, “understood as recalcitrant, inaccessible”, and to a comment by a magistrate towards schoolgirls who disobeyed police officers during the riots. Once more, Leung draws a parallel between photography as a medium and history.

It is almost impossible to follow all the trails intertwined in the exhibited works, and some associations are a bit far-fetched. For example, Leung combines a schoolgirl’s uniform with a record of the theme tune of Charile Chaplin’s last film, A Countess from Hong Kong, with the argument that they both refer to women who had to escape Hong Kong: the student was jailed because of her involvement in the riots, and Sophia Loren, in the movie, emigrates to the west. One of the core questions with research-based practices is the extent to which the public needs to know the context and underlying
stories hidden behind each work to be able to appreciate it. While it is impossible to fully
appreciate Leung’s practice without an introduction, the explanations in the booklet here reduce the significance of the installation. The risk with the systematic contextualisation of the work is that the audience tries to understand or decipher the work rather than feeling it or responding to it freely.

The 1967 riots left a deep impression on Hong Kong society. Interpretations of the events are still controversial today, with debates over who was responsible and to what extent they were a spillover of the Cultural Revolution: a “communist-initiated confrontation” or a “righteous mass movement”. Leung is not taking either side: in his statement, he says: “I know I am no historian or researcher. I will be lost and will never establish any conclusion.” Maybe this is what is lacking in the exhibition: the artist addresses the issue from many perspectives, from micro-history to official narrative, but he remains on the edge, as if he did not dare really embrace his subject. His work is all about contours, detours, deviations and anecdotes, and the very detailed private stories do not
compensate for the vagueness of the global vision.