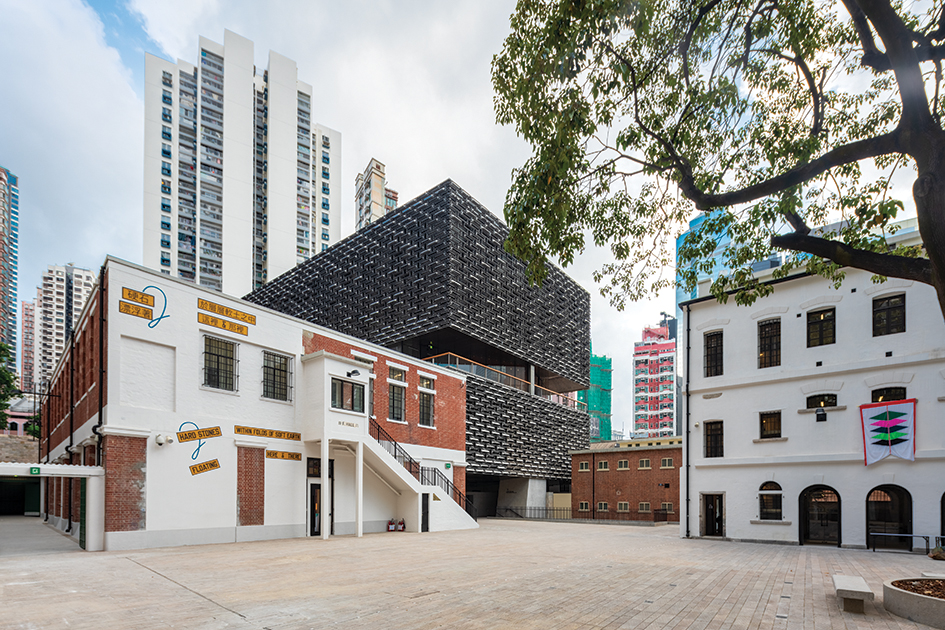 Hong Kong has a soft spot for crime and police stories. Films about gangs, double agents and bloody conflicts have long been a mainstay of local cinema. There is an underlying psychological reason: a surge of public interest in the genre occurred in the 1980s, coinciding with the UK and China’s negotiations over the 1997 handover. Amid anxiety about the political future, the movies often depicted the goings-on of crime syndicates and their clashes with authority to explore themes of loyalty, heroism and chaos. This blue-coat fascination laid the foundation for some of the most significant pop culture of the 1980s – and continues to provide inspiration today, in the form of the city’s newest cultural institution.

While Hong Kong awaits the opening of M+, its much-anticipated major museum of visual culture, the recently opened Tai Kwun Centre for Heritage & Arts is poised to tick the mid-size museum box. Built on a historical site, the 19th-century Central Police Station compound on Hollywood Road, Tai Kwun has an unusual cross-disciplinary remit. The centre (named after the compound’s Cantonese colloquial name, translated in English as ‘Big Station’) is billed as an aggregate of heritage conservation, performing arts and contemporary art, with year-round programming spanning all three fields.

Tasked with the preservation and renovation of the cluster of 16 historical buildings, including the Central Magistracy, Victoria Prison and Central Police Station (decommissioned in 2006), was UK conservation firm Purcell, while Swiss architects Herzog & de Meuron oversaw construction of two new aluminium-clad buildings. Sheathed in three-dimensional modules with oval motifs, the new buildings include a multi-storey gallery and an auditorium. The new additions’ names, JC Contemporary and JCube respectively, refer to the main funder of the project: the Hong Kong Jockey Club. According to Tai Kwun’s director Timothy Calnin, who formerly held managerial roles at Sydney Opera House and the Hong Kong Philharmonic Orchestra, conversation and revitalisation have cost about HK$3.8 billion to date. Given this financial backing and the huge value of Tai Kwun’s approximately 146,000 sqft lot in Central, the official stakes for the cultural centre’s success are high.

Bridges and labyrinthine pathways connect old and new sites within the compound, while open, retained courtyards like the Prison Yard and Parade Grounds are filled with sunlight and ample seating, reflecting the organisation’s desire to create a welcoming public space. The Prison Yard features public works by locally based artists Nadim Abbas, Izumi Kato and Gaylord Chan, as well as US conceptual-art kingpin Lawrence Weiner. About 30 shops and restaurants will soon be integrated onto the premises, with revenue supporting the ongoing maintenance of the heritage buildings.

Tai Kwun merges contemporary and historical Hong Kong in its materials, a combination of brick, concrete, glass and metal. This incorporation of official history underscores many of the centre’s ambitions, making it a palatable recipient of public funding. As part of the centre’s heritage programming, led by Winnie Yeung, eight “story-telling experiences” around the site let visitors explore prison conditions or retrace a 1930s officer’s typical daytime patrol. Permanent exhibitions, installations and wall texts also reflect the site’s cop-shop past, while school tours will be an important measure of the centre’s impact.

Heading Tai Kwun Contemporary, the centre’s visual-arts arm, is Tobias Berger, who assumed the role of head of art in May 2015, having left his role early as curator of visual art at M+ to take the job. With a team of 12 employees, the centre boasts seven gallery spaces and an 800-publication-strong artists’ library. German-born Berger positions Tai Kwun as something of a Kunsthalle, a utopian combination of disciplines complete with residencies, exhibitions and an art book fair, which is slated to take place in December. Berger says that because Tai Kwun is a non-commercial, non-collecting art centre, it has more freedom to take risks and feature emerging talent.

Tai Kwun’s first group art exhibition, Dismantling the Scaffold, opened on 9 June. Curated by Christina Li in collaboration with non-profit Spring Workshop, it will address the site’s history, using the scaffold as a main motif, as both a temporary construction support and a historical stage for public executions. Many of the 37 artists and 11 artist collectives or groups in the exhibition, including Xijing Men, Luke Ching Chi Wai and Big Tail Elephants, hail from Asia. Berger says that the focus of Tai Kwun’s programming’s isn’t explicitly Asian, but the institution will have an international perspective, looking outwards from Hong Kong. The first Hongkonger to stage a solo exhibition is Wing Po So, a young artist who grew up across from the compound and whose abstract sculptures are made from Chinese medicine.

While Tai Kwun is a welcome, much-needed addition to Hong Kong’s chronically underfunded non-profit ecosystem, its romanticising of colonial police authority is raising eyebrows. The British established the Hong Kong Police Force in 1841 to dominate what they considered an unruly, crude local population using Victorian methods. With the influx of poor refugees from mainland China in the 20th century, the police strengthened their resources to face increasing civil unrest and disobedience. The preserved prison cells on the Tai Kwun site are evidence of such British authority: each tiny cell held three prisoners, with a total capacity of a few hundred bodies. During the Second World War the Japanese army used the compound as a base, and two decades later the military units deployed to control the anti-colonial and leftist riots of 1967 were stationed there.

Is this the history that Hong Kong people want painstakingly and expensively preserved? While evidence of Beijing’s exercises of authority crop up in Hong Kong, the theme-parkisation of colonialism, incarceration and correctional systems for a public audience seems off-key. Members of the art community also recently reacted with scepticism and outrage to the announcement of the opening in 2022 of the Hong Kong Palace Museum, which will house artefacts from Beijing’s Palace Museum. Irked by the museum’s role as soft nationalist propaganda, Hongkongers were upset with the lack of consultation before allocating public funds that are sorely needed by other non-profit art organisations.

While around the world statues, monuments and other symbols of colonialism are being dismantled, a question lingers over Tai Kwun’s opening. By its very nature, contemporary art questions authority, power and institutional repression; how can it be exhibited beside carefully preserved, permanent relics of all three?

Image, top: One of the two major outdoor spaces at Tai Kwun, the Prison Yard was used as a space for prisoners to exercise, and now hosts performances and cultural programmes. Courtesy Tai Kwun.